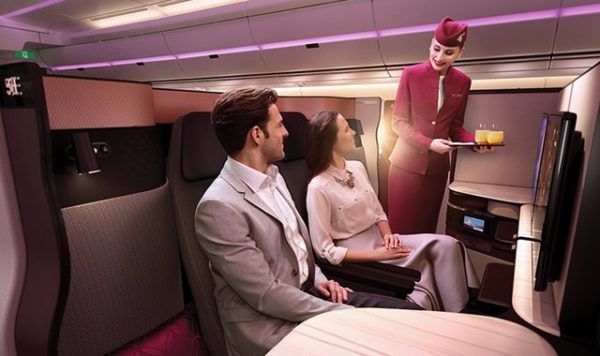 The new seat design was first unveiled by Qatar Airways Group Chief Executive, His Excellency Mr. Akbar Al Baker, moments before the airline’s annual press conference at a reveal ceremony, on the opening day of the ITB Berlin exhibition, at the Qatar Airways stand. Attended by an audience of VIPs, including His Excellency Sheikh Saoud Bin Abdulrahman Al-Thani, Ambassador of the State of Qatar in Germany, with the Mayor of Berlin, Mr. Michael Müller, as special guest of honour, guests were captivated as a life-size cross-section of a Qatar Airways aircraft featuring the new QSuite.

The patented seat has been two years in the making. Its anticipated unveiling drew media from around the world and up until the reveal had kept industry experts guessing as to what features and developments it would include.

QSuite features the industry’s first-ever double bed available in Business Class, with privacy panels that stow away, allowing passengers in adjoining seats to create their own private room. Adjustable panels and movable TV monitors on the centre four seats allow colleagues, friends or families travelling together to transform their space into a private suite, allowing them to work, dine and socialise together. These new features provide the ultimate customisable travel experience that enables passengers to create an environment that suits their own unique needs.