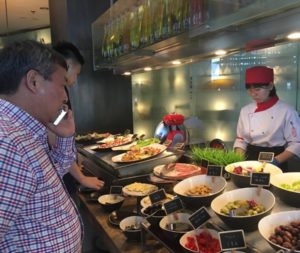 Lunch at Ritz-Carlton Shanghai Pudong turns out to be a lesson in produce. Sandro Gamba, the chef here, has even put displays of tomatoes, and vegetables, on the table instead of flowers, and then he brings small tasting dishes of purées made from some of that produce – it is so difficult, says everyone, to find local farmers and when you do come across a treasure there are challenges of volume, and consistency. The gal first met Sandro Gamba when he cooked at Noma, at Park Hyatt Chicago, and he has always been a produce fanatic: here, this luxury hotel really attracts locals, partly because of its copious buffets – notice how the diner in the photo on the left is multi-tasking, choosing food and talking on his ubiquitous device. 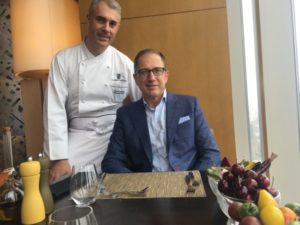 Sandro Gamba comes over to talk to Rainer Burkle, who opened this 285-room hotel as GM, back on June 21st, 2010 at precisely 11.08 a.m, obviously a really auspicious moment. Rainer Burkle has now moved on, and up, as head of luxury, Greater China, for all Marriotts. He has 30 hotels, including Hong Kong and Macau, and in his list of 12 to-come, ‘pipeline properties’, he will have had four openings in 2017 in Shanghai, alone. As well as St Regis Shanghai Jingan, which opened three weeks ago, he has a Bulgari, an Edition and a W hotel, all within ten minutes of The Bund, on Puxi side. Like all his colleagues-competitors, he knows there is a need to be as efficient as possible with labour, which means, from the very start, clever design. How can the route from unloading dock to kitchen storage be simplified? 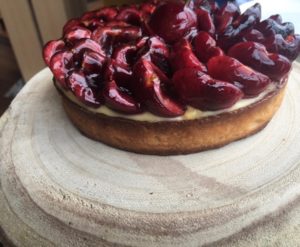 This is one of the superb luxury hotels that is owned by Hong Kong-based SHKP, whose bosses are helped by long-time hotelier, and former Ritz-Carlton guy, Ricco De Blank. Here, the owners commissioned Cesar Pelli to design the 58-floor building, which has a rooftop Flare bar – its dedicated elevator looks like a cellar, with real wood shelves, real green bottle ends, and when you get up there, you find it is indoor-out, with a glass-fronted 12-foot wide fire (and some of the wood beams, in an area designed by Super Potato, are formed of recycled Shanghai wood). There are a multitude of memories here, including a 53rd-floor indoor infinity pool, 70 feet long with a bit vitality hot tub. The knowledge, by the way, try to stay here in the 4,500 sq ft Ritz-Carlton Suite, which feels like a jewellery shop – or, if that is taken, make sure you have entry to the excellent 49th floor Club lounge.