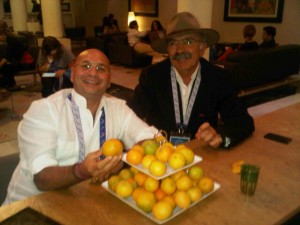 One reason the girl chose to be in Marrakech at this time was PURE – proper name PURE Life Experiences.  This is an ‘experiential’ show put together by Serge Dive and Sarah Ball.

946 people came in from all over the world (media, alone, came from Mexico City round to Shanghai). There were 370 ‘exhibitors’, people showing off their private islands, their honeymoon villas end of a promontory in Mozambique, boating in the Amazon, cycling in Jordan.

Exhibitors pay their way, and thus they tend to stay in Marrakech in the less-expensive digs.  The alphabetical list of exhibitors ran from  255uncharted, a safari operator based in Devon, through to Ziniry Norwegian adventures. 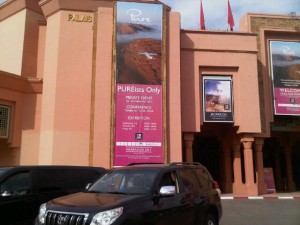 There were also 405 ‘buyers’, travel agents, known variously as private club controllers, travel professionals, personal concierges and the like. Buyers are hosted, which means they were staying in the more lavish hotels, including Es Saadi (both the Hotel and the Palace), Four Seasons and Mamounia.

Some of the most interesting buyers included a sky-high Ukrainian woman who is packing people off to the Maldives (specifically Four Seasons, Jumeirah, Naladhu, One&Only Reethi Rah and W Maldives) and a Dusseldorf concierge trying to cooerce a group to head for Pyongyang to celebrate the Great Leader’s birthday. 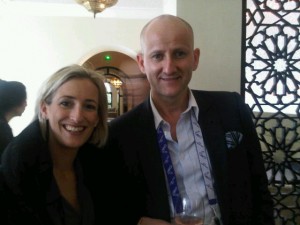 PURE is minutely organized.  Ahead of time exhibitors input which buyers they want to meet and vice versa and a computer programme gives everyone a detailed be-there-or-else schedule.  You get half an hour, 20 minutes to talk one-to-one and five minutes before and after for the buyers, who do the walking, to get from their previous appointment and on to the next, for more talking.

No-shows are recorded, and are not invited back.  An elaborate memory-stick aid, Poken, enabled people to stick their sticks together to note details that could be downloaded later, though the girl (and some others) preferred to stick to business cards.

Experience matters.  The word luxury was never mentioned at the show itself.  It did just manage to raise its head at the opening conference, when Serge Dive discussed story-telling with Chris Blackwell (who discovered Bob Marley, U2 and others and then set up Island Outpost), the MD of private client services Geographic Expeditions Kate Doty, and the commonsense Financial Times travelista Sophy Roberts. 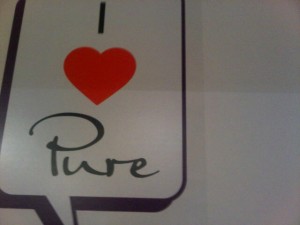 There were PURE signs up everywhere

It was she who pointed out that her six year old son, when travelling with her in Bhutan, suddenly got ‘into the experience’ when chatting to a local boy, the same age, about weird animals.   Luxury was, to any of these people, not having a programme that was so tight that tourists felt rushed.  And luxury was definitely not being nickel-and-dimed in hotels.

It was nonstop networking. During designated coffee and tea breaks many congregated in the lobby of the Hotel Mansour Eddahbi, where the WiFi worked, or usually. At lunches at the hotel, one quickly worked out it was good to arrive early, when the buffets groaned with marinated artichokes and other goodies.

These PUREists are hungry people.  The opening night’s party, at a desert camp among palm trees in the Palmeraie region, was a seated affair with ample coke but wine aimed at minimal drinkers and a gigantic tajine where the first person served at each table got the bird, so to speak. 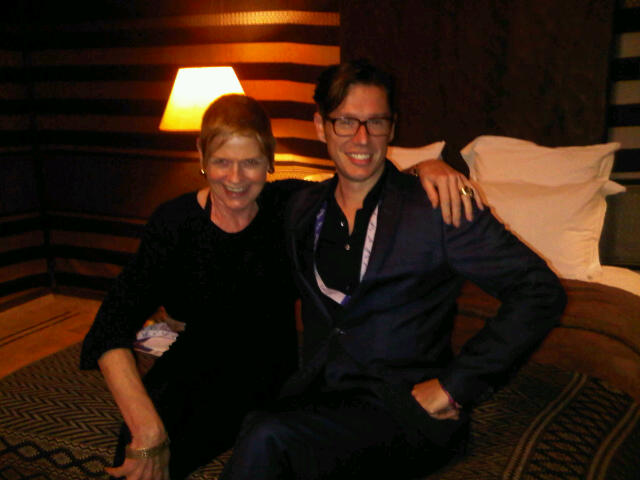 Fortunately the next night Sofitel Marrakech Palais Impérial hosted a poolside party with bars aplenty and food stations that endlessly groaned with sushi, kebabs and made-to-order risottos in whole Parmesans.

The final night’s wrap-up party, at Palais Rhoul, was somewhat inconvenienced by nonstop rain and much of what would have happened outside moved in, to decadent tents and bedrooms that are built around 270-degrees of the gigantic pool (about 50 metres across) into which, surprisingly, no-one managed to fall.

Everyone, overall, had a good time, and worthwhile.  Every single person the girl spoke to is looking forward purely to the next gathering in Marrakech (November 12-15, 2012)  www.purelifeexperiences.com