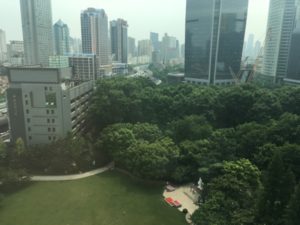 Looking down to Jinga’n Park

The gal has, like everyone without exception who has seen it, raved about The PuLi, a hotel that is not only unique in Shanghai but pretty rare throughout Asia generally. The nearest comparison is Swire Hotels’ Temple House in Chengdu, but whereas that was built around and above two century-old houses, The PuLi started from nothing. A Taiwanese entrepreneur, Gino Tsai, who more or less invented modern-day scooters, got architect Kume Sekkei to design a 26-floor building that is perfectly in sync with the adjacent Jing’an Park. Even the arrival, via a bamboo-lined grey brick walkway, makes the 229-room hotel feel part of its surroundings, says the gal. 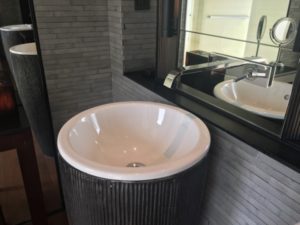 Inside, the interiors by Johannes Hartfuss, from Melbourne, typify what feng shui would be if it could speak. But you only speak in hushed tones here, in public areas – I guess the volume of the typical Chinese voice gets lost in the high ceilings. Perhaps it is something to do with the fact that this is a very creative hangout. This hotel sees a lot of business from the fashion and beauty sectors, as well as the advertizing and banking that is prevalent in the Jing’an area (45% of all those who stay are repeats). I was merely day-rooming here, which sadly meant no chance for a bath or shower looking straight down into the park: both parts of the bathroom are right up against the outside wall. 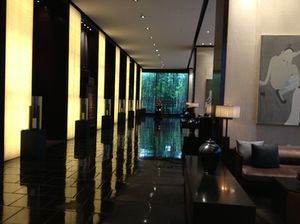 Look along the lobby corridor…

We lunched, surrounded by locals, in PHÉNIX Eatery & Bar, up on the second floor, which showed me yet again that if the appeal is right, discerning diners will get into an elevator and go to an upper floor to a hotel restaurant. The chef, Michael Wilson, is also from Melbourne, and he knows how to present beautiful as well as tasty food – see his zucchini salad, above. The previous evening, by contrast, he and Jan Tibaldi, the GM here, had gone much simpler when catering a function on the hotel’s ground floor outdoor terrace, one-bite hamburgers, or oysters shucked to order. That was just the right tone, then. The PuLi always seems to be a success. 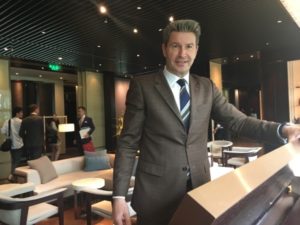 This is one luxury hotel, by the way, that does not believe in ratings – Jan Tibaldi goes by the success of return, people coming back, and spreading the word (the PuLi is consistently in the top-ten on Tripadvisor, which has over 5,000 properties in Shanghai). He is always thinking of ways to make a hotel better – in the photo on the right he holds the top of the restaurant bar which pulls forward, at breakfast, to make a buffet counter.  He was destined for the hotel world, he says. His mother met his Italian father at Lausanne EHL and his own career includes Four Seasons, Oberoi and Viceroy and he joined Urban Resorts, which manages the PuLi, in 2013.