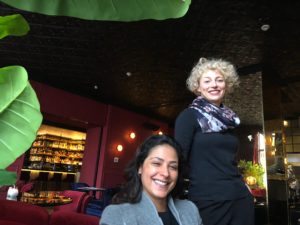 And now, for a completely different luxury hotel, one that would cause some travellers’ jaws to drop in amazement.  Where, for instance, can you be met by a bellman looking as if he is straight from Cabaret? (He raves about the hotel’s customised Giant bikes, “look, electric”, he gesticulates – he is German-speaking, the gal is Anglo-phone.)  Well, for unique one-off experiences, head for Provocateur Hotel, Berlin, part of the Gekko Group, whose founders, Berliner Micky Rosen and Romanian Alex Urseanu, were honoured this January by Germany’s most important assessment, from AHOZ General Hotel and Gastronomy, as hoteliers of the year. 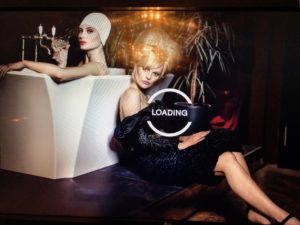 This is a hotel, says GM Julia Himburg, for those who want something different, who love cabaret plus burlesque plus sexy elements. Every one of 58 rooms has a wall-set screen, four feet high by about three feet wide, that plays a 45-minute black-and-white romantic movie when so required. Main television sets have home pages that ooze Hollywood. All rooms have high ceilings, dark one-colour walls, unvarnished wood floors. Bigger rooms have prominent, raised-on-pedestals bathtubs.  There are several glossy colour magazines, including Playboy, German-version, with several pages of voluptuous frauleins topless and, in many cases, bottomless too – all seem to have had a Brazilian wax, or airbrushing. This was, in today’s #MeToo world, somewhat surprising. 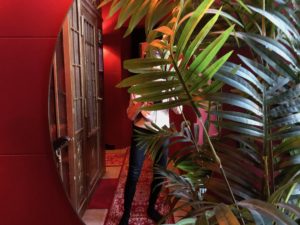 Mirror on the main staircase

The basement of the building used to have indoor bowls, back in 2011 when this was built as a townhouse for a wealthy individual.  Today that space is being reimagined for weddings and other purposes. A lovely courtyard comes into its own during summer.  Rest of the year, the deep-burgundy velvet snug/main-bar/restaurant serves as meeting place for locals. On a Sunday night, when the main kitchen, which serves Chinese-French from Vietnamese chef Duc Ngo, gives way to such snacks as braised short rib meat with cucumber slices in soft yeast buns, and wontons filled with bamboo and shrimp.  I ate in my room, with a glass of Becker Family Pinot Noir 2013, from Schweigen, on the Alsace border, but downstairs the bar was filling up, with Berlin ladies dressed to the nines in mid-calf cocktail dresses and, in at least one instance, a noteworthy hat. 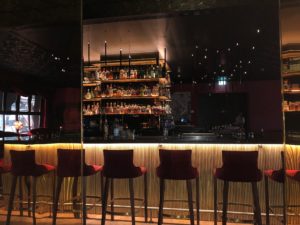 One view of the C-shaped bar

At breakfast, however, the whole dining area was devoid of guests but a hubbub of young German team members were cleaning and polishing. I went for my usual yoghurt and eggs, though the avocado on toast that Julia Himburg chose looked delicious.  The menu, in a leather cover, is all à la carte, and the first time includes a hangover breakfast. You get a cigarette, a coffee and a vodka shot.  Really?  Yes really, and the cigarette is real, but you have to go outside to smoke, of course. They have sold two of these breakfasts in the last two months, says the charming young male receptionist.  This is indeed a most unusual luxury hotel. AND NOW SEE VIDEOS OF ROOM 410, AND THE BREAKFAST ROOM