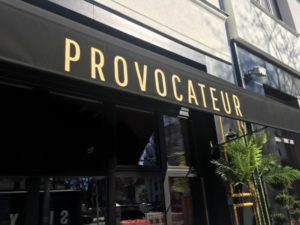 There are already luxury hotels galore in Berlin but, as 25hours Bikini Berlin found when it opened a couple of years ago, there is always room for one more, as long as it offers a wow product with differentiation. The gal went to visit Provocateur Berlin, a member of Design Hotels – it opened March 6th 2017. It has a prominent street front, on Brandenburgische Strasse at Konstanzer, a few minutes’ walk from Kurfürstendamm and already, in the spring sunshine, locals were at street-set tables enjoying aperitifs. It needs full summer, however, to do justice to what will be a really popular outside terrace, shown in designer Saar Zafrir’s computer rendering, above. 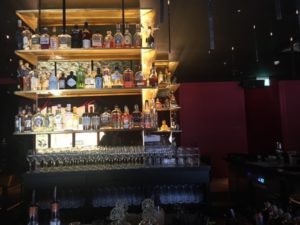 The bar has a central counter

The five-floor building was put up in 1911 as a townhouse for Wilhelm Gutzeit and, ahead of its time, it had an elevator, which is still used, and a basement bowling alley, which is not (it will become a meeting space). Micky Rosen, Alex Urseanu and Liran Wizman, who work as the Gekko Group, bought the building, and instead of converting it, as they have other buildings, into a Roomers Hotel they obviously thought this was just the type of burlesque setting for a Provocateur, which their friend Zafrir, who hails from Tel Aviv, designed to order. Glamorous, provocative and unique are the buzz words, imparting the allure of 1920s Paris with current Berlin. The main floor’s restaurant, Golden Phoenix, is a partnership with their Vietnamese pal Duc Ngo, whose best-sellers include pork buns, dragon prawns, honey barbeque pork ribs and whole catch of the day. 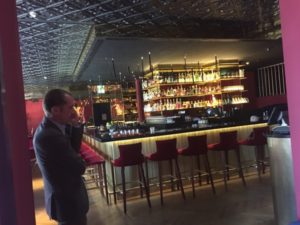 The restaurant, like the adjacent bar, is a haven of deep red velvet, including banquettes, with some brown velvet chairs for variety – these match what look like embossed brown leather ceilings. The bar is dominated by the enormous serving area, with an array of gins that of course includes Hendrick’s but also some I did not know, like The Duke. Ronald Spicale, the Berliner who runs this hotel, expects both the restaurant and the bar – complemented in summer by that outside terrace, really to attract the locals. He took me upstairs to see some of the 58 bedrooms, which come in deep red or, my favourite, deep blue colour-ways. Take room 105, as in the video below. This is the blue colour-way, and it certainly is unique. 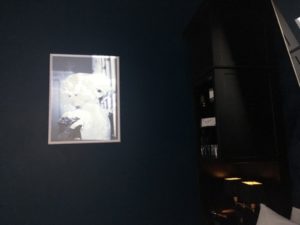 All rooms have video screens

Flip one of the deliberately-retro switches by the bedside, in any of the rooms here, and what looks like a blank screen, perhaps a second television screen, spurts into action in the form of a 45-minute black and white burlesque-meets-Amsterdam-red-lights video. This is just the moment, says Ronald Spicale with a knowing smile, to open the bottle of Ruinart in the drawer-type minibar that is, handily, right by the bed. The bedrooms are, indeed, so well thought out that if you chose, as I would, one of the most bijou, admittedly only 160 sq ft, you would still have everything you might need, include Jacob Jensen phones, Marshall radios and Nespresso machines, and even an LG television if you tire of the video. As I said, there are unique features in this luxury hotel, and now I wonder what the Gekko Group guys will do with some of the other buildings they own: Aby Rosen is already co-proprietor of Gramercy Park in New York, and Liran Wizman is an investor in W Amsterdam as well as running Europe Hotels – Private Collection EHPC. These are names to watch. Their next opening is Roomers Munich. NOW SEE THE VIDEO TOUR OF ROOM 105, BELOW