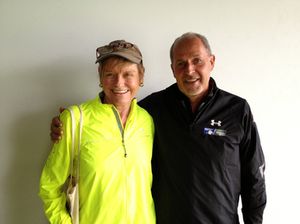 Time for the boys, gal, and there is no better place in Provence than Terre Blanche Hotel Spa Golf Resort, up in the hills, 20 miles northwest of Cannes.  The luxury resort is set somewhere in the middle, roughly, of 750 acres of river valleys and wooded slopes, with mediaeval villages all around.  Golfers go crazy here, especially since this is the base of former osteopath and professor at the University of Montpelier, Jean-Jacques (JJ) Rivet.  He heads what is said to be Europe’s only Biomecaswing Performance Centre, here at the resort. Using science and wizardry, this is said to improve the swing of players at every level – see a YouTube video. 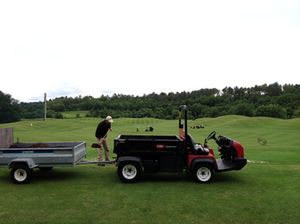 Clearing a section of a course

The resort has two courses, both designed by Dave Thomas. Le Château is 7,235-yard par-72.  Le Riou is 6,567-yard, par-72. There are 300 Terre Blanche club members but those staying in the 115-room hotel can also play.  I watched, by the Biomecaswing building – which has its own Technogym – as groundsmen prepared one section of the course, for something or other. I noted how golf bags seem to get bigger than ever, with more clubs than before, and presumably pockets for your GPS as you could easily get lost in the sculpted landscapes here. 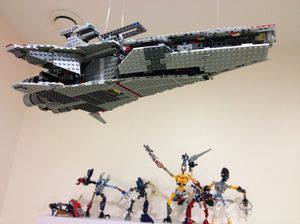 Toys for (and made by) boys

Younger boys have lots of fun here, too.  Most kids’ clubs are too girlie but this one is different.  I watched a guy of about ten playing patience on one of the two giant Mac computers standing on specially-low tables (those at the kids’ club are only allowed a maximum of 60 minutes’ computer use ever day, and their usage is watched).  Next door was guy heaven.  A 20-inch long Lego plane ‘flew’ overhead and, on a nearby shelf, Lego warriors stood as if in order.    There is plenty of room here, at this family-oriented hotel, for boys under 13 to feel as perfectly at home in the kids’ club as their sisters do. 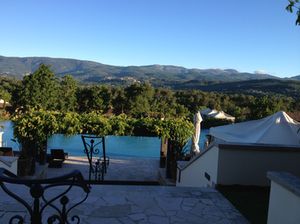 View over the main pool

All the hotel’s ‘rooms’, by the way, are villas, minimum size 600 square feet with a sofa in the tiled-floor living room that can make a second bed.  Some suites have individual pools but I actually like the 80-foot main outdoor pool (the same length as the stunning indoor pool, with adjacent outside vitality area, in the really-significant spa). After swimming you can, if necessary, dry your Vilebrequins on your bathroom floor, divinely heated as if for that purpose. 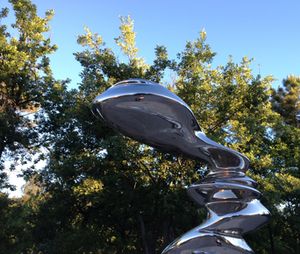 Really fit guys can also head for tennis – David Leadbetter has an Academy here.  You might be lucky to coincide with soccer, at least in practise form.  Terre Blanche’s creator Dieter Hopp has two main sports interests, golf – and soccer.  He built a field here for the German team to practise on before Euro 2012, and they obviously had a great time staying here even if they did not make the final. Guys can also, from 7am any morning, head for the (LifeFitness) gym in the spa, or have an oxygenizing Dr Ivo Pitanguy facial. The culturally-minded, meanwhile, can be exploring the resort’s art. 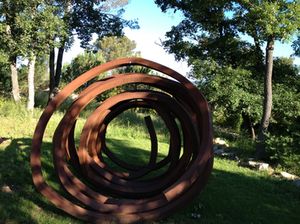 ..and one by Bernar Venet

There are amazing sculptures dotted around the buildings and the grounds. A shiny steel shape that rears up to top off as a snake’s head is by Londoner Tony Cragg, who also did a distorted wood head in the main lobby.  A mass of rusted metal circles (which actually looks best in the rain, though of course it ‘never’ rains here in Provence) is by French conceptual sculptor Bernar Venet.  Now who runs everything so beautifully at this independent luxury hotel?