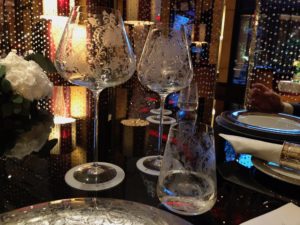 At glorious Principe di Savoia, Milan’s oldest luxury hotel, dating back to 1927, the specialist who runs it, Ezio Indiani, had pulled out all the stops for the gal.  Dinner was in Table au Cristal, a corner of Acanto restaurant: the space was tantallisingly only semi-private, shielded from the gaze of the many by curtains of threads of Swarovski crystals.  The table, as shown here, was set completely with pieces from the Stefano Ricci collection (that maestro has a fashion boutique on the hotel’s ground floor, by the elevators, and a homeware display on the lowest level).  Yes, everything from china to silverware and napkins, and even hold-your-breath cutglass glasses, are all Stefano Ricci: still family-owned, the 47-year old company is now run by Stefano and Claudia Ricci’s elder son Niccolo, whose brother Filippo is creative designer. 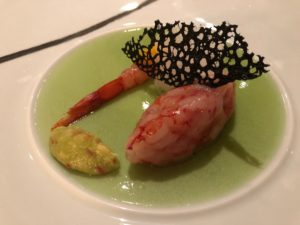 We both eschewed chef Alessandro Buffolino’s six-course tasting menu.  I started with a red prawn on cucumber jelly, with ginger and mango, and went on – well, when in Rome – to a Milanese.  It must be on the bone here, apparently, which means that the cooked effect matches its nickname, ‘elephant’s ear’. It came with a separate dish of halves of tiny cherry tomatoes and what they called ‘French fries’ but I would name potato puffs. Our delicate Ricci drinking glasses held a Lombardy wine, Neggiola Nino Negri from about 120 km away. Ezio Indiani was filling me in on the European Hotel Managers Association, EHMA, ee-ma, of which he is now President, for a three-year term. His intent is to extend a mentoring programme, whereby some of his 420 members mentor heads of departments in other hotels, and to incorporate diversity.  He also wants to take his GMs into schools to spread the word of the value of hotel life. 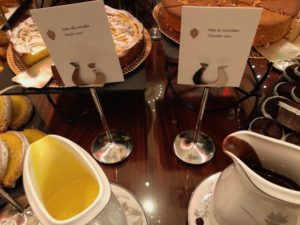 Cakes, with appropriate sauces, at breakfast

He wants EHMA to be trusted as the first source for hotel owners and operators, and for media. There is, frankly, nothing elsewhere quite like it, cross-border and representing a variety of cultures (Ezio Indiani says what can be done in Milan cannot be done elsewhere, even in Rome or Venice).  And, after such an informative and pleasant dinner I passed on the elevators to hike yet again up 156 carpeted stairs to the sixth floor, to #637.  This is one of the hotel’s 160 sq m Imperial Suites, decorated by Celeste Dell’Anna, who trained on Italian film sets. This suite is theatre-style, as a video below shows: it has a plethora of lacquered woodwork, some extremely bold artwork, and rich and lavish fabrics, and the bathroom is Hollywood magic. 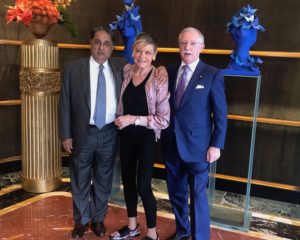 And for Acanto, which he also designed, he has put in not only the theatrical Table au Cristal but also a colourful ceiling – see above, at the top of the article – that all can share. I was already feeling in a playful mood as I began to leave.  The outer lobby of this exciting luxury hotel has some whimsical sculptures, just of heads, all one colour – most are nearly Klein blue, some a day-glo tomato (they are all by the Neapolitan artist Antono Nocera). And then, as Ezio Indiani appeared, just in time to say goodbye, who else should turn up but MPS Puri, whom I last saw at some conference or other.  This was a much more exciting venue. SEE THIS SUMPTUOUS HOTEL’S SUITE 936, AND ITS ROOFTOP VIEW