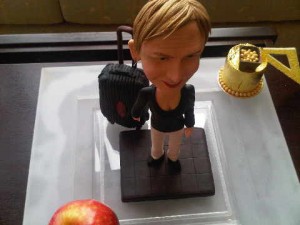 A mini-figure, made of chocolate and complete with 'Rimowa wheelie'

Most women would probably admit that as little girls, they wanted to be princesses, at least for a day. Now, in today’s crazy and so often superficial world, many youngsters dream of being celebrities.

Some hanker for this at a much earlier age, going in for mini beauty competitions. Or a bit later, blogging, as Canadian Tavi Gevinson did at 14.  Also in today’s topsy-turvy world, there is no anonymity. The gal found herself a celebrity for a day, at the Futian Shangri-La, Shenzhen, China.

Somehow, the luxury hotel’s sleuths found out what she looked like (not so easy as Google works elsewhere in China but in Shenzhen, one of China’s two ‘Silicon Valley’ areas, it is impossible). 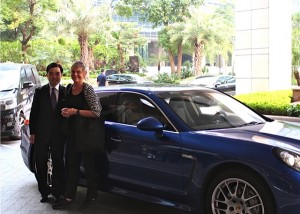 Emil Leung, GM of the luxury hotel, was there to greet, on arrival

Even the arrival was princess-for-a-day.  At Shenzhen airport, the greeting posse consisted of two expat managers in bespoke grey suits, two young women in chic scarlet skirt-suits with black tights, and butler James Xing who had been flown in from Pudong Shangri-La, Shanghai, especially for the visit.

The arrival was shown elegantly into a royal blue Porsche Carrera and driven the half hour to the Futian area of Shenzhen, where she was greeted by the 596-room hotel’s GM, Emil Leung, whom she had last seen – he told her exactly – in Chongqing.   This was interesting as I have never been there.  I must have a double. 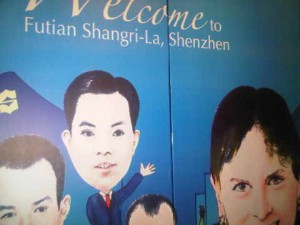 The inside of the elevator door shows caricatures of the princess, and hotel management

Anyway, next stage is getting to the room.  I did wonder if I would be given a tiara and fairy wand, and perhaps wings (my mind wanders to the glass-walled wine towers at the Radisson Blu hotels at London Stansted and Zurich airports, where the female sommeliers wear white body suits with little wings, and they get into harnesses to fly up the ceiling-high wine towers to pick the appropriate bottle…).

But this is even better.  One of the 38-floor hotel’s six elevators has been personalised.   The video screen by the door says ‘welcome Sharon Stone’.  The door itself has been covered with caricatures of all key people, including Emil Leung and the theatrical head of food, a Lebanese guy called Bechara Sader. 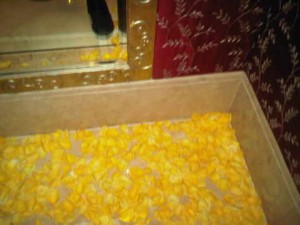 The elevator floor is covered first by red, then by yellow, rose petals

On arrival, the elevator floor is strewn with burgundy rose petals.  From the ceiling chandelier hang individually-suspended burgundy roses.  From one rose hangs a jigsaw bit. Every person I meet gives me another jigsaw piece.  In my room I find a caricature jigsaw with several pieces missing.

When all those bits are put in place, the jigsaw is framed, ready-to-go.  When the clock strikes midnight, all this does not return to its former Cinderella state.  My 24 hours as princess continue, with the roses and petals in ‘my’ elevator switched from burgundy to yellow. 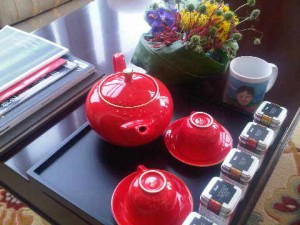 Welcome tea, with a selection of leaves

Suite 3818 is suitably fit for a princess (or even someone as important as King Abdullah of Jordan who, I gather, took his motorbike with him to Lima last week – this suite, which is a staggering 2,900 sq feet, has plenty of room for a full range of Ducattis or Harley-Davidsons).

Whoever stays here gets a full bar, enough fruit for any fruitarian nutcase, and an elegant Chinese tea set.  Ask, and it shall be given here.  I am sure Emil Leung would provide a tea ceremony artist if I only asked.

Come to think of it, butler James, who knows the princess well and keeps magnificently out of the way, though he is always outside the door whenever I go out, could probably do a tea ceremony as part of his repertoire. 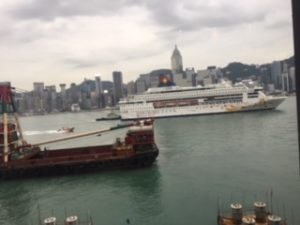 This is a luxury hotel not only for glitterati and royalty but for serious business.  This is where top CEOs stay.  Apple, Goldman Sachs, IBM, Sony and Target have regional headquarters here. The IT and financial worlds are drawn to the Futian area by the magnets of the 21st century, namely money and success.

From 3818, look down at the incredible Civic Centre with an undulating roof that dwarfs that of Marina Bay Sands in Singapore.  You can also see what will be the Shenzhen high-speed train station that will, from 2015, link Hong Kong in a staggering 17 minutes.

By then, too, Shenzhen Stock Exchange, one of three stock exchanges in China, will have moved here, to a new building with cantilevered lobby being designed by Rem Koolhaas of OMA (adore his Seattle Public Library). 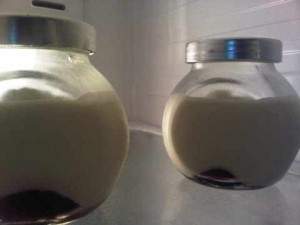 Any top executive staying here at Futian Shangri-La Shenzhen would thoroughly appreciate the many VIP points that are so thoughtful (if you only have 30 minutes to spare, the spa girls will say no problem, and Alina can do one of the best upper massages ever).

As with all Shangri-Las, you find a full office kit in a desk drawer – why don’t all hotels realise that ALL guests, from time to time, need a pair of scissors, elastic bands and so on?  Someone has put an extra quartet of electric sockets on the desk top, and the sockets are the type that take European, UK and US plugs.

Again, thoughtfulness, appreciated as much by VIPs as any other guest.  And how about a minibar that holds not only the usual ghastly selection of teeth-ruining colas but also home-made real yoghurts? 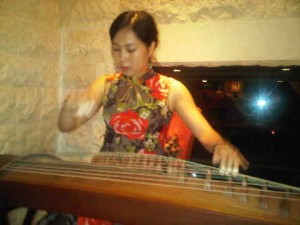 .. sheer artistry as a girl plays a pipa during dinner

After a really good workout in the gym, and a look at the indoor pool that was quite full of quite energetic Chinese kids, I get ready for dinner.  Shang Garden is my kind of Chinese restaurant, young and fun, with an upper mezzanine where diners at the single table, named for one-time Shang boss Giovanni Angellini, can look down at the rest of the diners in the 138-seat restaurant.

The lazy susan in the middle of the table twirled around so we could taste stewed green beans, and foie gras in green paste, and yummy beef cheeks, and all the while a lovely lady played a pipa, like a flat lute. And later, over drinks in the Shang Garden’s terrace, we sat at an underlit red glass table and listened to more music, from a blonde American jazz pianist Amandah Jantzen.

And soon, of course, the 24 hours came to an end and my spell as princess for a day was over.