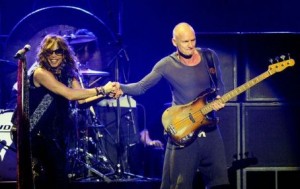 Sting, also known as one-time schoolteacher Gordon Summer, sang a few ditties last night here in Marbella – the gal was invited but had to decline, much to the delight of the hungry horde waiting for any returned ticket.

He came with Live Nation to perform for the Marbella Club, who presumably gave him a jolly good supper after he had sung for it.  He was actually due to do his gig at the tennis courts of Puente Romano, the second massive Marbella Club property just west of it.

Well, there is a hundred-yard gap between, still barren.  Apparently that is owned by someone who lives along the coast but he cannot get hotel permission as now all new hotels have to be set 200 metres or so back from the coast. 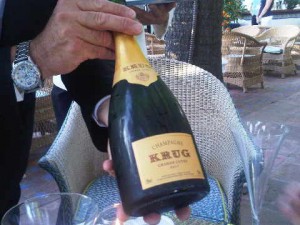 A glass of the usual, on the Champagne Terrace of the Marbella Club

The night before, life at the Marbella Club was as it always is, packed out 100 percent right through to the middle of September.  Honestly, the style here is amazing.  Ask for a glass of Champagne and the house pour appears to be Krug, although you can switch to Pol Roger Cuvée Winston Churchill and if you drink alone in the privacy of your divine room, suite or bungalow, you find Moët in the minibar – and no, although WiFi and your Nespresso and the Tea Forte is free, of course you pay for the minibar.

But you do not come to Marbella Club to be a cheap-ie, just a value insist-ie… whatever you pay here, it is more than worth it.  Over 56 percent of all guests come again and again and looking at the vehicles parked by their doors (well, it did start out as a motel, albeit a royal one) some have come a long way. 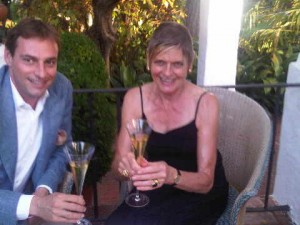 Franck Sibille, who is Group GM of both fabulous luxury resorts, admits he initially came reluctantly.  He is a long-time Hyatt honcho who took a brief respite to try to get the would-be Mandarin Oriental (the one that featured as an Abu Dhabi hang-out in Sex and the City II) open in Marrakech.  Please come and see us, pleaded Count Rudi – of whom more anon – and he came, and not only stayed but raves about this paradise on earth.

And that is actually what the 27-acre Marbella Club rather feels like.  It is a narrow strip of land, about 150 yards wide, stretching from the busy main road (do not go there, no need) down to the Mediterranean (to which everyone feels a need to flock).

This was all a hacienda called Finca Santa Margarita when, on behalf of his father Max, Prince Alfonso Hohenlohe-Langenburg bought the land and all that went with it and housed a few friends (who could park right by their bedrooms), which led to a Club, which became a hotel.

Pretty soon, too, the Prince started planting trees, sub-tropical palms and pines and yuccas and much more, which have now matured a couple of stories high. 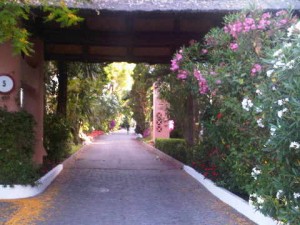 The main 'drive' from north to south of the Club property

The main drive today stretches from the main Bulevar Principe Alfonso von Hohenlohe road to the beach as, thanks to the Prince’s landscaping, one long tunnel of sweet flowers, trees and bushes. As one regular Brit, singer Bryan Ferry, says ‘the gardens offer so many little corners in which you can disappear’.

Certainly during my visit the other guests, who stay at least a week at this time of year, mostly seemed to have disappeared.  135 rooms, all full, adults and some kids (no pets allowed, and by the way no shorts or jeans at dinner) – where was everyone? Perhaps they were in the hotel’s Brioni store.

Seeing a stone by the main drive, bearing a plaque that showed the site of the then-motel’s paddle tennis court, gave an idea. 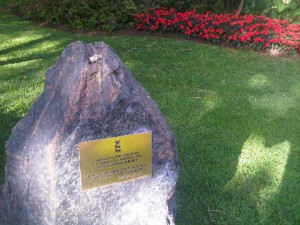 A plaque marks the site of the first paddle tennis court ....

Ah, perhaps everyone is keeping fit.  This is not a place for the lethargic and/or couch potatoes.  This is for high-achieving, high activity people, both in the brain and physical sectors. A gym right here at Marbella Club is promised before the end of the year but until you then are either shuttled to the Puente Romano Tennis Club or you take an initiative test and find it yourself.

I walked along the ten foot-wide pristine sand travel way, Urbanizacion Marbella Mar, that flanks the beach (also pristine) for miles around here.  Marbella has 15 miles of beaches in all and wow are they impressively maintained.  The travel way is a corniche with no cars (only bikes and buggies) and not a sign of litter.  This place is authentic luxury, what real people want today. 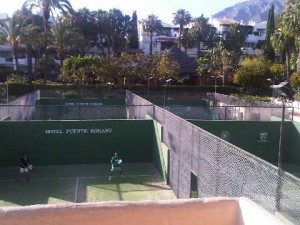 ..looking down, from the busy gym, at one of today's paddle tennis courts

To try to find the gym I asked a shuttle driver in one of the E-Z-GO buggies, and a security guard on a Segway, and a water vendor on a plastic chair, and followed some signs and went from the corniche inland and around and down and up and by the time I finally found the gym I was all warmed up.  It was worth it.

While pumping the Techno bit I was looking down at some of the club’s ten tennis courts and simultaneously at the television screen, watching Spain’s hero, Rafael Nadal, being pushed out of Wimbledon by the world’s hundredth best, Lukas Rosol.

Nadal is Spain’s second Wimbledon men’s champion, after Manolo Santana, the 1966 hero, who coincidentally is manager of the tennis here at Marbella Club.   I looked down in another direction and watched a furious paddle tennis match, and remembered that plaque back in the main club. 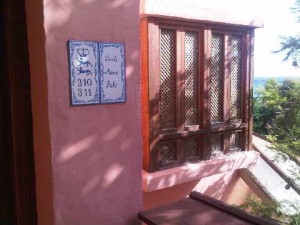 Then a hike back to my room, 310, the Marco Polo Suite, in the big terracotta-hued four-floor building by the beach that also houses the spa.  Up terracotta steps from ground level, into my home, just redecorated by Jean-Michel Martel, who has also worked on The Ritz Madrid.

Love the sleek champagne-coloured walls, with colour from seating and cushions (soft rhubarb purée and soft sage) and a champagne gauze veil flung over the top of the outline-only four-poster.

Love, too, the 20-foot across terracotta balcony, looking into trees and down at the corniche and the beach (colours of the terrace furniture are buttercup and leaf green). With a computer provided, and excellent WiFi and the view, and the Moët in the minibar, it was tempting to stay in. 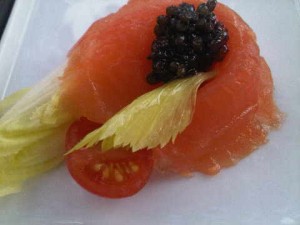 But no, the Krug and the company at The Grill terrace called.  Tables soon all filled up, with expensive hairdos and even more expensive jewels and lots of chatter, mostly English but with some German and other European tongues.

We all sat on deep-red wrought iron chairs with matching cushions, at pristine white tables lit not only by floodlights in the trees around but by gigantic displays of candles, their wax deliberately falling on to stalagmites that have been dripping since The Grill opened 50 years ago.

The maitre d’, a 40-year veteran called Alfonso, suggested a grilled veal chop, but of course chef Juan Galvez sent out things to start, including smoked salmon that followed the Krug pretty well.

The sommelier, Angel Gonzalez, who seems to hold every award in Spain, had thoughtfully chosen a Pagos Viejos Artadi 2004 Rioja (the most expensive Spanish wine, he says, is the Pingus made by Peter Sisseck, oenologist of Hacienda Monasterio, but production is limited to 5,000 bottles, sold only if the quality is exceptional).

Back to the meal.  Along came a Grand Marnier soufflé and along came midnight.  These Mediterranean types do eat late…. the history of the Marbella Club and the Prince and my new friend Count Rudi must wait until tomorrow…