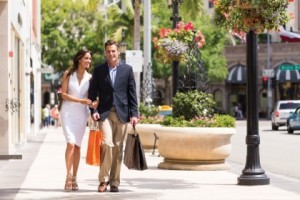 Pretty Woman was released in 1990 and Beverly Wilshire Beverly Hills, a Four Seasons Hotel, the luxury hotel where much of it took place, is making the most of that quarter century. Anyone can pay to pretend to be Julia Roberts and hole up in a Pretty Woman suite, have a Skinny Girl breakfast (poached eggs with country toast, spinach and grilled tomatoes), take a personalised shopper along Rodeo Drive – and why not, asks the gal, add in a chauffeured Rolls-Royce to take you to LA Opera, or the newly-opened Wallis Annenberg Center for the Performing Arts? 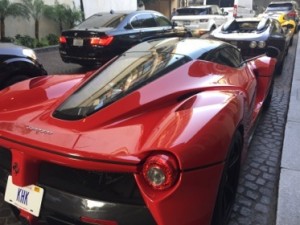 .. and a suitable line-up of cars

Beverly Hills is the gateway to Los Angeles, I am told, but I would actually add that Beverly Hills is the gateway to high style in the USA. Nowhere else has such an accumulation of designer cars, as seen here in the hotel’s drive-through entrance. How many driving through, by the way, know that set on the roadway’s cobbles are scarlet letters, ‘Vaya Con Dios’, go with God? In the main everyone in the area drives at snail’s pace, obviously mindful of the famed Beverly Hills Cops… The hotel has its own house-car service, driving you everywhere within a three-mile radius, but personally I love walking around as there is so much to see. Even this hotel has its own inhouse stores that are, well, glamorous. 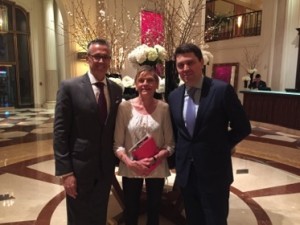 Escada occupies the entire left hand corner of the Wilshire Boulevard, as you look at the hotel from outside, and to the right, set into a mostly-glass wall looking into THEblvd restaurant, are two double-sided vitrines, one for Rémy Martin and the other for Jason of Beverly Hills, who has a store within. He, Jason Arasheben, is a fine example of the great American Dream. While still in his second, sophomore, year at UCLA he found he had run up $28,000 on credit cards so he started selling trinkets for around $20. That has led to his current $20-million-a-year business, providing bespoke jewels for Mariah Carey, LeBron James, Rihanna and certain members of the Saudi royal family. 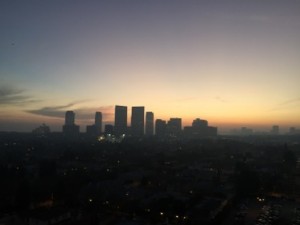 Sunset over Century City, from suite 1407

Yes, this is a fascinating luxury hotel.  It hosted Alfre Woodard’s annual Piper-Heidsieck pre-Oscars dinner last weekend. At all times, it is  ideal for the rich and famous and those who love creativity. I meet up with the GM, Ben Trodd, who tells me about so many innovations that my head is awhirl, and we take a photograph in the main lobby with Thomas Krooswijk, who currently heads food here. Ah FOOD, yes, even Pretty Woman has to eat…