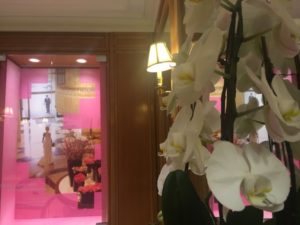 The Beverly Wilshire, a Four Seasons Hotel in Los Angeles’ Beverly Hills city, is California’s equivalent of Washington (State’s) Olympic, a venerable treasure that has, through continual botox injections, kept even further ahead than up-to-the-minute. The two have other things in common. Seattle’s Olympic was once a Four Seasons – it is now Fairmont, with a recently-opened Four Seasons a mere six blocks away. And the opening GM of that hotel, Four Seasons Seattle, was Ben Trodd, who is now GM of the luxury Beverly Wilshire hotel, which is managed by Four Seasons. Before she had lunch in the off-lobby THE Blvd with this very-English personality, the gal popped in to the Beverly Wilshire’s ladies’ washrooms. As always, you can tell luxury when washrooms have real towels, and, as here, fresh orchids. 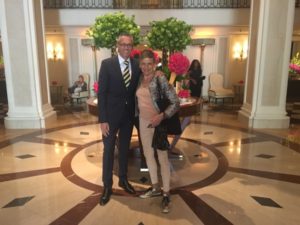 As always, Ben Trodd was full of news. The day before, Beverly Hills’ tourism boss Julie Wagner had unveiled the City of WELLTH campaign. Her team flew in top model Christie Brinkley – a vegetarian since she was 14 – and nutritionalists, and Bodyism founder James Duigan, who now has his global headquarters in the just-opened Lanesborough Club, attached to The Lanesborough in London. The Beverly Wilshire, said Ben Trodd, who had wanted, despire his headmistress mother’s insistence that he should consider a career in music, to be a professional sportsman, is, like other sponsoring hotels, offering special packages, in this case, an overnight with a superfood detox wrap, and a sweat-it-out pop-up at the spa, which has, importantly, a rare Forbes five-star rating. 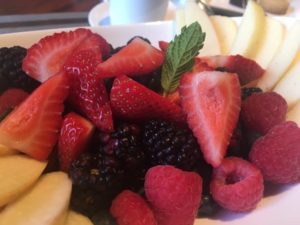 Luxury, to Ben Trodd, means taking risks and yes, sometimes there are failures, but you find a way, somehow, to recover. He is currently finding a solution to overcome the fact that Los Angeles will lose the big-income Grammy’s in 2018 – possibly thanks to bigger money in New York. Never mind, he plans a big Grammy’s party, with a gigantic screen, on ‘the night’, January 28th, 2018. Before that, he is doing all he can to increase his Chinese business, knowing that travellers from Beijing, Shanghai or wherever will love the fact that this luxury hotel is just across Wilshire from Rodeo Drive. As I finishednew chef Jeffrey Cristelli’s superb grilled salmon salad on Italian farro (yes, being English I ‘finish’ food rather than toying with it) I noticed a young Chinese couple coming in to eat. As if dressing for the Pretty Woman movie, she had a black Ascot-type hat, the shortest black shorts that decency would condone – and a three-foot selfie stick. Every luxury hotel produces memories, these days.