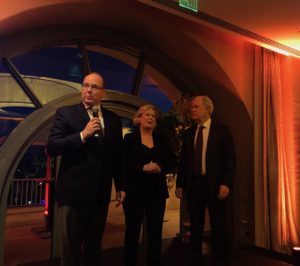 Annual meetings of Preferred Hotels & Resorts are always worthwhile, and fun, partly because the company, owned for the last 15 years by the Ueberroths, seems like an extension of this friendly and hospitable family.  This year’s event, at SBM’s Monte-Carlo Bay Hotel, 25-28 February, 2019, was the most stylish yet. The 274 delegates were welcomed at the opening night cocktail by none other than HSH Prince Albert, who liked the gathering so much he stayed around for at least an hour, talking and really listening to many of the luxury hoteliers.  There were, incidentally, quite a few newcomers to Preferred, which has seen its now 772-strong portfolio grow in the last year to include, for the first time properties in Hungary and Sardinia. There is also noticeable growth in hotels that have de-flagged from brands – this list includes The Dominick, New York (formerly Trump Soho) and The Inn at Perry Cabin, St Michaels MD. 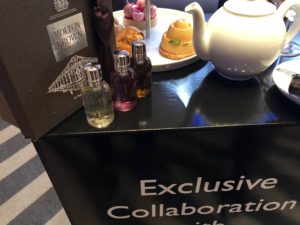 Preferred has a good crop of suppliers who showed their wares during three days of educational meetings – I was particularly impressed by Molton Brown, which showed how they work together with a hotel to theme its afternoon tea. I think, too, that Brojure, developed and run by Penny Wing, will pick up a lot of business for its easy do-it-yourself online brochure software.  In the main conference venue, sessions were emceed by Peter Hancock, a very-English type with an unending fund of Churchillian stories (he is a professional toastmaster who once produced Johanssen’s but his day-job now is CEO of the Pride of Britain consortium). Preferred Executive Chairman John Ueberroth said disruptors are here to stay but they are not hurting business. His daughter and CEO, Lindsey Ueberroth – who is determined Preferred, and its pineapple logo, will be the most recognized luxury hotel company of independent properties – referred more than once to her belief in the power of travel. 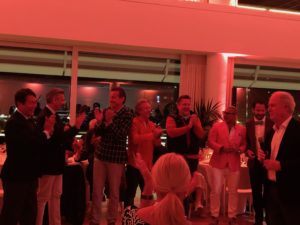 Boating fashion at the Yacht Club

In 2018 Preferred saw its I Prefer loyalty membership soar 20 % to over 500,000 new members, taking the grand tally over three million.  We heard of such brand extensions as Preferred Hospitality Solutions, headed by Kathleen Cullen, which offers member hotels help with, say, branding, pre-opening, PR and social media, revenue management, sales. We heard about pop-ups to promote Preferred properties in Amex Centurion lounges. Plenary speakers included Kate Ancketill, founder and CEO GDR Creative Intelligence, who stressed the need to be different: want to create a brand? Think DNVBs – Digital, Native, Vertically-integrated Brands – she urged the need to be critical (start out by looking at what is already there), to limit your range (tell potential customers this is the ONLY thing you need), to think lifestyle, to un-think the norm, and to spread the word and talk about it. 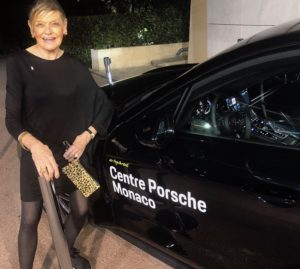 Porsche arrival at the Gala

David Bailey, CBRE, shared development, supply and demand figures and forecasts; F&B conceptor Tobias Mattstedt, Beyond Hospitality, showed why and how hotels’ restaurants can work. And talking of food, there was a stunningly sumptuous jazz buffet at the exclusive Monte-Carlo Yacht Club, and at the final gala we were all reminded that luxury hotels that are part of Preferred can take advantage of the brand’s new partnership with Porsche. So, over one or two glasses of Laurent-Perrier, gala guests sat down to tuna tartare, lamb cutlets and chocolate profiteroles with entre-acts that saw the presentation of Preferred’s Awards of Excellence. Hotelier of the year is Stephan Stokkermans, Grand Hotel Huis ter Duin, Noordwijk aan Zee. Global hotel of the year is Leela Palace Udaipur (how fortunate that Rajiv Kaul, President of The Leela, was able to fly in a few hours before). Hotel of the year US and Canada is Edgewood, Tahoe NV. Hotel of the year Mexico and Caribbean is Condado Vanderbilt, San Juan. Hotel of the year Latin America is Unique, São Paulo. Hotel of the year Europe is The Alpina Grand, Gstaad. Hotel of the year Africa, Middle East and India is The Imperial New Delhi. Hotel of the year Asia Pacific is The Siam Bangkok. New hotel of the year is Post Oak Hotel at Uptown, Houston TX. New resort of the year is Montage Los Cabos. The I Prefer hotel of the year is Pacific Gateway at Vancouver Airport. SHARE H.S.H.’S WELCOME SPEECH