Spanning Australia’s biggest ‘corridor’, Sydney to Melbourne and back, the gal came across a variety of travel aids.

There were the cruise ships docked, two each day November through February, in Sydney’s harbour.

Running along Hickson Road, west of Park Hyatt Sydney, she came across a travel aid that was going nowhere – a car as roundabout pinnacle.

That was on the way to Fratelli Fresh, one of the branches of an Italian providore concept that has become a local cult.

It is part deli, with only a few really good items to buy, and part casual bar and dining place (more than a café but not a restaurant).

You sit up at the bar, at a table inside or out, or even, as we did initially, on window sills.  There is no printed menu.  You look at what is hand-written on big blackboards to see what is on today.  Everything is fresh.  And yes, once again we had tomatoes.

I do not know what it is but tomatoes seem to be on every menu, everywhere, these days.  The brains behind Fratelli Fresh turns out to be a New Zealander, Barry McDonald, who runs the empire with his younger brother – but he cleverly gave 10 percent of the venture, from the start, to, respectively, an investment banker, a successful retailer and an Italian who helps him with concepts.

After this the girl ran on again, over Observatory Hill to The Observatory (outside was another kind of vehicle, the wedding car that is ubiquitous worldwide).  Exercise is so good for the thought process.  Jog jog, think think.

She thought of that other great lunch, at Café Sydney atop the Custom House in Circular Quay, looking across at the Opera House. There was breakfast in the rooftop Club Lounge of the InterCon, and a room service dinner in the new steel-coloured suite at the top of the Four Seasons.

And that memorable dinner at Sydney’s tallest restaurant, Altitude, some 34 floors up. And, north of Sydney above Whale Beach, Alfonso Alés’ outstanding cooking at Jonah’s.

Last August the Sydney Morning Herald’s critic Terry Durack gave Jonah’s a staggering 16/20… I knew Durack when he was even younger, first writing for Melbourne’s The Age and then London’s The Times and he is not easily impressed.

Ah Melbourne… dinner high up again, at Vue de Monde, for Shannon Bennett’s marathon, and the comfortably-chic Radii for an introduction to Riverina-cross beef.  And tomatoes again, at the Royal Automobile Club of Victoria (generally known as RACV). 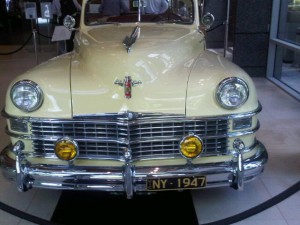 1947 Chrysler, on display in the lobby of Royal Automobile Club of Victoria RACV

Wow, what an operation.  It is run by local girl Caroline King who has returned after running hotels and clubs in England.  Now she heads a ‘city’, with 500 employees.  Figures are staggering.  30,000 members. Over 1,000 lunches served every day (nearly 1,100 on Christmas Day).

Dine from fine dining through to buffet, or in a wine cellar or a bar, and the football-field-sized gym is packed and the five-lane indoor pool is one big splash.

There is even a full 112-room luxury hotel with all mod-cons (24-hour room service).  From time to time one of the members even parks a car here to show off to colleagues… 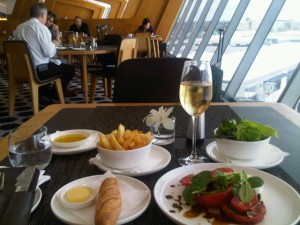 Quick snack in Qantas' First Class lounge at Sydney airport and back on a flight, gal

It was time to leave Australia behind.  The last supper, so to speak, was in Qantas’ First Class lounge at Sydney airport.

You enter via a curved corridor with ceiling-high living wall of greenery (the designer is Marc Newsom, helped by Australia’s top fashion designer, Collette Dinnigan – she who did the Dom Pérignon bar in The Establishment).

Wow, the dining room upstairs looks spectacular, with an architectural diagonal theme. Black-suited servers, who all work for Sofitel, glide rather than bustle, and food is cooked right there, in front of you.

Bon voyage, gal – where are you going next?