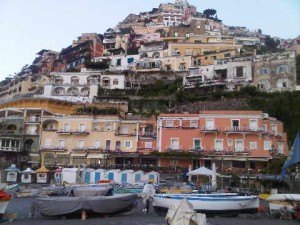 An expansion of the view looking at west Positano from Le Sirenuse (taken at dawn, from the harbour)

Positano is a dream place, wrote John Steinbeck in 1953. ‘It isn’t quite real when you are there and becomes beckoningly real after you have gone’.

It certainly seems real to the thousands of Americans, Brits and Others who overwhelm the charming little fishing village every summer – and yes, the gal was one of them but she only stayed a night. 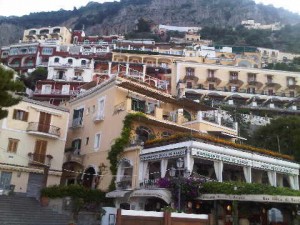 Turn through 180 degrees, and you get a similar vertical vista of the east of Positano

There are only 3,882 native Positanesi and they must feel drowned in visitors. Fortunately the mayor, Michele De Lucia, is a fisherman, and he obviously understands the importance of tourism.

Positano is like a central ball of wool stuck down by the ocean, and those driving along the Amalfi Coast, either from west to east or the other direction, can miss it altogether unless they make an effort.  The main road, highway 163, passes far above the town centre, although the suburbs have reached up to it. 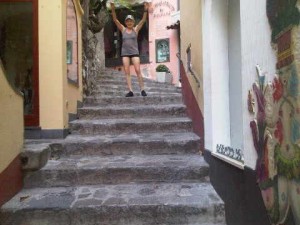 Down by the harbour there is a rabbit warren of narrow lanes, many of them stepped

The only way to get down into the town is to take the one turning at the west of the area.  This takes you down a one-way series of hair-raising zigzag bends to the top of the ‘ball of wool’ and then up again, past Le Sirenuse and back to the main highway.  Even the locals do not go against this one-way system.

The focal point of the town is the coloured maiolica ceramic dome of the main church, Santa Maria Assunta, and around it alleyways and buildings are crammed and jammed into every available space. Look up west – as you can from the terraces of Le Sirenuse – or east, and you see a Cubist-painting of buildings, closely packed on the steep hillsides. 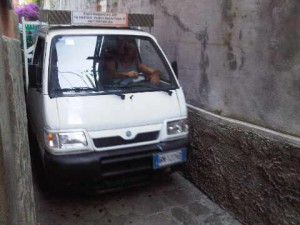 Specially-narrow utilities trucks ‘do the necessary’ at dawn, before the hordes arrive

Positano is the epitome of a town that demands that you keep fit (diet before you come here). There are so many steps your calf muscles ache, and that is after only one night, and ‘commuting’ only from Le Sirenuse rather than from highway 163 where many are forced to park, and hike down or take a bus.

From Santa Maria Assunta, a rabbit warren of flights of steps and five-foot wide lanes leads down to the grey-shingle shore that is the ‘beach’. It is worth getting up early to see the utilities at work.  Garbage is picked up by mini-trucks that clear the lanes with only a few inches either side. 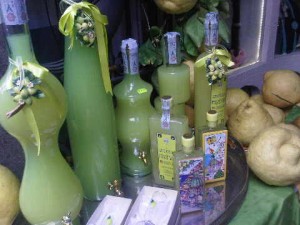 This is THE home of limoncello, they say

Day long, the town will throb with tourists.  They know about Positano because they  have been here before, or because they are encouraged by its appearance in such films as Under the Tuscan Sun, 2003, or Finding Positano, A Love Story, 2010. Mick Jagger and Keith Richards wrote their 1969 blues opera Midnight Rambler in the cafes here. Positano is Mongibello in Patricia Highsmith’s 1955 tome, The Talented Mr Ripley. 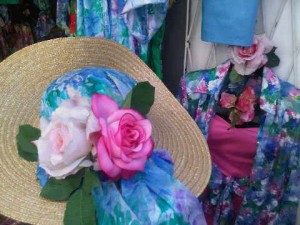 Some of the lanes, and alleys leading off them, are a flower garden of gear for girls…

This is THE home of limoncello, say the locals.  Many of the tiny boutiques offer anything to do with lemons, and display some of the biggest whole fruits imaginable.  There are lots of expensive cafés, and tiny hole-in-the-wall panini places.  We found an ideal little place, Capricci (Via Regina Giovanna 12) and each chose four marinated-vegetable creations from a buffet hygienically administered by servers in white coats and royal blue hats.  We sat outside, at tall tables, and watched the passers by. 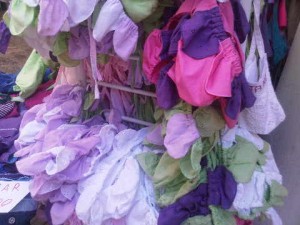 Some come to gawp, some to savour the atmosphere and shop.  The alleys are hung side-by-side with displays of women’s hats, and all-white cotton robes and colourful babies’ dresses.  There is definitely a Positano fashion look, hippy meets Capri.  Unfortunately not every foreigner here is a beautiful person ….

The really beautiful people are up at Le Sirenuse, a Leading hotel – though they do venture down, including in the evening to go clubbing at joints that do not seem to finish until three or so (I know, I heard some returning). 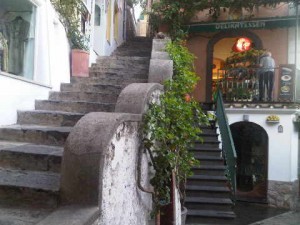 Dawn is definitely best time in Positano: a venerable local is getting his grocery shop ready for the day

If anyone spends over a thousand euros in cash these days the shop, or hotel, or bar or restaurant, has to declare it to the authorities, so presumably repeated sales of Dom Perignon are no more, though it is all right to pay by credit card.

There are also lots of beautiful people down in the harbour at dawn, but they are all locals.  Fishermen are returning, road sweepers are doing their things, as are their colleagues the garbage collectors in those tiny trucks.

An old man is putting out wares for his tiny grocery shop. There is one more runner, later seen also refuelling from the excellent breakfast spread in Le Sirenuse.  What a sensible fellow.