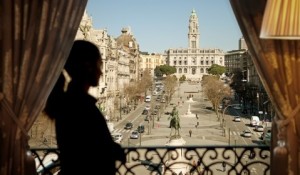 The gal got into Porto, also known as Oporto, after dark, so the view at daylight the following day was all the more awe-inspiring. Room 308 looks over Praça de Liberdade, with its 1866 statue of Dom Pedro IV by French sculptor Anatole Calmeis. At the far end of the Praça is Avenida dos Aliados. The luxury hotel at the south of this impressive square, which dates back to 1718, was a convent, Palacio das Cardosas, built by the religious order of Saint Eligius. What a busy man that saint was, by the way. He appears to be patron of goldsmiths and all metalworkers, coin collectors, veterinarians and horses, which makes having Dom Pedro IV here, mounted on a steed, all the more appropriate. 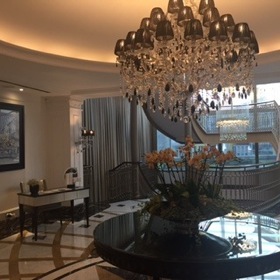 What later became known as Monastery of Santo Eloy, short for Eligius, opened in 2011 as InterContinental Porto Palacio das Cardosas. Outside, the four-floor original façade is unblemished. Inside, lots of sparkling marble adorns the ground floor flooring, with glittering crystal chandeliers, with drops, overhead. Alex Kravetz is the designer here. His other works include Park Hyatt Baku, Hyatt Regency Thessaloniki, the rooftop of Grande Bretagne Athens, and InterContinental Moscow Tverskaya, and here he seems to go for subdued colour in upper floors. But down in the lobby, and its charming Cardosas bar, everything sparkles and glistens. A piano in the bar is ready for action, and you have excellent views over the Praca. 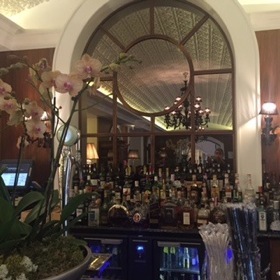 Portuguese are not surprisingly proud of their history, and you certainly find that pride here – apart from the French GM, Eric Viale, every one of the 85-strong team is local. They do not even leave the 105-room hotel: Eric Viale reports losing only two staff a year, and those as transfers to other InterContinentals. They are obviously too happy here, especially when they receive a bonus as they did in 2014. Eric Viale was InterCon’s GM of the Year that year, and he swapped the Mini Cooper that he won for cash, which he shared out with the entire team. It is not surprising that they are all so enthusiastic. I went to ask the concierge something. He was busy with someone else. Immediately, as if by magic, a young bellman appeared from nowhere to ask if he could help at all. 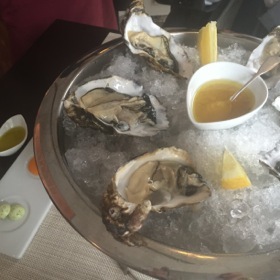 I lunched with Eric Viale in Café Astoria, the luxury hotel’s long-time square-facing restaurant that many regulars think of as ‘an outside restaurant’, nothing to do with the hotel. Here, the white room is highlighted by deep burgundy crystal falls in its clear chandeliers. I tried the oysters, great big ones from Foz do Aresto, and smaller ones from Algarve. And then, as everywhere, every time, every hour here in Portugal, we were brought little egg custard tarts, one bite each, ideally with cinnamon dotting their tops. Ah, food in this lovely country…