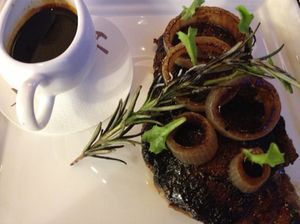 Pittsburgh steak, jus on the side

A Pittsburgh steak is charred on the outside, rare within. The result is related to a quick-fire South African brai (barbecue) technique of putting newspaper in a metal bin and setting light to it.  The flames leap up, to reach fat on a steak on a rack above. The fat drips down as if from a tap, and feeds the blaze and in a couple of minutes, or less, your steak is done.  That method may well be carcinogenic, but the Pittsburgh steak, as produced by that city’s luxury hotel, Fairmont Hotel Pittsburgh, is nothing but goodness.  Some say that the origin of the name comes from searing the meat with a welding torch, others that workers in the local steel mills cooked steaks on cooling pieces of steel.  Who know, and who cares? 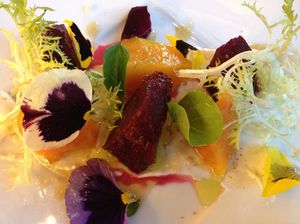 Dinner at Habitat, the hotel’s all-day restaurant, produced an outstanding Pittsburgh steak, grass-fed, from Burns Angus Farms in New Wilmington, an hour’s drive away (the hotel chef… prides himself on using local produce).  He butchers inhouse.  Habitat has an open kitchen so you can see the chefs meticulously preparing your dish, which comes with onions, and a jus – in my case, on the side.  I ordered mushrooms, and roast Brussels sprouts.  My starter, by the way, had been roast organic beets from a local farm, Maple Valley Farms, with goat cheese and wild-flower honey and coriander.  My friend started with an all-day bacon-and-eggs, an imaginative dinner version. 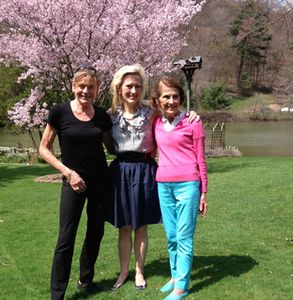 The bar at the Fairmont is Andy’s, for Andy Warhol, whose prints are throughout the hotel.  His famous likeness of The Queen is in the restaurant, and behind the concierge desk are a selection of witty prints.  Lying behind the concierge is the hotel dog, Edie, who today looks far from witty (though she is undoubtedly pretty).  It is too hot for her. The temperature has soared to nearly 90 degrees, which meant that I was able to lunch outside, no, not here at the hotel but with my friends Susie Fitzgerald and her daughter Mollie, who run Frontiers Travel. Three little girls from travel are we, talking about nothing else.. except life. 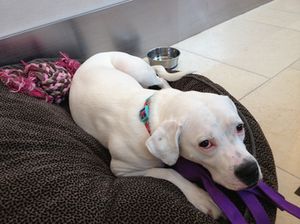 Edie lives behind the conciergerie

And then it was back to my temporary home, and to its fabulous workout area. They have taken fitness seriously here (well, the Pittsburgh marathon is May 3rd, 2013, and the boss of the hotel, Matthew Sterne, is currently away in New Orleans doing yet another triathlon).   The hotel’s LifeFitness gym is 24 hours and has really good supplies of fresh fruit, a big plus.  I wonder whether celebs of the calibre of Justin Bieber and Madonna work out here when they come and stay? Tom Cruise, who was here for a long time with Katie Holmes when shooting Jack Reacher, undoubtedly followed the TC rule and asked for equipment in his room (sorry, suite). 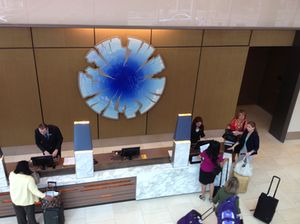 Sunburst behind the reception desk

There are masses of ways of keeping fit, here in Pittsburgh.  Run to the rivers, namely the Allegheny, Monongahela and Ohio – from the hotel, it would take you under half an hour to look at all three of them. Go out into the square protected by the glass sculpture that is PPG Place and follow pre-teens in running round and round its centre, or stay in the hotel and run up and down the 48 stone steps leading from the lobby to the upper floor restaurant.  Do that ten times and you are ready for yet another meal. 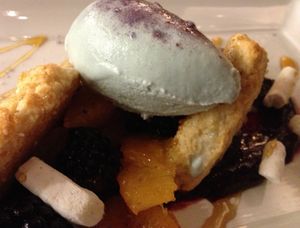 Try some of their desserts.  The chef sent out a selection, and they were all delicious, especially the violet icecream that went with what they call ‘black berries in bloom;, with thyme honey, crisp vanilla meringue sticks and blackberry jam. A doorman in a black bowler hat asked if I had had a good time in Pittsburgh. My honest answer is do not take any destination, in the world of travel, merely on hearsay.  Pittsburgh, its culture, architecture and people, and its luxury hotel, all are fabulous.