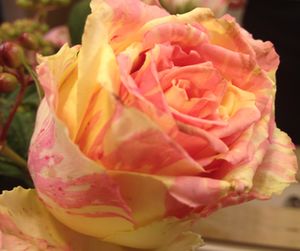 Stunning rose at the pink hotel

Stay at a Langham luxury hotel and you feel literally in the pink.  Pink is the corporate colour. from edge of business cards and hotel stationery to flowers in the gal’s bathroom.  She is in The Langham Melbourne, which has been TripAdvisor’s best hotel in Australia, in the South Pacific and even in the world. What makes it so good?  It was time to find out.  First, it was incredibly easy to find, set as it is in Southgate, the big development on the south bank of the Yarra River across from Flinders Street Station. 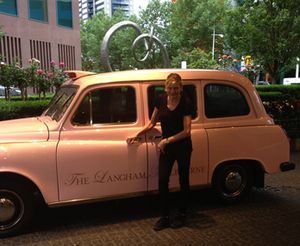 I arrived by walking under the rail station and across the pedestrian bridge that leads straight to the hotel.  This is the bridge that is collection point for thousands of locked padlocks.  Tourists leave’em behind, anyone leaves’em behind, and everyone takes photos.  Some people arrive at the hotel by its own taxi, a proper Manganese London taxi, painted pale pink (I do not think they had one at The Langham Pasadena, the last Langham I stayed in – perhaps US laws would require too much vehicular alteration). 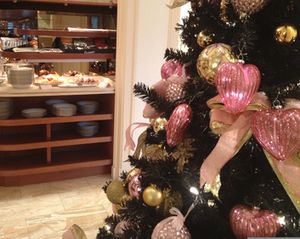 Even the Club Lounge tree is pink…

At the 387-room hotel, everything works – yes, I know, you say, well of course it does, this is a luxury hotel.  Sorry, not true. Thanks to the ideas of many interior designers today, far too many hotels have completely incomprehensible light switches and heat controls, and showers that have NASA complexity.  Here, by contrast, you have really easy light switches and air conditioning systems.  Room 2310 is one of seven Terrace Suites, a one-roomer with a 1,000 sq ft terrace, big enough for a cocktail for 30, looking down at the Yarra below. It gives you access to the superb 24th floor lounge, open 24/7.  The Christmas tree up there is pink, by the way – it was amazing that the Pilates balls in the gym, also open 24/7, are not pink. 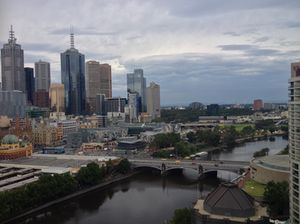 .. though the view from the lounge is grey, today

Looking down from the lounge, it is really grey today.  I can see the ugly Federation Square building, which looks even worse in the grey light.  I can see the Yarra, where I will be running early tomorrow morning.  Head out of the hotel, along the Southbank towpath, under St Kilda Road and keep on past the boat houses, the Melbourne Rowing Club, Brighton Rowing Club and others.  The big doors are open, early morning, as the crews bring boats out and get them ready to put in the water. There are literally dozens of craft in each boathouse.  I head on, to the next bridge (City Road) and then head back, to shower.  Yes, easy-work shower and instant hot water. 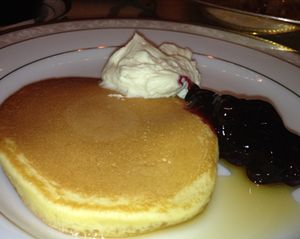 The Club lounge breakfast includes the hotel speciality, pancakes – and they are not pink. They are simple, small pancakes, which you cover liberally with cherry compote, and maple syrup and oodles of whipped cream.  Which goes first, I ask.  Any way you like.  Being a bit of a nosy parker I head downstairs to the main restaurant, the Melba, named for Dame Nellie, she of the toast, and the peach dessert.  Pancakes again, and so many fruits, and a Chinese chef and a Japanese chef, and even the liquid chocolate fountain that I saw last night at dinner. 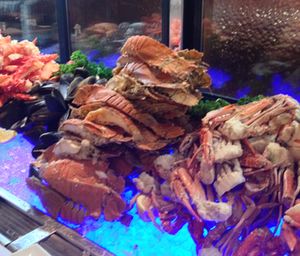 And OH that dinner, where there was lots of pink, in the form of sushi and every variety of seafood imaginable.  This honestly has to be one of the world’s best seafood buffets, and no wonder they are charging A$199, plus alcohol, for it, tonight.  On a value scale, as well as taste and service, it gets ten out of ten (another good point for its TripAdvisor rating).  To show how locals assess its worth, this luxury hotel’s restaurant seats 230 and yet it has done 500 dinners tonight.  Work out the arithmetic.  It is hard to believe that anything in this year’s Melbourne Food & Wine Festival, February 28 to March 16, 2014, will be as good as the offering in this luxury hotel.