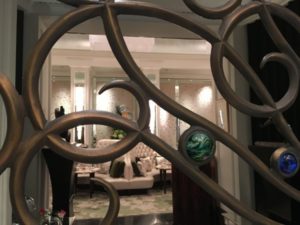 Looking through at the Palm Court

The gal is always really happy to return to a luxury hotel after a short time to find everything is even better. When The Langham London first opened in 1991 as Langham Hilton it had an over-the-top Champagne and caviar bar that was great for management but not for guests (they did not use it enough). Doormen wore tartan, which was entirely inappropriate as this is an English, not a Scottish, hotel. Now the current management, under Dutchman Bob van den Oord, is trying to make this lovely hotel even more English, with a global touch – which he provides, as do such enthusiastic team members as Franco Beci, shown above. 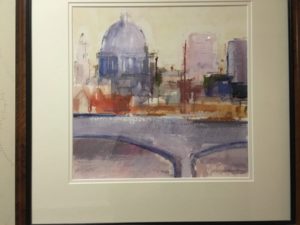 A water-colour along an upper corridor

Inside the building, first opened in 1865 by the Prince of Wales, it is very definitely English. Look through into the rear-lobby Palm Court, above left. One of the paintings on the ninth floor corridor – up 214 carpeted steps from the lobby, if you prefer exercise to elevators – shows St Paul’s Cathedral. English products pop up time and time again. In my room were eight perfect strawberries, hulled so that only the stalks remained: a small card told me they were Oakchurch Farm Strawberries from Jeremy Price, Staunton-on-Wye, Herefordshire. Butter, at dinner and breakfast, is wrapped portions from Netherend farm, and the cutlery is Gainsborough, the china all Wedgwood, and you cannot be more English than that brand, albeit now US-owned. 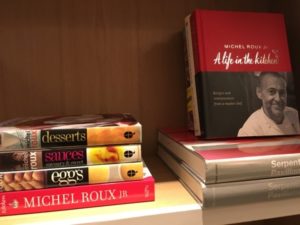 Roux books in the club lounge

This savvy hotel has re-done its club lounge, which was formerly an alcove off the walkway through to the gym elevator. The club lounge is now absolutely splendid, on the ninth floor, big, spacious, lots of different areas, a live chef and charming staff led by a Lebanese manager, Fadi Samhoun. The club’s bookshelves are strong on the Roux family, which is not surprising since Albert and his son Michel Roux, both celebrity chefs with such real talent, oversee all the cuisine here, including in Landau restaurant. They will also oversee the new pub that is being created from a corner spot, once a bank but recently an under-used reception for Chuan Spa. This space is now being reconceptualised by Martin Brudnizki and it will, promises Bob van den Oord, be a really plausible English pub. 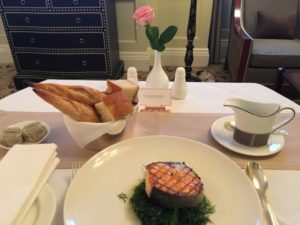 I really enjoyed relaxing in room 919, and after checking out the club lounge and the always- busy Artesian cocktail lounge, it was almost a welcome relief to relax in my room: it could be taxing work in Artesian, voted top bar in London for the last four years. Why taxing? Well how could I choose between its drinks, say a Your Room Or Mine, with Becherovka, 15-year old Glenfiddich and Pineau des Charentes (#feeling naughty) with a perfectly-cooked bit of Scottish salmon with amazing bone marrow sauce, followed by Scottish shortbread studded with chocolate bits, or, alternatively, a Last Wish, namely Amber, Armagnac, Calvados and rye, #feeling anxious). Back up in my luxury hotel’s temporary home, I get ready for bed, already looking forward to return to the Club Lounge in the morning. SEE THE VIDEO BELOW