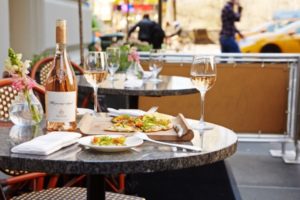 Whispering Angel, and food by The Pierre – a Taj Hotel

The Pierre – a Taj Hotel, New York, is always showing innovation, as of course any luxury hotel should. The hotel’s GM, François-Olivier Luiggi, partnered with ultra-trendy Whispering Angel Rosé to showcase the opening, as of Memorial Day 2017, of the hotel’s street-set eight-table dining terrace. Several events have already taken place, and another is scheduled to coincide with the US Open, on August 30th, 2017.

Whispering Angel was created in 2006 at Château D’Esclans, near Fréjus, southern France, when the vineyard’s owner, Sacha Lichine, and winemaker Patrick Léon decided to produce a richer and more fruit-forward style of rosé. It has become a cult in its native France – see my recent postings on dinners at such gorgeous establishments as Grand-Hôtel du Cap-Ferrat; Hôtel du Cap-Eden-Roc, Antibes, and Résidence de la Pinède, St-Tropez.

In the USA, thanks to importer Shaw Ross and its National Wine Director Paul Chevalier, Whispering Angel is also a must-drink, and now The Pierre – a Taj Hotel is the must-place to try it, outside, on East 61st Street just east of Fifth Avenue.