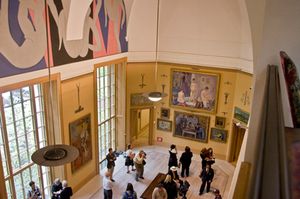 The late Albert Barnes should be beatified for what he has done for Philadelphia, and for art-lovers around the world – and if you stay in the city’s doyenne in the luxury hotel sector, Four Seasons Hotel Philadelphia you can appreciate Dr Barnes’ legacy to the utmost. The gal was blown away. Here was a poor, working-class boy, born in this city in 1872. A skilled chemist and pharmaceutical manufacturer, his Argyrol antiseptic silver compound prevented eye infections in babies, and by the time of his death in 1951 he was extremely rich. He had also amassed a unique collection of post-impressionist and early modern art.  Think Cézanne, van Gogh, Matisse, Modigliani, Picasso, Renoir, Rousseau… 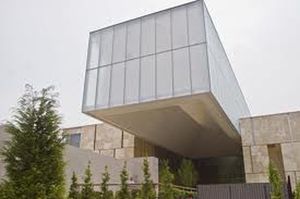 They are all here, now, hundreds of them, set in home-like rooms in the stunning modern two-floor building that is The Barnes Foundation (closed Tuesdays, all day, but ideally try to be there for the regular Friday evening music and other entertainment events). Each room of the Foundation is arranged as a room in Dr Barnes’ home.  He deliberately displayed his art close together, set vertically as well as side by side, often linking such themes as nudes. In among the art are historic metal hinges and locks, set on the wall. At ground level there are some of his own antique furniture items.  The floors are light wood, with a darker wood band set in two feet from the perimeter of each room to stop visitors getting too close to the treasures. 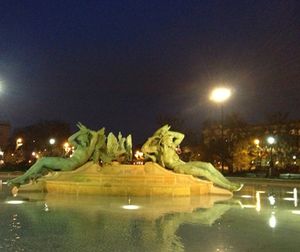 Stay at Four Seasons and you are so near the Barnes Foundation, a couple of hop, skip and jumps away.  The first of these takes you to the Swann Memorial Fountain in the middle of Logan Circle. This is named for Dr Wilson Cary Swann, founder of the Philadelphia Fountain Society (well, surely every worthy city has a fountain society, right?). The main architect, Wilson Eyre, called on a local sculptor, Alexander Stirling Calder 1870-1945, who had also done the figure of George Washington on the Washington Square Arch, New York, and the Leif Eriksson Memorial in Reykjavik: Calder’s father, Alexander Milne Calder, did the figure of William Penn atop Philadelphia’s City Hall, while Calder’s son, Alexander the mobile-maker, did the Ghosts mobile at the Philadelphia Museum of Art. The three works are often called, not surprisingly, The Father, The Son and the Holy Ghost…  by day the fountain’s waters gush but actually I like it dry, by night. 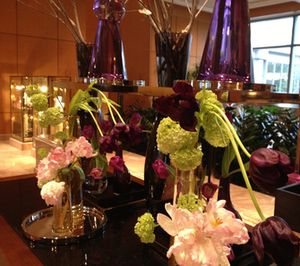 There is another memorable statue in front of the hotel, a lifesize of Tadeusz Kosciuszko, 1746-1817. A Polish soldier trained as an engineer in France, he was actively involved in the War of Independence, became a Colonel in the American Army and accompanied George Washington on his triumphant return to New York on November 25th, 1783.  Gosh this area is so full of history – as is the ageless Four Seasons Hotel, 30 years this year and eternally fun (flower arrangements make statements, where else does a breakfast smoothie include Amish honey, and for another three dollars you get additional protein to make solid food almost unnecessary?). 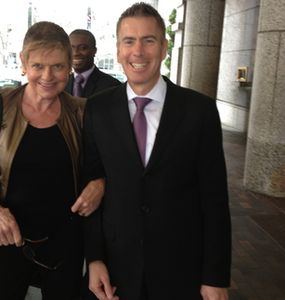 Fountain Restaurant, named because it looks out at the Swann Memorial Fountain, is where the city’s movers and shakers breakfast (smoothies, perhaps?), lunch and dine (say Nori-wrapped ahi tuna tempura to start?).  Brent Martin, boss of this 365-room hotel – gosh, one for each day of the year – dines off solid-meat protein as he describes his daily 90-minute Bikram  hothouse yoga that he begins at five each morning.  After that, no smoothie for this fit guy, merely a bowl of granola.  But he is such a gentleman, and so thoughtful, that he insists on sending you off with exact driving instructions, given personally. 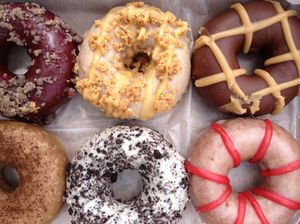 One of his lovely team members has put water and a sandwich and fruit in the car (yes, you are reminded again that this is indeed a true luxury hotel). And, showing his sense of fun, Brent Martin has also bought a box of doughnuts (sorry, donuts). And these are not any-old donuts, they are Federal Donuts.  Can YOU identify which is double chocolate, which is Turkish coffee, which is raspberry lemonade, which is milk chocolate with peanut butter, which is French toast and which is cherry almond?