This was a first. The gal flew into Tokyo’s Narita airport to find her Blackberry not working – foreign servers are ‘blocked’ by Japan’s DOCOMO. She also discovered her city map was 1995-vintage and she had only a vague idea of the whereabouts of Mandarin Oriental Tokyo and, phone-less, she could not call.

But, miraculously, the Airport Express bus has pay-for WiFi aboard, so she sent a message to the hotel and, here is the miracle, there was hotel GM Christian Hassing, no less, personally waiting for her at Tokyo Station with his personal Mercedes…

Then there was to be a second ‘first’, the best sushi experience since breakfast in a Tsukiji fish-market bar a few years ago, and that was rough and ready and pre-dawn, whereas this was the height of civilization, 38 floors up on the main floor of the stunning super-luxury Mandarin Oriental Tokyo.

Christian Hassing found that 68% of all foreign-guest enquiries to his superb concierge team were about where to go out and eat, and sushi please.  So he took off one end of his gym, which Japanese do not use much anyway, and created an eight-seat sushi restaurant, Sora.

Yes, eight seats, this is exclusive. The end wall is all glass, with stunning night-time views over Tokyo. Dark grey onyx walls are reminders of Hanchiku roof tiles.

The room is dominated by a nearly-L-shaped counter of pale cypress said to be 350 years old.  Two high seats are set on the short arm of the L (these diners have their backs to the window), and six matching seats go along the long arm.

Choose your own sake glass, or cup

Each place is set with a grey mat on which are cutlery, chopsticks on a black stone, and  a white parchment box, carefully folded and held with a long cord – open this up, and you find your crisp white napkin.

There is no menu. Behind the counter are two young guys in flat brown forage caps and brown chefs’ gear, and they chat and talk to you about the dishes and what they are doing.

The whole thing is nonstop fascination.  Take the wasabe. Mr Brilliance, the artist who looks young but has years’ of skill behind him, picks up an inch-wide stem and grates it into a paste on the rough sharkskin pad that is permanently glued to a pale wood ‘paddle’ the size of a table-tennis bat. 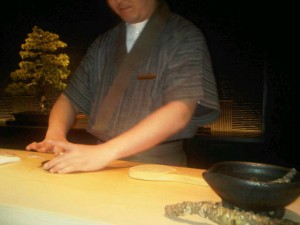 Mr Brilliance, the sushi artist (a bonsai tree behind)

Take the fish.  Mr Brilliance works at an empty table top, but below are cupboards from which he brings out, when required, perfect pieces of fish that are at the exact temperature for eating now, immediately and do not wait.

Take’em out of the icebox for enough thawing time is obviously an early lesson in today’s perfect sushi.  (In the past it was different,  as the earliest nare-zushi was a means of eating fish that had been stored in fermented rice.)

Before we start what is to be luxury dining at its very best, the female sommelier, in pale green kimono, asks sake? wine?  We go for sake, and are presented with an array of drinking vessels.  The glasses are preferred for cold sake, the china and metal cups for hot sake.

We ask her advice, and she suggests two sakes.  First we have Nabeshima Arabashiri 2012 from Fukuchio-shuzo.  It was described as fresh and fruity when it somehow won, as if before birth, first prize in the sake section at the 2011 International Wine Challenge.

Her follow-up choice, from the north, was a dry and clear Hokusetsu Jyunmai 2011 from Hokusetsu-shuzo.  In both cases she poured sake from a wine-shaped bottle into an exquisite china jug and from this she topped up our miniature glasses.

For nearly three hours, the two-man show went on (Mr Brilliance looked after us, and the couple sitting with their backs to the window – his near-clone looked after the four diners furthest from the window).

Behind them, a bonsai tree was perfectly illuminated from above.  Every time Mr Brilliance used his two-foot main knife, or another implement, he then carefully wiped it before putting it back out of sight.

We started with amuse, black bowls eating holding two thumbnail-sized cubes of boiled radish topped with a brown paste of miso and yuzu, a citrus that looks like a wizened grapefruit and is thought to be a hybrid of sour mandarin and Ichang papeda.

Then we went to the meal proper.  Mr Brilliance put in front of us ceramic serving plates with mounds of fresh-sliced ginger, and, as we proceeded through what were to be the next eight courses, every time I had finished one he leaned over to wipe the dish with a white towel.

The idea is to start simply, and build up in flavour.  He cut the required fish, hand-formed it around a small amount of sticky rice, served The Man’s resulting sushi as one mouthful, cut the gal’s into two.

First came garngochi whitefish, followed at appropriate intervals by swordfish, then mackerel, then snapper flavoured with vinegar and salt, then eel, then ark-shell. It seemed like, indeed it was, halfway time, and our tastebuds were heightened by two little half-bites of dried swordfish skin. 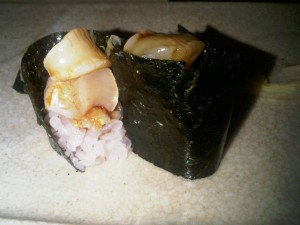 We had tuna, carved with a delicacy off blocks of fish that looked as impressive as the wagyu displays in Wolfgang Puck’s CUT restaurants – there was standard tuna, and then the deliciously-fatty tuna belly.

Back to the sushi stream, with first aoyagi, Japanese orange clam, atop rice and the whole wrapped in seaweed, and next uni, sea urchin wrapped in seaweed.   And, finally, a bowl of miso soup… After that, I slept like a log and dreamed like Richard Branson of not only taking over the world but outer space at the same time.