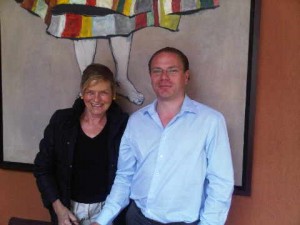 Floris Boyen, in front of a painting by Alejandro Jaime, Hotel Rio Sagrado

Floris Boyen is explaining how is he about to cook dried cod, the real Portuguese way.  His mother-in-law arrived today – here in Peru’s Sacred Valley – bringing supplies and Boyen, who learned his culinary skills first in his grandmother’s kitchen back in Belgium, is going to show off.

Meanwhile, he is busy showing off his current professional ‘baby’, the amazing Hotel Rio Sagrado.  The gal had no idea what to expect.  He performed his usual GM welcome, how lovely of you to come, in front of a painting by top Peruvian artist Alejandro Jaime.  He offers a Muña drink, local mint with a hint of orange, to help fight altitude challenges. 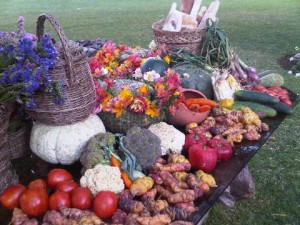 A display of dried local fruits and vegetables is set in the peaceful gardens...

This is the ideal way to get to Machu Picchu. Here you are at about 9,186 feet above sea level, and you can get used to the altitude, and its thin air, before going on to ‘all that climbing’ that you know will be needed at Machu Picchu.  So, you arrive.

You fly into Cusco and Orient-Express, which has organised it all brilliantly, drives you the 80-minute route to the Sacred Valley.  Where else does a luxury hotel’s main drive lead off a working railway line (the Kia crosses it, you hope no train is coming).

Into the four-acre complex, you can head down past some of the 23 rooms to perfect lawn that stretches down to the Urubamba river.  The grass is manicured by the resident alpaca and llama, both of which wear red ribbons.

To one side, a neighbour is ploughing his half acre of land, with a couple of oxen. Tables near the river are set up for casual lunches.  Instead of a standard flower display there is an arrangement of dried local fruits and vegetables. 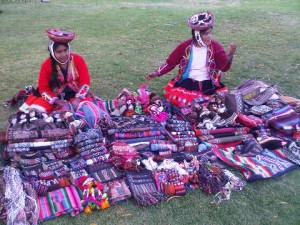 .. nearby two local ladies (one the chef's wife) knit, sew and display their wares

All day long, two local ladies sit knitting and stitching and offering their wares for sale.  One of the beauties is, apparently, the wife of the chef (bet she is not going to have Portuguese cod for dinner tonight).

43 of the 45 lovely people who work here are Peruvian – the exceptions being Boyen and his wife, who, as experience manager, suggests ideas for river-rafting, climbing the mountain opposite, or even taking a mountain bike ride.

And with yoga, and touring the hotel’s own vegetable gardens, and using the spa, there are luxury lifestyle experiences aplenty here. 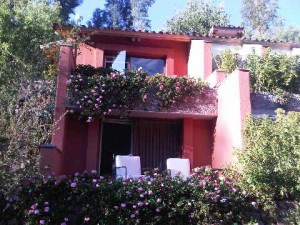 Look back up at one of the hotel's two-floor blocks

From the grounds, look up at the hotel.  It was built in 2009 by Rafael Maurique but Orient-Express came in very quickly and gave it the typical OEH treatment: although it is not exactly like other members of the group, say the splendid city-centre hotels such as Grand Hotel Europe in St Petersburg, The Ritz in Madrid and even Hotel Miraflores in Lima, it has recognisable Orient-Express style.

Outside, the rooms are terracotta-harled, with terracotta tiled roofs.  Most are single floor, just some are in two-floor blocks. 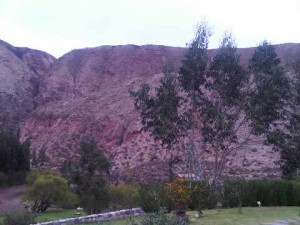 View out from room 10, down the long lawns, across the river to barren, characterful mountains

Look back out from room 10, which is 590 sq feet total, bedroom and adjacent bathroom.  You have a similar feeling of space as at Amangiri in Utah but there you look out at barren dessert, not a bit of greenery in sight.

Here it is all green, close to hand, but across the river – said to be shaped like the Milky Way – the mountains rise steeply.  I tell Floris, who is already asking me to come back, that next visit I demand a hike to the top, with suitable escort.  It will take two hours, apparently. 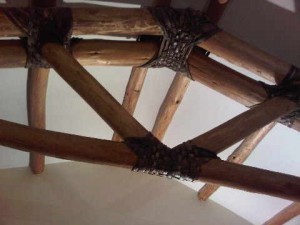 The bedroom ceiling beams are held by leather straps, attached when wet so they tighten as they dry

Room 10 is at the end, closest to the arrivals place. The cathedral-type ceiling beams are held in place in traditional style, with leather straps that were bound in place wet – they contract when dry. Mats on tables, and throws at the end of the two double beds, are brightly-coloured local textiles.

There is excellent WiFi (free), and the bathroom has a two-person shower with lots of really hot water.  Come back after dinner and a hot water bottle, in a turtle-shaped cover, is on the bed. 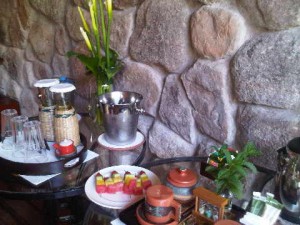 Fruit skewers are set out by the spa's (very hot) hot tub: note Inca-type stones, behind

The spa has an amazingly-hot hot tub, not quite Japanese ryokan temperature but still delicious to any aches and pains. Have a long-long soak, and then nip outside into the cold-cold tub for a final tingling of the skin.  By the two tubs, drinks and fruit skewers are set out.

Before dinner, I put tubes of makeup in my minibar to see if chilling them prevents the contents flooding out, when taking the tops off (this is an altitude problem, as any traveller to mountains knows). 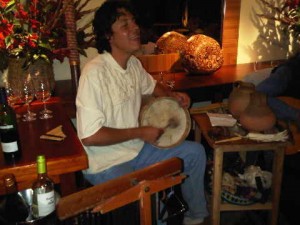 The lead musician who entertains during dinner...

Tonight at El Huerto restaurant here is a barbecue, which is set up next to a flaming fire ball which apparently burns every night, outside the restaurant.

There is plenty of wood around, and stacks of logs are placed handy for the two fires.   Chefs in crisp whites man the barbecue.   We have a tasting of Piscos, the colourless alcohol developed by Spanish settlers in the 16th century. 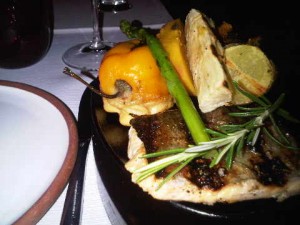 .. grilled trout comes sizzling on a skillet, with local vegetables

Fire-water is not the word for this, neat Pisco, and I prefer to sniff rather than drink the straight stuff, and go for a Pisco Sour instead. A three-piece group plays emotional, senses-tingling Peruvian music.

Two older guys have a selection of guitars.  The leader of the band, whose day-job is providing fruits and vegetables to this and other hotels around, decides the music, and the improvisation in between.  He plays a variety of drums, Pan-type pipes and a long tube that looks rather like a small didgeridoo. 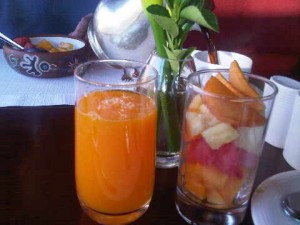 I start with a ‘Kilometre-Zero’ salad, made of ingredients that, as its name implies, come from very close by.  Next comes choose barbecued trout, fresh from Wayllamba.  It comes sizzling on a skillet that also holds roasted local vegetables.

The sacred valley has always been renowned for its fertility.  In the morning I run back up to the rail line, and along the main road, Carreterra Urubamba-Ollantaytambo.  A couple of guys ploughing, with their oxen, wave.

I wish them the best of the day and ask how they are, ‘working’ comes the reply, in Spanish.  I run on past a field of cabbages, the heads packed together as tight as sardines in a can.   Back home, I take a quick hot shower and yippee, ‘chilling’ makeup tubes works. The contents come out slowly, as required.

I head for breakfast, for fresh-squeezed papaya juice and goodness-packed brown bread.  Orient-Express apparently has a French baker doing its Peru circuit (five hotels in all, plus the famous Hiram Bingham train): hope I get to see him. This has to be one of the ten best hotels to make a traveller feel good, at least relaxed.