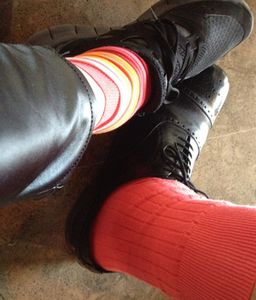 There are few luxury hotels worth their salt that do not offer weekend brunch, in one form or another and with or without the salt, and the gal took the opportunity of being in UAE to head back for the splendid array at Fairmont Abu Dhabi. She put on her best new striped socks, only to find that Nils Axing, who runs the hotel, also had orange socks, and his deputy had an orange tie. Where did this amalgam of breakfast and lunch come from? The Smithsonian Magazine suggests English hunt breakfasts, with lavish courses of meats, eggs, fruit and more. Others suggest breaking Catholic fasts. 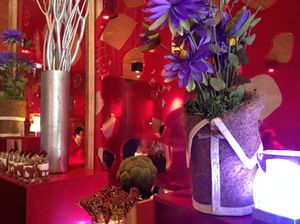 A Stanford University professor, Carl Degler, wrote in the Chicago Tribune in 1980 that brunch was the only meal a family might eat together (during and after WWII many more women entered the workforce). In some areas, including Abu Dhabi, servants are off for the day and yet working household members are home. What is the answer? Head out to eat. They certainly do here, where Friday is the weekly day of rest that most of the world celebrates on Sunday. A busy brunch here may see 800 takers, nearly all expats and many of them regulars. It costs US$123 a head, with a full bar and unlimited Laurent-Perrier included, as are taxes and service. Compared with the brunch at Costa Smeralda, which cost US$170 back in 2010, excluding taxes, service and coffee ($8) and any alcohol extra, this seems like a bargain. 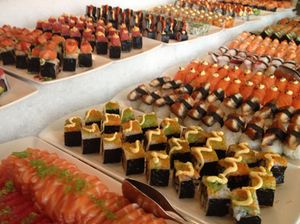 Not surprisingly some stay for a very l-o-n-g time. The room is cleverly divided, with scarlet glass screens. Like any buffet, it is a good thing to get there early. Half an hour after I photographed this sushi military formation it looked more like a rout, though the servers were rushing around, replenishing as fast as they could. There was Chinese, there was Indian, there was some of the local mezze. There was also an okonomiyaki station, where a chef made tiny pancakes and you chose the ingredients. 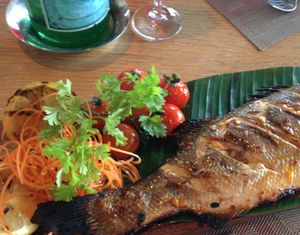 There are also several live cooking stations, and an entire rib of perfectly cooked roast beef, with mammoth individual Yorkshire pudding popovers. Nils Axing asked for a seabass, and got a beautiful specimen. He says that, especially for a Swede who loves the sun, the UAE is the perfect place to work (although the family does have an unusual number of private visitors, fleeing Stockholm’s winter). No-one, it seems, has any negatives about working in UAE these days. Recruitment is a cinch as everyone wants to try living, and working, here. 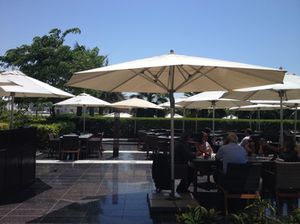 Outside, it is just too hot

Already, mid-May, it is getting too hot to sit outside, so the hotel is putting up two gigantic outdoor tents, both air-conditioned. One, on the sandy beach, will seat 850. When some of the more veteran expats living in UAE first arrived, they could almost count the number of blades of grass they saw each day. Now gardens are as lush and well-tended as any at Chelsea Flower Show, which this year runs May 20-24, 2014 (luxury travel tip, try not to be in London at that time, unless you have to). 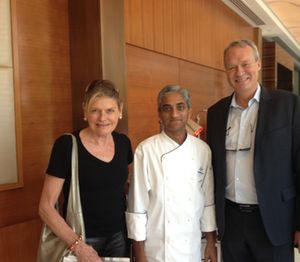 Nils Axing and a chef

Many were still arriving as we left this luxury hotel’s stunning Friday brunch, and of course afternoon tea had already started in another part of the hotel. But with afternoon tea running at The Ritz in London from 11.30 a.m. who knows what time it is…