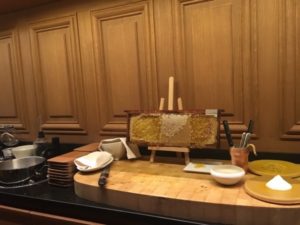 There are many who do not want to breakfast in the space where they dined a few hours before, but one luxury hotel shows it can offer two individual, but complementary, experiences. At 6.59 a.m. the gal was outside the door of Restaurant Alain Ducasse at Hôtel Plaza Athenée, above. One minute later, on the precise hour, that door opened. Everything inside was ready, with supplies either in the kitchen, hidden out of sight at the far end of the restaurant, or in a fascinating room, shielded by one-way glass, that runs the whole length of the restaurant (I was shown this ‘museum’, which as well as storing honeycomb and serving plates has, above, priceless Ducasse collectibles, including a set of Baccarat champagne coupes, the box dated 1944, the glasses never used). Last night the restaurant’s wood tables were uncovered. Now they have crisp white tablecloths, matched by large linen napkins. Each place has white Pillivuyt china. By each table is a white, floor-standing handbag holder, made by 3-D printing. 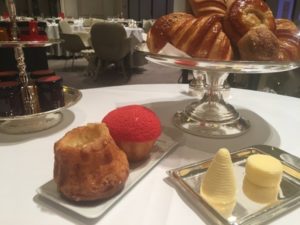 Last night there were several female servers, in chic cream above-knee dresses, dark blazers and scarves tied at the neck. Now the all-male crew wears dark grey suits. There is no buffet. Someone brings a menu, and a colleague offers a silver tray with Bordier butters, both salted and unsalted (last night’s butter portions, on paddles, had been scooped out of a five-kilo wood tub of Bordier butter). Now, also, a silver stand bears at least a dozen mini baguettes and viennoise – a charming water-colour leaflet shows what is what, with pictures by Florine Asch. The leaflet credits both the top pastry chef, Angelo Musa MOF, and the head baker, Guillaume Cabrol. It also identifies the daily specials, which happen today to be a raspberry-topped brioche the size of a tennis ball and, of equal proportions, an Alsatian kouglof, a bell-shaped brioche flavoured with orange blossom. 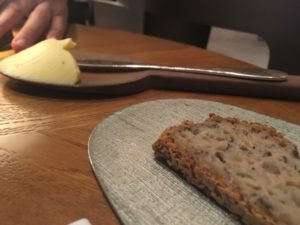 There are eggs of the day, today’s being a fried omelette with leeks, and teriyaki eel. The set meals are basic continental, at €46; American, €60, Plaza special (at €90, this adds to the American set Iberian Bellota-Bellota ham from Guijuelo, and organic Norwegian salmon). There is also a healthy alternative, with zero-fat Florine Asch yoghurt and muesli, and a cold-pressed drink that is simultaneously anti-oxidant, dynamic and alkaline. My Bordier yoghurt is brought, on a small dish, with spoon – the server removes the jar’s top. Another server brings a big pot of coffee, with a paper cover over its handle to prevent any burns. 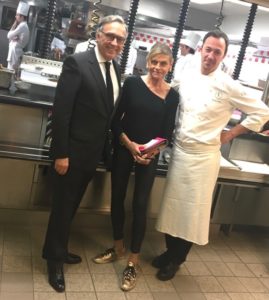 My eggs are brought (that server points out which of the silver mills, by Peugeot, is salt, and which is pepper). The order for brown toast results in three big bits of rustic Poilâne bread, each held separately in a fold in a folded linen napkin. Taped classical music is just loud enough. Lighting is strong enough to read my choice of the many French and international newspapers laid out near the door. The reason for this detailed description of such a perfect breakfast is that although I do prefer buffets – and I forever hanker after those of Cala di Volpe, La Mamounia and many of the great luxury hotels around the world, those properties that do only offer à la carte should look at what Hôtel Plaza Athenée Paris does.