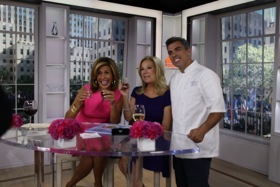 This is Alejandro Rojas, Executive Chef of Rosewood Mayakoba, on the set of NBC’s Today show, September 15th, 2014 – and since he happened, of course, to be in New York, he popped in the following day, which happened, of course, to be Mexico’s National Day, to serve guacamole and tortillas to all the employees at the headquarters of the Hearst Corporation. Rosewood Mayakoba, the most sophisticated luxury hotel of the Mayakoba trio on Riviera Maya, sure has a marketing minded culinarian, who just happens, by the way, to be married to Liza Orozco in the main Mayakoba marketing office. Fortunately Alejandro Rojas was back at the stove when the gal came to dine, at Casa del Lago, and yes, his guacamole was totally sensational. 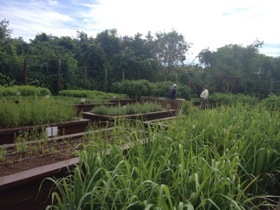 Guacamole in much of the world is a green purée, or what airline security would call a paste and no, you cannot take more than 100ml through, sorry. Mexican guacamole is barely-mashed lumps of avocado, and you choose from a variety of herbs and sauces. On September 24th, 2014, Rosewood Mayakoba officially unveiled its Mayan kitchen and garden, producing the herbs that guest can pick, to have cooked, perhaps, over a zapote wood grill. The garden, conceived by then-GM Graeme Davis, has a working kitchen, next to a ceiba tree with spikes coming out of its trunk – so the whole caboosh is called La Ceiba Mayan Kitchen and Garden. 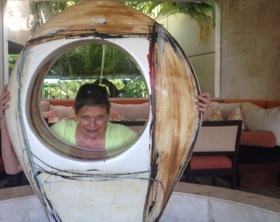 Statue at the entrance to Casa del Lago

There is a big fire pit in the centre of the garden, and beside it a deliberately-rusted Jose Manuel Martinez sculpture, of rods about 12 feet high. I love another sculpture, by I know not whom, at the entrance to Casa del Lago (which, by the way, has the most amazing breakfast buffet, with every berry, and cold cut, and cheese imaginable, and a bone-strengthening smoothie to order, with added anti-oxidant chia seeds – sit out on the balcony, looking down at one of the pools). Rosewood Mayakoba has lots of water. Some villas are a mile away, through the forest, right on the beach. Others, like mine (206) jut out over the inland waterways that wind through the mangrove. Imagine a sandstone and glass structure, with wood deck cantilevered over such a waterway. 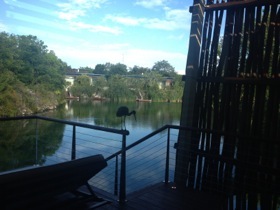 A companion on my terrace

Inside, lines are straight, at right angles to each other. Starting at the back of the villa, I have a completely private sandstone walled garden with outdoor shower leads you forward, through a glass-walled indoor shower, to the bathroom. Come on past the walk-in closet to the bedroom, and on through to the living room, with all-wall windows opening to the deck, with a plunge pool, and wood steps taking you down to your landing stage (a regular water shuttle runs between all three Mayakoba hotels, and they also offer you water transport when you arrive, for the first time, at this luxury hotel. I am just wondering if this heron is waiting for that shuttle? Later, I look at his photo in the latest edition of James Batt’s must-buy guide to the Birds Of Mayakoba (his images are sensational).