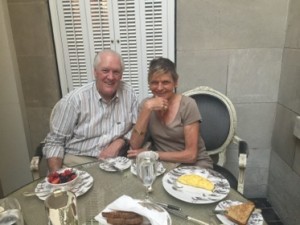 Philip Wood, dressed for his surroundings

Even if it has history and beauty and all the rest a lodging place, especially a luxury hotel, is all about its people, says the gal. Look at the people at one hotel, The Jefferson Washington DC. It was built by architect Jules Henri de Sibour in 1923 as private apartments for local society, and during World War II billeted parts of the British Army. It was a hotel from 1955 on, closed 2007 for renovations and re-opened in 2009 under one of the great-and-good hoteliers, Philip Wood. He is the conductor who directs his 157-strong team more as a ballet master than the manager of Chelsea (particularly when that club’s Jose Mourinho lost his temper with his female team doctor). No, maestro Wood manages everything, serenely. After a ghastly day of flying yesterday, here he is, calm and cool at breakfast – note the gorgeous patterned china. 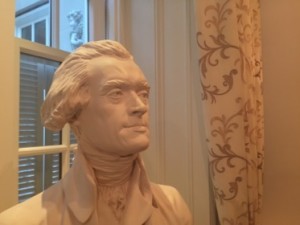 He tells me about a connection, thanks to the British Embassy, with the only female cutter on London’s Savile Row, Kathryn Sargent, who will be flying over to the hotel to talk to clients who want bespoke talioring, October 19-20, 2015. She is also going to make a formal coat, with the hotel‘s logo on its pocket, for the hotel dog, Monty, short for Monticello, a beagle who came from Partners for Animal Welfare. Monty has his own business cards, and there will be a pocket for them on his jacket sleeve. Thomas Jefferson, 1743-1826, who designed and lived at the original Monticello, would approve – yes, he was a beagle follower too (his were called His and Hers). Of course among all the Jefferson memorabilia here at the hotel there is a bust of the great man. 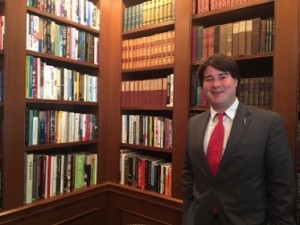 Andy Marshall in a corner of the library

Want more history? There is sensibly someone to help you, every Saturday morning from nine to one. Today it is Andy Marshall, taking a break from his day job as custodian at Mount Vernon. His title here at The Jefferson is historian but in fact he wants to help out of town visitors get to know more about the city and its sights. What would he recommend for a first-timer? A three-hour Segway tour, with a Smithsonian-accredited tour guide. He is sitting in the hotel’s library, which not only has books about Jefferson but also signed copies of books by some of the many authors who have stayed here, like David Balducci, Leonard Bernstein; Niall Ferguson, Diane Keaton, Larry King, Martha Stewart, Charlie Trotter and Alice Waters. Is there also a signed Barack Obama book? He often holds private dinners in the hotel’s 14-seat wine cellar room. 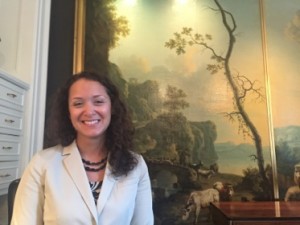 This is a blend of history and people of today, this luxury hotel. I am lucky enough to meet so many of them, a succession of concierges, and Aly the front office director who has now also taken responsibility for housekeeping. I think again how much nicer it is for those working reception if they have fascinating surroundings. At Hotel interContinental Chicago they have real-time Chicago scenery displayed behind them. At Conrad Miami they have changing LED patterns in front of them. At Park Hyatt Chennai they stand in front of an indescribable silk hanging with holes in it. Here Aly and her colleagues are backed up by a pleasant rural scene. It must be particularly soothing in a freezing Washington DC winter.