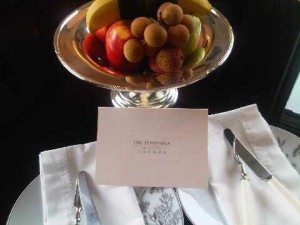 Welcome to The Peninsula Shanghai

Two global connoisseurs, separately, said in the last week that The Peninsula Shanghai is the best hotel in China and one of the best hotels in the world.  With that kind of accolade, what makes it so special?  It was a challenge the gal had to accept, to find out for herself.

You arrive, and the ballet starts, a kind of pas de deux where the ballet master, in this case Ricci from front desk, whisks you straight past front desk and the concierge and giant flower displays and art and into an old-fashioned elevator (with over-door arrows, as at The Adlon in Berlin) and up to your floor and your room.

Anything else he can do for me? Boarding pass for tomorrow? Have it emailed to me, he says (handing over business card). Four minutes after I check in on line, the doorbell rings, and Ricci personally hands me the printed-out boarding pass.  There is a simple card, hand-written, by the fruit bowl. 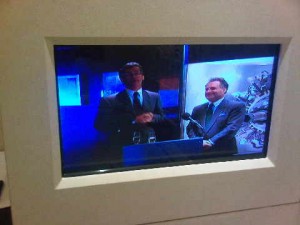 Dick Smith, left, and the Hon Sir Michael Kadoorie at the end of the bathtub

The room, 610, has thick blue carpet, rounded-corner pale cream walls and moulded ceilings. The versatile Pierre Yves Rochon has blended the 1930s of old Shanghai into a 2009-vintage building. There are heavy, too-big-to-steal books, on Chanel and Ralph Lauren (there is a massive Chanel shop downstairs, designed by black-leather macho guy Peter Marino).

There are Peninsula signatures, a cat-flap to allow newspapers and shoes to be put in without disturbance, and a little wall-set nail varnish dryer, to excite the pink-taloned ladies. There is free VOIP worldwide, and of course free internet. Plunge into the bathtub, using the bathsalts provided, and use the so-easy wallset television controls.

Channel two shows the history of The Peninsula group: here is The Hon Sir Michael Kadoorie with Dick Smith, author of Flying Solo, at the 1994 opening of the helicopter landing pad and arrivals lounge atop the tower of The Peninsula Hong Kong. History while you soak. 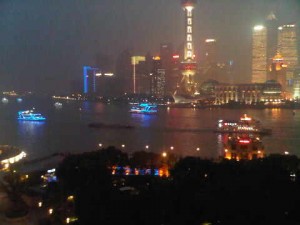 View across to Pudong

The views here, from No 32 The Bund, are different.  You can look straight across the Huangpu River to Pudong, or left, down to the former British Consulate and its garden, or right, along the curve of The Bund. Peninsula held a party on its 14th floor rooftop terrace to launch the International Luxury Travel Market the other day.

Today, it hosts an intimate dinner for three in the Metropolitan Suite. The champagne is Peninsula’s own (by Deutz, available in all the hotels), and the 2008 Pauillac is also a Peninsula (by Domaines Barons de Rothschild Lafite but only available in the China hotels).  All Peninsula wines are chosen by the company’s F&B steering committee.   A worried English chef called Richard cannot believe that his meal will be satisfactory – it is more than that, it is perfect for a last supper. 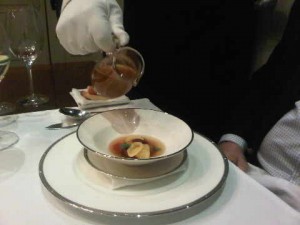 Tomato and gin consomme is elegantly poured into the soup bowl

And last supper it is, because tomorrow it is time to leave Shanghai for the rest of the world.  Richard has produced a starter of cured salmon with asparagus, and horseradish, beetroot and caviar.

Next comes a tomato and gin consommé, poured into bowls that already hold ricotta swirls and tiny bits of grapefruit with, on the side, a slice of thinnest dry toast with Jabugo ham rolled on top.

The main course is seabass on fennel, with a green curry dribble.  Dessert is a platter of chestnut cream and cherry jelly, a dollop of whisky icecream and a linen-wrapped waffle (I bet they do not do that in Stratford, Richard). 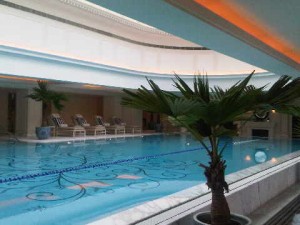 The indoor pool has a conservatory roof and a side terrace

The Peninsula’s pools are another of its signatures.  The Beverly Hills pool is outside, though there are working fires nearby and Bordeaux heaters for warmth if you insist on having breakfast outside, poolside. Both Chicago and New York both have rooftop pools, with magnificent views over the locales.

Hong Kong’s is indoors, with a terrace for sunning yourself as you gaze across to Central – and as you swim, plausible but faux classical columns supposedly holding the ceiling up give a sense of timelessness.

Here in Shanghai the 80-foot pool is gorgeous, with swirls on its base, and an oval conservatory roof. The adjacent hot tub is hot, with a vitality bed, and doors open to a terrace.  Miraculously, the pool surround is non-slip, apparently because the marble is non-crystallised. 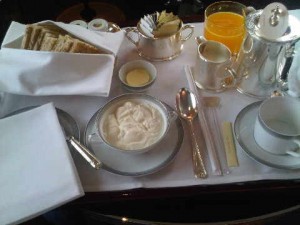 How does what some say is the best hotel in China do room service breakfast?  Only one way to find out, try it.  How does this 235-room luxury hotel do shopping? Sorry, no chance to try Chaumet, Chanel, Prada and colleagues.

No chance this visit to try the two-floor Sir Elly’s or Yi Long Court restaurants, or Salon de Ning nightclub, or to return to the fascinating 1930s Aviation Lounge, with the waterplane flown up the Yangtse by Rosamonde Sun, wife of Dr Sun Yat-Sen… Gm Joseph Chong, interestingly, wanted to fly.  Thank goodness he switched to hotel keeping, or rather employee keeping as he is like a gentle school teacher guiding his 800 students, also known as employees. 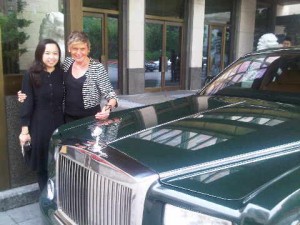 Cecilia Lui is of course there to say goodbye

Downstairs, despite it being early on a holiday morning, Cecilia Lui, one of the main powers metaphorically propping up Joseph Chong, is waiting to say goodbye.  She helps me into the car, another Peninsula signature, a stretched Rolls in Peninsula green, with mustard leather interior.

Of course it comes with its own laptop, and VOIP phone, and the WiFi is perfect, but the 45-minute drive to the airport is not long enough and we were not able to drive past those two enthusiasts who said this is the best hotel, for them, and smile.