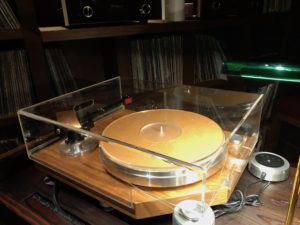 More and more longhaul travellers combine Tokyo and Seoul, apparently (who, you may ask? Well, the number includes the growing volume of adventurous Middle Eastern luxury travellers who like such destinations because of the cold, the shopping, the health and wellness facilities, and the safety). Adding to this list, says the gal, you could of course include the selection of luxury hotels, and the surprisingly fun, and daring, elements they offer. Take Park Hyatt Seoul’s Timber House Music * Bar * Dining. Designed by Super Potato, it has always, since the hotel’s opening in 2005, looked like the inside of a Korean house, lined with timber of course. 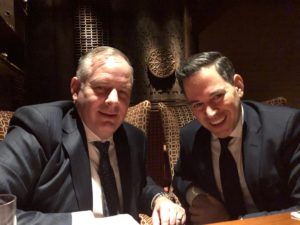 But in November 2017, after a month-long re-do, Timber House emerged with a new, younger, look. Live music has gone, although a grand piano remains just in case anyone wants to tinkle on the keys. Instead, GM Thomas Harlander has cleverly brought in McIntosh MC302 Power Amplifiers and a pair of Pioneer turntables, and a DJ of course, and he is buying his way up to what will eventually be a collection of 5,000 vinyls. Even on a Tuesday night the venue was almost packed (you can reach it from the street, down 32 concrete steps, which makes it seem like a free-standing place). I was with Thomas Harlander, and his colleague Adrian Slater, from Grand Hyatt Seoul, and we all had a jolly good time. 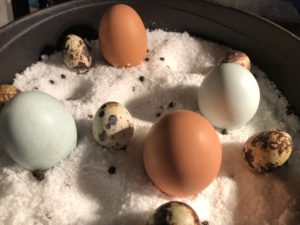 A daring display of breakfast eggs

I loved my sashimi (see above). The food is whatever-you-want. The two guys seemed to like a local stew called tteoik-bbooki, yes really – it is rice and pork skin – so much they ate more than one, but then I did the same with the sashimi. After a 90-minute drive in from the airport, fortunately with excellent WiFi so I was able to write, I was really hungry. This hotel, however, is great for location. It is literally two steps to Samseong metro station and the hotel has a complimentary shuttle to the airport express bus, five minutes’ away: the bus runs every 15 minutes and since it can use dedicated bus lanes it gets to the airport in an hour. 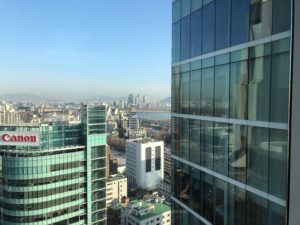 This is one of those Hyatts that require elevators up, to the 24th floor reception, and then down, to your room – I loved suite 2205, with its Aesop toiletries and large wet area (see the view, to the right). In the morning I took an elevator up to level 23, went through the stylish Park Club, with lots of members, and then it was stairs up to the Technogym, next to a 50-ft glass-walled indoor pool. Breakfast was up to the 24th floor, change elevators, down to the second floor Cornerstone. I remembered that Korean breakfasts are some of the most copious, anywhere, from daringly-simple egg displays to such local specialities as abalone porridge, and various kimchi stews with steamed rice – and, for me, the luxury of a hotel that produces really good coffee, and western early-morning necessities. NOW SEE VIDEOS, OF SUITE 2205 AND THEN OF THE TIMBER HOUSE