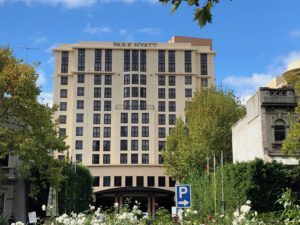 Melbourne’s Park Hyatt has dominated the east end of the main city since the 13-floor building opened in 1999: it is a stone’s throw from the State Parliament, Saint Patrick’s Cathedral and many of the city’s best hospitals. It even has a mothers’ programme with St Vincent’s: insurance pays for new mothers, and their babies, to move into the hotel for two or three nights after giving birth, which frees a hospital bed for the next delivery.  Everyone benefits. New mums have temporary luxury, knowing that their hospital is providing 24/7 midwife coverage. The hotel gets an average ten rooms a night, and the knowledge that these guests may well return for babies’ birthdays and the like. 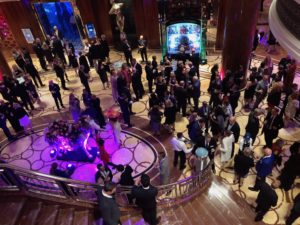 Looking down at the Virtuoso cocktail

This is a hotel, led by GM Robert Dawson, who also heads the whole of Australasia, which understands clever marketing – many guests, for instance, instantly warm to the hotel’s canine ambassador, Mr Walker (seen in the photo, above, with his minder, Hotel Manager Leigh Shepheard who takes Mr W home with him every evening).  During the recent Virtuoso Symposium, Park Hyatt Melbourne was one of two host hotels, which meant the 134 Symposium delegates staying here breakfasted, as I had  during an earlier stay, off the Radii buffet which is personally overseen by the Executive Chef (how many hotels’ top culinarians are regularly checking things at 7 a.m.?). During the Symposium, Park Hyatt hosted the pre-dinner cocktails on the ‘gala night’. 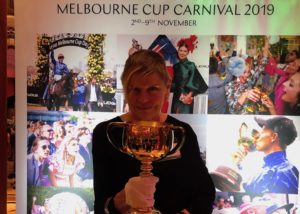 We paraded down from the marbled lobby to the event area. As well as featuring a woman wearing a crinoline skirt frame holding 120 filled Champagne flutes of Australia’s own Chandon bubbly, highlights of this cocktail were two sports trophies.  Yes, the hotel had been loaned, for that one evening, the actual Australian Open tennis cup, a sterling silver beauty made in 1926, and the 18-carat gold Melbourne Cup, pinnacle of the horse-racing world (both were protected by flotillas of cocktail-dressed security, and Seminar attendees donned white cotton gloves to hold a cup, for photographs).  They had even thoughtfully provided a line-up of pink hats, on pink head-only mannequins, for party goers temporarily to don for plausible Melbourne Cup photos. 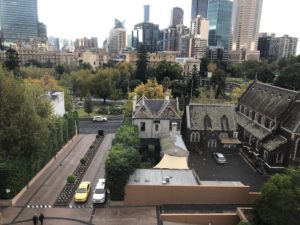 Facing west from a hotel bedroom

I actually came to the Melbourne Cup a few years ago.  I wore a hat by that amazing milliner David Shilling, and my multi-coloured feathered creation got more Channel 9 attention that the corn-sprouting hat atop Lillian Franks, queen of Melbourne’s fashion events (was it because of this that David Shilling was so overcome that he relocated from London to Monte-Carlo?). Melbourne is used to hosting special events, from, say, January’s Australian Open to Formula One to the Melbourne Cup with goodness knows how many other happenings in between. And every year about 45 blushing brides choose this as their wedding party venue (some undoubtedly also stay over as a St Vincent’s new-mum, whether before, or at some point after, the nuptials celebration.  This is, as I know from experience, a luxury hotel where there is always something going on. AND THIS, BELOW, IS ROOM 1045