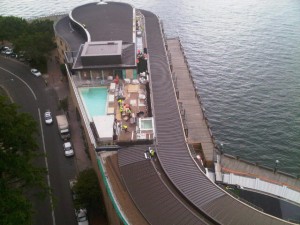 One of the joys for any fit person in Sydney is running, or walking, over the harbour bridge.  And when they started Bridgeclimb about 11 years ago, the gal was one of the first up there.

You need to allow three hours for the whole trip, safety briefing, getting into special togs, being roped to the rest of the party and then slowly making your way up and over the top of the metal structure and back down the other side.  It is well worth it – once.

These days, a gal does not have three hours to spare.  She simply takes the run over the bridge, up the steps from Cumberland Street (five minutes from the Shangri-La) and then 15 minutes across to Kirribilli on the other side – and back again.  There are superb views.  You pass right over Park Hyatt Sydney, of which more anon.

There is always so much to see in the harbour. Looking across to the Opera House there is a criss-crossing of ferries, leaving from Circular Quay for Darling Harbour, Manly, Mosman, Parramatta, Watsons Bay and what have you. 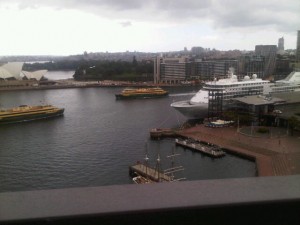 Still on the bridge, looking across to the Opera House, with Silver Shadow to the right

At this time of year there is invariably a cruise ship, in port for about 24 hours and then off again.  It happens, today, to be Silver Shadow, one of the big sisters of the fabulous super-duper Silver Cloud on which lots of us had such a memorable time sailing through the Panama Canal at the beginning of this very month.

Later, washed, dried and tarted up, it was time to walk from Circular Quay along to Campbells Cove.  You pass a masted Tall Ship and look at that criss-cross of ferries. Sydney’s water police were headquartered at Campbells Cove for a century until 1986. 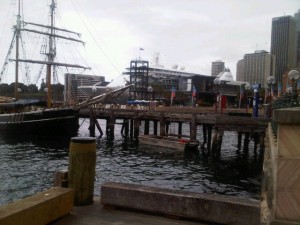 Walking along the boardwalk to Park Hyatt Sydney, past a mass of masts

Four years later the Park Hyatt opened (it had originally been planned as a Regent but that is another story). The S-shaped building follows the curve of Hickson Road as it in turn follows the extreme convex shape of Campbells Cove.  This luxury hotel was originally four floors, with just a mini spa and mini pool on its roof.

Thanks to a multi-million (think many times over) dollar spend by its Japanese owners, Daisho, Park Hyatt Sydney re-opens on February 13th, 2012 after an 11-month re-think.

This is more than a re-do, not quite a total re-build. From the outside, all windows’ balconies now have clear glass rather than metal walls. Inside, thanks to designers BARstudios, public spaces are airy and light, with many walls that are totally Sydney sandstone, from nearby Gosford Quarry, etched with aboriginal-type cartoons by G. W. Bot. 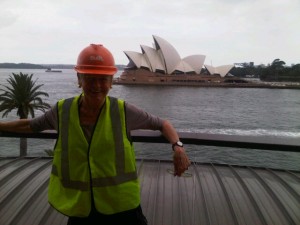 About to inspect the work at Park Hyatt Sydney

There is other art, from sculpture to photographs, by such local talent as Tim Johnson, Australian Photographer of the Year Robert Billington, sculptors Bruce Armstrong and Robert Bridgewater, and print maestro Julia Silvester.

Cleverly, walls between meetings area and The Dining Room – retro name for the restaurant – are one-way glass. Conventioners can see diners but not vice versa.  Four former bedrooms have been converted to a proper gym and and five-room spa (using Natura Bissé products).

The wow of the whole, however, is the newly-added FIFTH floor. The rooftop now has a double-sized pool with three fixed cabanas.  It also has, privately secured from pool activities, three and a half totally gorgeous suites (the largest has a second bedroom that can be sold by itself).

The largest, the Sydney Suite, is 2,500 sq ft with an additional 1,000 sq ft of outside deck that curves around 270 degrees, giving umprecedented views from the Harbour Bridge round past the Opera House (so ‘close’ you feel you can touch it) to Circular Quay and the CBD, Sydney’s Central Business District.

The wealthy world and his wife will bag one of these suites, if not all of them for extended family and security and the like. Cannot wait to return, but meanwhile it was time for lunch.

Since the Dining Room is still a criss-cross of yellow-jacketed workers drilling and polishing and measuring in a theatre of protective plastic, we walked back to Central Quay to the Customs House. 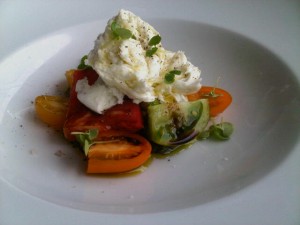 This is a destination in its own right. The ground floor has large glass panel (about 20 feet long) looking down to a model of Sydney, and there is a library with free newspapers of the world, and computers.

Rise to the fifth floor roof and you emerge at Café Sydney, run by Martin Allies’ Café Deco group out of Hong Kong.  Definitely book ahead. Great views across to the Opera House, great food, ‘great’ (that is to say HIGH) prices.

The gal went back a couple of days later and her bill for a pretty small tomato and mozzarella starter, one piece of spinach naan and her share of a litre bottle of mineral water was $44. Everyone in Australia SHOULD be size-zero slim….