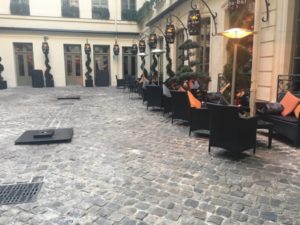 There is usually something special going on at luxury hotels so it is a bit of a surprise when the gal turns up at the fun-luxury Buddha-Bar Hotel Paris to discover an empty courtyard. The entrance, off rue d’Anjou, just behind M. Hollande’s temporary home (a.k.a. the Elysée Palace), is still magical, going in under five rows of 15 double-height Italian blown-glass red lanterns, as above. Always before, the courtyard has been turned into a summer bar, or a Japanese winter garden with sheepskin-covered stools and Bordeaux burners to keep you warm as you try shabu-shabu. Now the courtyard is, temporarily – empty. 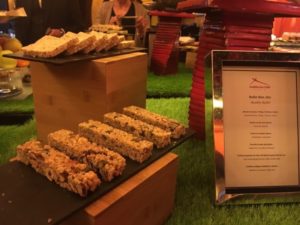 Never mind, I moved inside with the hotel’s live-wire GM, Gérald Van Reck, a Belgian who learned his pride of service from his grandmother. This guy has made nine trips to the US in the last year as he now handles sales and marketing for the 56-room hotel as well as making sure that it runs perfectly, even when he is not here. He showed me the upgraded breakfast buffet, which includes six types of milk, including donkey milk, which is only one percent fat versus the typical 3.6% fat in cows’ milk. The hotel works with nutritionalist Catherine Malpas and the just-introduced healthy section also includes home made granola bars, and slices of green tea-infused brioche. Aha, what is healthy about brioche? 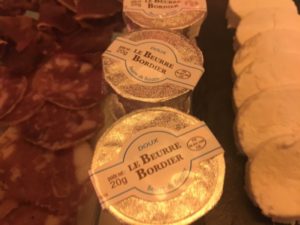 And what is an array of mustards doing on a breakfast buffet? Actually I have given up being surprised by anyone’s breakfast habits – the most unusual remains the Russian oligarch who breakfasted every day in Belmond Grand Hotel Europe in St Petersburg, starting with a half-pint glass of beetroot juice, lettuce, yogurt and seven, yes seven, cross cuts of water melon (presumably he still has the same up in heaven, or wherever it is Russian oligarchs go when this pass through St Peter’s pearly gates). Hoteliers, by the way, are notoriously bad breakfast eaters, as I found again in Berlin last week, and today Gérald Van Reck admitted he never eats breakfast. 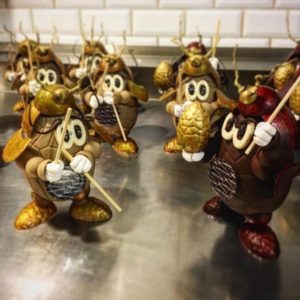 No problem, many others do and by 8.30 a.m. the breakfast room at this makes you-smile luxury hotel was doing fine, especially with the baseball cap wearing crowd (fortunately worn right way round). I left more than ever convinced that there is increasingly a role for this kind of quirky, full of touch points hotel. The courtyard might be empty for a couple of weeks but soon it will have a Veuve Clicquot pop-up bar truck there, with an adjacent frozen yoghurt station. Before that, however, it is Easter egg time, and of course there will be special eggs. The pastry chef has designed two different samurai eggs, both about nine inches high, and you can imagine that kids of all ages, even those who reached pension age some time back, will revel in what you can do with eggs like these. Who knows, some might even try them for breakfast.