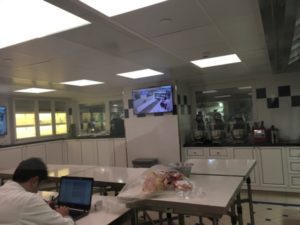 Admin at the cooking school

A lot has been written about the time and money spent on renovating The Ritz Paris and the gal had to see it for herself. One of the most fascinating parts of the tour was actually going back of house to see the kitchens, where 120 of the total staff count of 600 work. Some are in the actual production kitchens – see above – while others are managing or teaching in the cooking school. Yes, it could well be said that it is almost as though nothing has changed in this intentionally classic luxury hotel. What was there before is still there, with a few additions, and of course there is masses of new technology, most of it unseen. 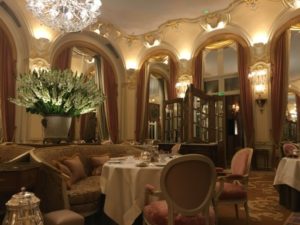 Two glorious wrought iron and glass conservatories now protrude into the garden along the south side of the 142-room hotel. One provides an extension to L’Espadon, the other adds area to the main bar (both can have their roofs pulled back during the summer). There is now, by the way, an extra bar, at the rear of the main building – it is a really snug, and not surprisingly very popular. Other new features include a library alcove off the main lobby walkway, which offers afternoon tea, with foods on three-tiered curate stands specially designed by the hotel’s exclusive china manufacturer, Haviland, and to-go breakfasts to complement the elaborate, no-buffet in L’Espadon (€45 for basic continental, including tax and service). 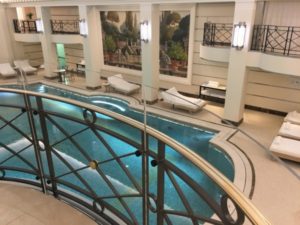 Looking down to the glorious pool

Then there is a new and attractive indoor shopping arcade, with a Ritz boutique currently advised by The Webster in Miami Beach, but probably style icon Inès de la Fressange, who works with Uniqlo, will be brought in. The Ritz Club gym, which was really rather an after-thought before, is now a statement destination, with an excellent selection of Matrix equipment and absolutely perfect fruit, on silver stands, naturally – you look down at the famous pool as you walk to the gym, which opens at 6.30. 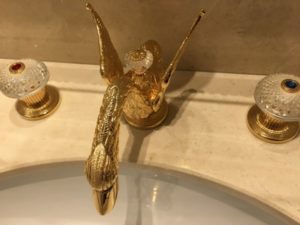 Because of the luxury hotel’s fire this January, there are still under a hundred rooms operating and I was not able to see the famous Chanel Suite (the spa is Chanel, by the way: take a signature treatment and you get a day pass to the Ritz Club, for gym, pool, sauna and so on – you can also buy day passes, which would make much appreciated Christmas presents). My room, 120, was a golden delight, as you will see from the video below, though I kept on trying to turn on the swan’s wings instead of using the actual bejewelled taps. NOW SEE A VIDEO OF THE CHANEL 2016/2017 FASHION SHOW AT THE HOTEL