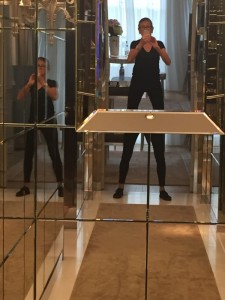 Work this one out!

Now is indeed the time for the rational world, everywhere, to support Paris and to bring the City of Light back to its usual glory. The gal switched things around and was able to visit four of the city‘s loveliest luxury hotels (sorry, all the rest of you, but unlike squeezing students into a VW Beetle to get into the Guinness Book of World Records, it is just not possible to fit more hotels into a mere 36 hours). First on the list was Le Royal Monceau – Raffles Paris, which on December 14th, just a month after the atrocities, was brave enough to put out an amazing package, room with breakfast, your choice of a full bottle of red or white wine and Pierre Hermé macaroons and more. As always, this hotel offers endless photo opportunities, like a selfie in the closet of suite 241. 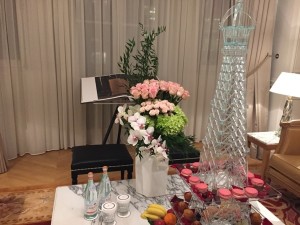 The Eiffel Tower, macaroons and Leibowitz

Also attracting the cameras were the flower arrangements, all of them superb bouquets that are best described as bridesmaids‘ bouquets for a royal wedding. A still life in 241 shows off a display of those Hermé macaroons next to a sugar sculpture of the Eiffel Tower. Behind is the Annie Leibowitz SUMO book, so heavy it has to have its own floor-standing easel, specially designed by Marc Newson. Bother, I shall have to return. Next time I will find out which numbered copy, of the 10,000 print-run, this is, and whether the cover’s dust jacket is David Byrne, Whoopi Goldberg, Keith Haring or Patti Smith. Each copy, all signed by Annie Leibowitz, does actually come with all four dusts. I particularly like Annie Leibowitz‘s two-page photo of the Queen, but all 476 pages are fascinating. Some copies are actually offered on Istdibs at £1,612. 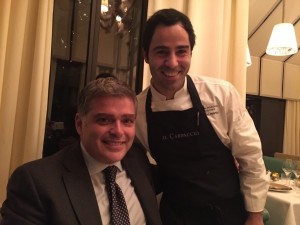 Omer Acar, who re-opened this hotel as GM and is now, as European boss of its owner, Katara Hospitality, was in more than fine form. He was actually ecstatic at the thought that Nobu Matsuhisa is to open a Matsuhisa here, come February 2016. He will take over the current French restaurant at both lunch and dinner – little re-design is needed of the Philippe Starck space. Matsuhisa will do marvellously here and the hotel can thus offer international and French comfort food in the bar (which, by the way, is already once again full, from after breakfast through to the early hours) and Italian. That is where we dined, in Il Carpaccio, and happy chef Roberto Rispoli suggested an artichoke salad with tiny wholewheat turnovers filled with pecorino and mint, and then pan-fried Mediterranean tuna belly with green tomato, and the divine Cedric Casanova olives and olive oil. (Note, next time back here I want to visit Cedric Casanova’s studio.) 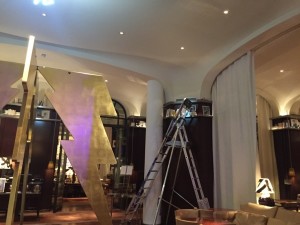 This luxury hotel has, since its 2010 re-opening, been primarily associated with Philippe Starck when it comes to art. Now it is also working with Paris-based sculptor Didier Faustino, who has just installed a yellow stage, This is not a Love Song, in front of the Architectural Association headquarters in London‘s Bedford Square. Le Royal Monceau – Raffles Paris has Faustino’s The Lightning Tree in its main lobby, and small copies, in Christmas-snowflake glass balls filled with gold dust, on tables throughout the hotel. See the main sculpture in the photo here – and, on the right, a worker up a ladder shows that they do actually dust the hotel’s ‘library‘, which M Starck typically and totally impractically has set about 12 feet above the ground.