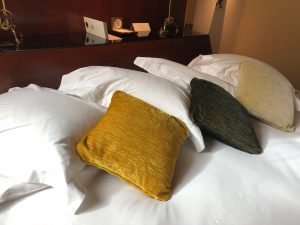 Park Hyatt Paris-Vendôme describes itself as a ‘Classic Luxury Hotel in Central Paris’ but the gal dares to suggest it is under-selling itself.  This is the hotel, 100% owned by Hyatt, that is always coming up with surprises. Its 188 bedrooms have just been tweaked by Ed Tuttle, who did the original look when it opened in 2002. Instead of harking back to the last decade of the 19th century when this had been headquarters of Isador and Jeanne Paquin’s fashion empire, he went for timelessness, characterized by dozens of flying-angel sculptures as door handles, sconce decoration, you name it. Now, in the 2019 update, courtyard-facing room 330 with light tan everything, including window sheers, evoked thoughts of smiling in a caramel heaven, escorted by those supportive angels (see the video, below). I was fascinated by the unusual display of pillows, lying down rather than the usual ‘plumped up’. 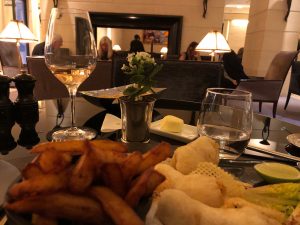 Want a really enjoyable Sunday evening supper venue?  I recommend the hotel’s Cheminée, also known as the lobby lounge which does actually have an impressive gas-fuelled two-way fire.  I joined what I took to be many locals, back after weekends at the seaside or up various slopes and wanting comfort food. The single-card La Toute Simplicitéby Jean-François Rouquette offered just that, dishes that felt like home.  My eye immediately homed in on fish and chips, so I wanted to see this universal dish Paris-style.  For the record, it came as three tempura-style goujons, with lettuce, and chips, rather than finer-cut fries, in a little wire-mesh basket.  Here is a surprise on the wine front. Sacha Lichine’s phenomenally successfulCôtes de Provence Whispering Angel Ch D’Esclans 2018 is among the wines-by-the-glass and, guess what, itwent perfectly with the goujons.  My server, somewhat surprisingly, was wearing a striped t-shirt and blue jeans: I found out later that she had been pulled in from the outside courtyard to help the busy Cheminée. 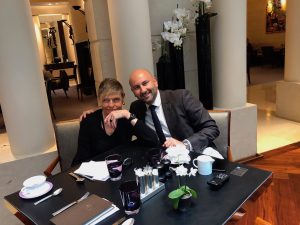 Let me tell you about the hotel’s open central courtyard, a feature of so many historic Paris buildings. Ever since the GM, a creative Italian with a name, Claudio Ceccherelli, that suggests he is going to break into Nessun dorma at any moment, ever since he first started stage-managing the building’s inner outdoor-space he has not stopped. In summer it is a themed terrace. In winter, he installs a proper wooden chalet, alpine without the Alps. At first he had it sponsored, and then he realised it would garner more marketing publicity, and incoming euros, if instead of having season-long sponsorship he rented it out on an ad hoc basis to such companies as Panerai, who have a sales vitrine in the hotel lobby. And that is what will happen this winter, says Ceccherelli’s right hand, Roger Saad (Mr C was away selling in California – the entertainment crowd loves this hotel as it is so discreet). 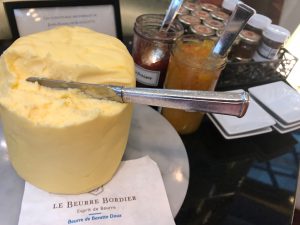 Although admittedly Paris Fashion Week was coming round once again, judging by the chic fashionistas around at breakfast, the glad-rag teams also hang out here. Breakfast is actually show time, thanks to the buffet, which has a mirrored overhang set at such an angle that you see everything at least twice. Of course everything is the best – the butter is Bordier. No, I dare to suggest this luxury hotel is far more than just ‘classic luxury’.  It is timelessly edgy, with continual elements that make you say wow. I realise I have not even mentioned the hotel’s Michelin-starred Pur restaurant.  You must have a Michelin star in Paris, says Roger Saad. Well, with the soaring costs of labour, let us see what happens in the next decade. SEE ROOM 330