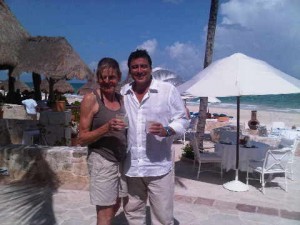 Welcome to Paradise, says Federico Echaiz, MD of Maroma Riviera Maya by Orient-Express.  Arrivals are offered margaritas, an immediate welcome to this stretch of Mexico’s Atlantic Coast, half an hour’s drive south of Cancun.

330 flights a day come into Cancun airport, bringing tens of thousands of Americans, and South Americans and Europeans to this idyllic area.  But only the lucky few can stay at Maroma, which has merely 65 rooms and suites, and on this visit the gal was fortunate to be among that number.  (Stay here, by the way, and you can get access to a very pleasant airside lounge, on departure.)

Once again, the luxury resort was completely sold out, for yet another perfect wedding on the beach.  This is the ideal spot for special events, including  gay weddings. 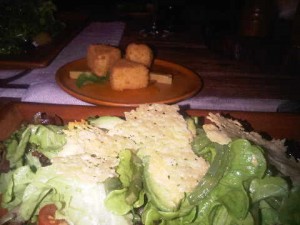 A dinner salad, topped by a parmesan crisp, includes nopales.....

Maroma, says Echaiz, is unique for its pristine beach, its authentic Mexican atmosphere, its highly engaged staff – it is Trip Advisor top hotel in the entire area, and most comments wax lyrically about the staff – and its fabulous food.

The chef is Juan Pablo Loza, from Mexico City.  A most engaging young fellow who even encouraged me to try a grasshopper, a single chapulin or Sphenarium which has been thoroughly cleaned and washed before being toasted on a clay cooking surface with garlic, lime juice and salt with extract of agave worm.  Been there, eaten that. 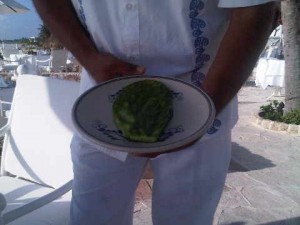 .. or strips from the pad of prickly pear cactus (without the thorns!)

El Sol is this Orient-Express resort’s more experimental restaurant.  I started with a mixed salad, which had avocado, lots of leaves and a parmesan crisp.  It also had epazote, which I find out later is a herb that is variously called Skunkweed, Wormseed, Mexican tea, West Indian goosefoot, Jerusalem parsley, Hedge mustard, and Sweet pigweed.

The final ingredient, which I could not identify at the time, was nopales, which turns out to be the cladode, pad, of a prickly pear cactus, which has been carefully peeled to remove the spines.   I am told later that Mexicans sometimes fry this up with eggs, at breakfast. 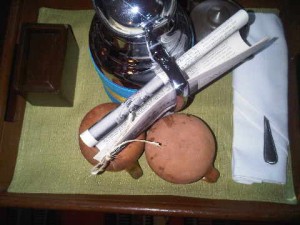 My own morning started with the complimentary beverage that is offered in all suites.  My coffee arrived at the appointed hour, enough of it for four people rather than one.  The ceramic cups were a reminder of the sense of place.  This is the case everywhere at this resort.

Authentic Mexican atmosphere is stressed again and again.  In suite 65 I have a bright Mexican beach bag and a couple of linen kaftans, plus a local wrap.  The toiletries are made by Yucatan Herbal, although somewhat confusingly they are distributed out of New York.  Local music wafts from the Panasonic player (thankfully, there are no televisions to bring in the rest of this frenetic world). 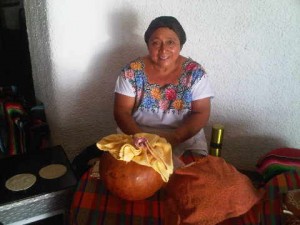 As Federico Echaiz says, stressed New York executives arrive here and immediately feel in a different world.  A real world, with character. At the entrance to the indoor-outdoor breakfast venue, a mature lady sits making tortillas.

Everyone calls her Latia, aunty, and many guests sit with her to learn how to make tortillas, named by the Spanish in the 16th century.  According to Mayan legend, they were invented by a peasant for a hungry king, and way back in 10,000 BC it is thought people were eating native maize breads with dried kernels. 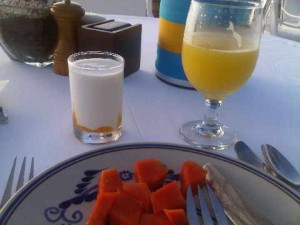 This is a hotel that believes in all-served breakfast.  You sit and your order is brought to you.   There are lots of suggested main course dishes, including eggs and waffles and a whole range of Mexican dishes, but they are also instantly flexible.

My request for healthy simplicity is met with ‘of course’, and it arrives swiftly.  The juice is just-squeezed and marvelously un-sweet. The home-made yoghurt choices are plain, or with a fruit purée base (I chose mango), and instead of mixed fruit I just had papaya.

Here in Mexico we eat ours with lime, I was told.  Home-made jams include mango and, interestingly, sweet potato, and of course there was yet another sea of coffee. 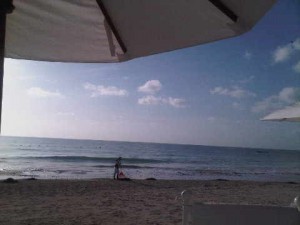 .. you can watch, 50 yards away, men in scarlet sashes minutely cleaning the pristine beach

There is lots of activity.  Turtles nest on the beach here July through August and, because of that, instead of clearing away seaweed with a dredger, Echaiz employs four men, in white uniforms with scarlet cummerbunds, patiently to sweep the beach each morning.

I watched them as I finished yet another cup of coffee.  In an hour or so the beach will be busy, with hotel guests relaxing on the bright blue double bed loungers that are set at discreet distances from each other on the sand. 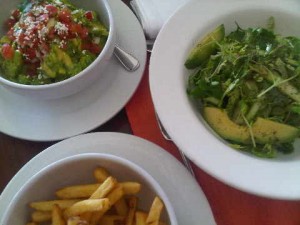 Blue, and white, are the colours here (yes, they were the colours a couple of days ago, back in Bavaria).  Here you have the near-white beach, and the pristine white of the loose-fitting uniforms of all the male staff, some of whom also wear white Chicago-type or straw hats. Blue is the water, and the sky, and the golf buggies that some use to get around the 25-acre resort.

A matching Harley-Davidson, which I had assumed to be another hotel vehicle, sadly turned out to belong to guests. A typical day, for many, is relaxing and lounging and swimming – and eating and drinking.  Most lunch on the beach, or around the outside bar.  I decided to eat in, another yummy meal.

This is guacamole that sets a new paradigm, great big lumps of avocado in an avocado purée, with a separate container of spicey bits to make it hot to your own taste.  It came, of course, with tortillas, aunty-made presumably.  A green salad has yet more avocado in it, and thinnest strips of asparagus and broccoli.