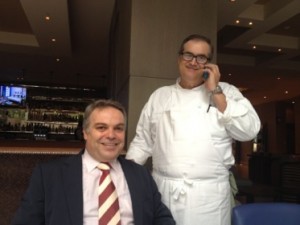 Panama City has so many luxury hotels the gal seriously wonders where all the business comes from – it is worth noting that the ambitious Panama Pacifico project is not including any hotels. From Panama Pacifico, take the Bridge of the Americas over the southern end of the Panama Canal to get into Panama City, and be prepared for what can be some of the world’s worst traffic (try to avoid rush hours). There is obviously a shortage of public transport, but also many of the roads seem to be one way. Take a wrong turn and you may go several times round and round before reaching your destination. 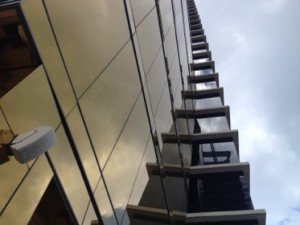 Exterior shot of the hotel

Finally I got to Grace Panama, a boutique hotel that seems already to have captured Panama’s Big Name locals plus politicians when it comes to eating and drinking. This is because the owner of the 60-room hotel, Saul Faskha, has brought in, to run all the hotel’s eatertainment Pedro Masoliver, who already had a significant gourmet following when he had his own freestanding restaurant in the city. Today, at the hotel, he runs 54 East, open breakfast, lunch and dinner, and does all banqueting and roomservice.   Try his Segovia-style roast pig roll, White seabass paella, or Catalan cream – yes, you ight have guessed, Pedro Masoliver is originally from Barcelona. 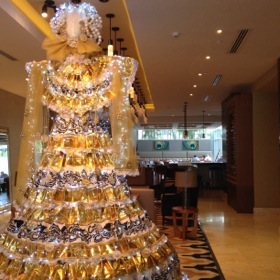 Grace Panama occupies the first and 12-17 floors of the 40-floor Twist building, with offices above – architect Alfonso Pinon’s exterior is like a soaring, slightly-twisted sculpture (they love architectural one-offs in Panama, with the sail-like Trump tower, and the multi-coloured Museum of Biodiversity by Frank Gehry, whose wife is Panamanian). Stay overnight at Grace Panama and you are welcomed on arrival with a glass of bubbly. You find interiors that are sleek and neutral, and all bedrooms have all-floor windows. I like the fact that tiny embroidered pillows in front of main pillows are, in fact, pillow menus. Clever. The hotel GM, Akis Neocleous, whom I had met at Las Ventanas, is bringing in lots of elements that say ‘hey, that is different’. Here is a 12-foot golden pollera dress, in the main lobby, designed by Jaime Luna, who has dressed at least one Miss Panama.

Watch this Jaime Luna show on YouTube (I wonder if he also dresses Justine Pacek, the Miss Panama who went on to become Miss Universe?). Akis Neocleous has taken this luxury hotel’s TripAdvisor ranking up from 21 to top in two months. How has he done it? Concentrating on detail, he says, and going all out on customer service. It also helps, he admits, being the only boutique hotel in this financial area of town. Yes, I am more than ever convinced that small is beautiful is one of the maxim’s of the ever-evolving luxury travel scene.