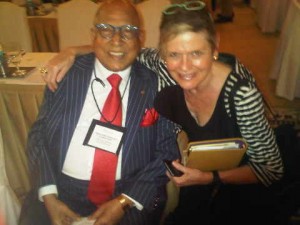 Host with the most, nearly-90 Capt CP Krishnan Nair, Chairman of The Leela Hotel Group

Hosting a mammoth event is difficult at any time.  The gal thinks of the complexity of Sir Philip Green’s 60th birthday party at Rosewood Mayakoba earlier this year.

Twelve months before, at the last-but-one Royal Wedding, Mandarin Oriental London Hyde Park hosted the day-before party for European royalty that the Queen gave, and nobody but nobody was supposed to know.

Come back to a week ago when the last Royal Wedding took place, when the stupidly-unshaven Crown Prince of Luxembourg married a brilliantly polyglot Belgian princess.  In Luxembourg.

This used to have a lovely InterCon hotel which has since become a Hilton but other than that the only hotel of note is Le Royal, a Leading hotel which must have had more crowns than it ever imagined. 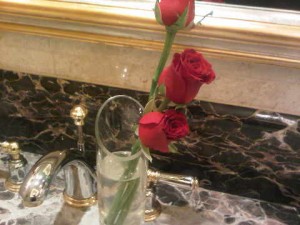 Roses in the bathroom...

Those running top hotels are used to important events but when they are royal they are an extra challenge.  And when the people staying with you are your peers then that is a challenge too. Leela Palace Delhi, led by the one and only Hon Chairman Capt Krishnan Nair, hosted the fabulously successful meeting of the Preferred Hotel Group this week.

Hotel GM Tamir Kobrin and his wife Katherine, who met when both worked at Ritz-Carlton New York Central Park South (she was chief concierge) knew they had 161 top hoteliers of the world staying with them, and they made sure all their hundreds of employees were spot-on.  Everyone seemed to know all these guests’ names, and they used them and pronounced them correctly. 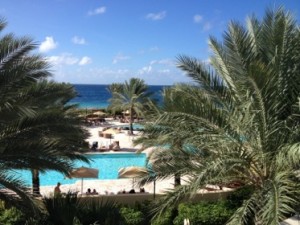 The hotel florists were working overtime.  There were roses in my bathroom, bouquets on tables by elevators and, by the swimming pool elevator (the 11th floor rooftop), a Chelsea Flower Show of blooms.

And what a lovely swimming pool – infinity along one side and you look through a glass wall, down over the city below. One end of the pool has a living wall. Both ends have golden cupolas, and terracotta hemispherical-roof gazebos with elephant heads at the top of the supporting columns.  The Hon Chairman is proud of what he has created here. 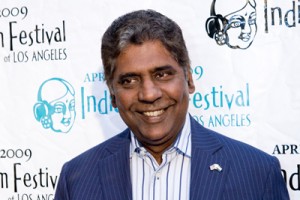 The Hon Chairman, Capt CP Krishnan Nair, celebrates his 90th birthday next February, and still  works harder than many who are only a third his age.  We had lunch in the big-glass-cube that is, imaginatively, called Qube.

He gets up at five every morning in his bungalow in Bombay.  He meditates for an hour, and does at least an hour’s exercise, with a personal trainer.  He must successfully shoot 15 balls through a basketball hoop, and walk at power speed around his big pool. He lunches today off clear chicken soup followed by a sizeable piece of fish.  He has a single glass of Castellare di Castellina 2009 Chianti. 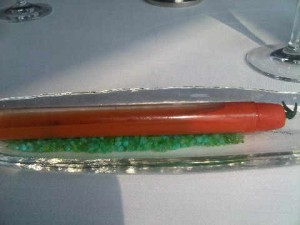 A MEGU starter, a test-tube of carrot and beetroot health drink, with a marzipan stopper

It was a Charme Pinot Noir Niepoort 2006 in MEGU that night.  How funny, I had never heard of Niepoort wines and now I have tasted’em twice in a week, DaDo in Macau and Charme in Delhi.  Apparently Dirk Niepoort was here a short time ago and he was charming, just like his wine name.

There are lots of charming people around.  I keep on running into one of India’s best-known tennis players, Vijay Amritraj, who is bringing a Rolex group here shortly.  This is the hotel, says Tamir Kobrin, that attracts local society.

I am told, elsewhere, that the local upper-class youngsters are called the spoils, living off daddy’s money (in Bangalore and Mumbai, it is their own-earned money, thanks to finance and IT). 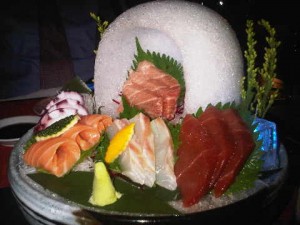 MEGU here is sibling to the lovely MEGU restaurant in New York Midtown.  This one is run by the hotel, but it has lots of genetic similarities.  Go into one of the rooms and you are greeted by a lifesize crystal Buddha. Spoon some water with red rose petals on to its lap, for good luck.

Go through to wherever you are sitting, inside or, as we did, out on the terrace, and perhaps let the chefs choose for you.  Our meal went through Ishiaki-style raw wagyu with 11-12 marbling through to a green tea cheesecake that was absolutely divine.

Along the way we tasted superb sashimi (the fish comes from Tokyo twice a week) and foie gras and wagyu croquettes wrapped in breadcrumbs that have no fewer than 23 added ingredients. 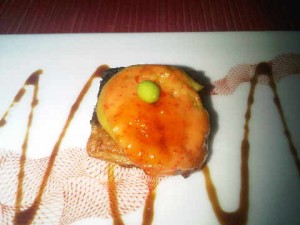 .. and foie gras, on a specially-designed plate

I soon got into a nice routine here at Leela Palace. Breakfast is definitely in Qube, for its amazing squeezed-for-you papaya juice and home-made baked yoghurt, and healthiest-possible roughage-filled wholemeal bread cut and lightly toasted.

We leave for the domestic airport (where next, then?) and Rajiv takes me at great pace past the Body Shop and Marks & Spencer shops, with their enticing wares, and to the American Express lounge.  He orders an omelette, which is made there, just for him, by the white clad chef.