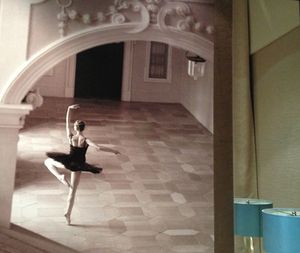 ‘Ballerina on the wall”

How unique can decoration become? This elegant ballerina gracing an entire wall of Vienna’s newest luxury hotel, Palais Hansen Kempinski, surely qualifies for such an accolade. Perhaps she is top Russian star Natalia Osipova. Whoever, she fits so suitably on the wall of a palace that was built in 1873 for the World Exhibition, which, says the gal, was dramatically downsized because of the collapse of Vienna’s stock market and a major cholera epidemic (a chess tournament was held instead). And she is not on every room’s walls, by the way. 135, a 650 sq ft Ring Suite – so called because it looks over Schottenring – is her ‘home’. 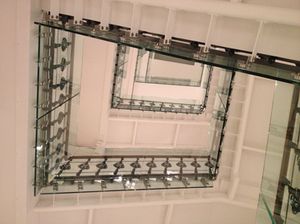 Looking up one of the staircases

There are magnificent stone stairs, going right up through the seven floors of the hotel. From ground floor to the corridor for suite 135, it is 42 stone steps. Stop about half way up, after 25 steps, and you come to the excellent Daniele de Winter spa (they like Daniels here; the concierge, who apparently can even get tickets for the always-full Opera or Spanish Riding School, is Daniel Wukovits). Carry on up to the suite, and you have a mushroom-hued cocoon designed by Frenchman Jean-Claude Laville.  The only colour he has put into the suite are two pale blue lampshades which flank Osipova. 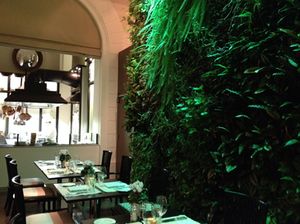 One of two living walls in Die Küche

There are so many things to make you smile here.  Go into the all-day restaurant, Die Küche, and you pass a pair of square living walls, both 12 ft high – next year, apparently, they will make these vertical gardens into herb gardens, ready for the chefs to pick.  Carry on, now, between the gardens to the cooking area, which has three square cooking stations. Lunch and dinner, counters around them become sit-up dining places.  At breakfast, they are displays for one of the world’s best buffets.  Well, where else does a chef squeeze oranges nonstop, and others check the displays of cold-cuts from the standing slicer (and there is a wall of breads, and gigantic blocks of butters, and I invented a new delicacy, avocado slices with egg-white omelette, finished with yummy croissants from Joseph, apparently THE Viennese baker). 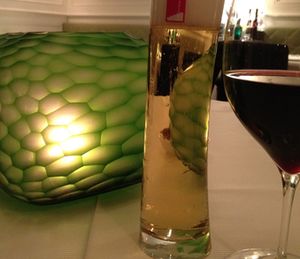 Is the eye deceiving, with this Pisa-like beer glass?

Fire extinguishers here are painted as joke coffee and cornflakes dispensers.  Go next door, to the dinner-only Edvard restaurant – named for the original palace’s architect, Danish-born Baron Theophil Edvard von Hansen 1813-1891.  This is fresh and original. The central candle looks as if it is in a carved green pumpkin. Lollipops are brought with the chef’s compliments (they turn out to be chick-pea purée balls). Ask for a beer and it comes in a glass that is decided wonky, though not as obviously as the Leaning Tower of Pisa.  Look at your plate and you want to pick up the rosemary sprig on it – but you cannot, as it is painted. 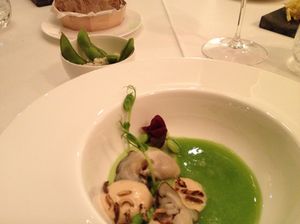 Oysters in a soup

The chef has a laugh, too. The apple-green menu has little paintings of a flat-capped porter, say, pushing a giant apricot.  It lists ingredients, only, not the method of cooking.  I start with what is listed as Beet/Ricotta/Saffron, and it turns out to look like a multi-colour necklace spread across an orange pool.  We all go on to Oysters/Soya/Wasabi, and this photo shows the result – the wasabi broth is poured on after the dish is brought to table.  My main course is Golden trout/Pumpkin/Yuzu and I get an orange creation, fish, pumpkin slivers and an orange broth. 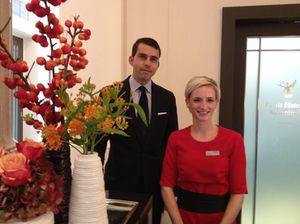 The colours throughout the hotel, however, are grey and silver, and masses of glass and light, and highlights of champagne, as in the silky furniture in the highly popular lobby, and red. The pianist at the lobby grand piano wears red and, of course, Kempinski’s signature Lady In Red, the lobby hostess, is in scarlet, in this case designed by Maurel in Milan.  She, Jennifer Linder (who came from Emirates Palace in Abu Dhabi and before that, Claridge’s, when she appeared in its famous reality-television show), was there, at the front desk of this lovely luxury hotel, to see me off, together with GM Markus Lueck – and displays of red flowers.