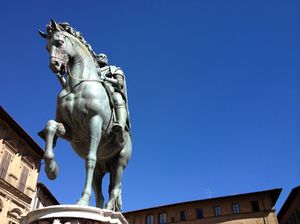 Cosimo de’Medici, in front of …

The gal believes strongly in educational and experiential travel (remember the joy of visiting Hublot). Thus, in Florence, there was just time to visit two icons. A luxury hotel should always be able to open doors, and Four Seasons of course can always do that.  Four Seasons Florence’s fabulous Chief Concierge Paul Lydka – born in Wales, brought up in Australia, now a long-time Florentine – arranged visits, and a detailed itinerary was handed over, in an envelope, on arrival. Would a taxi be needed?  No, a walk was much more healthy, and the doorman offered a choice of ambient or iced water on departure.  Twenty-five minutes later I was looking up at Giambologna’s 1594 equestrian statue of Cosimo de’Medici. 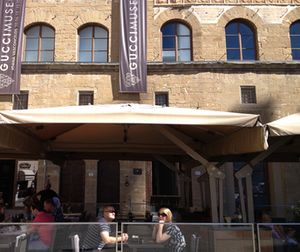 .. the Gucci Museum and its outdoor café

He dominates Piazza della Signoria, to the east of which is a magnificent palazzo that is now leased to Kering (which will always be known to many as PPR) for its Gucci Museum.  Outside, ideal for Florence’s long summers, is an open-sided café: there is also a first-class restaurant inside the building.  The museum as such closes early evening but the restaurant is open until 11pm.  The six euro charge to go into the museum is well worth it: Gucci’s Creative Director Frida Giannini has had a major hand in making it a really interesting display, over three floors.  The only regret is that photos are strictly not allowed. 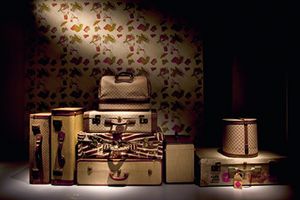 On the ground floor you see a history of travel baggage, beginning with some of the first 1920s pieces.  The company was started by a former lift attendant at The Savoy in London, Guccio Gucci, who came home and opened ‘G. Gucci, Articles for Travel, Florence’.  In the displays you see an early parchment-covered case, and a 1930s ponyskin case. There were diamond-patterned materials, later with the significant double-G logo that seems quite equestrian-inspired. In view of Gucci’s anglophilia and his love of horses, this, and the statement red and green braiding, was intentional.  Logo mania came in with a vengeance in the 1960s, to the extent that in 1979 Cadillac produced 200 Gucci-fabric-topped Sevilles, one of which is here, surrounded by early travel cases. 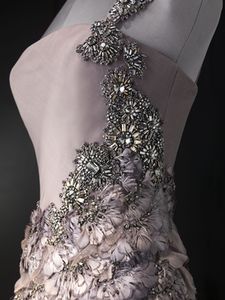 Displays of shoes are kicked off by the loafer introduced in 1951. There are masses of handbags, including quasi-triangular Bouvier bags, named for Jackie Kennedy, and bamboo handles, introduced 1947, and some bags with saddle-like flaps. There are shirt bags, with shelves inside for storing without creasing.  There is a modern steamer trunk, representing about six weeks’ work.  Floral dresses, scarves and Richard Ginori cups taking their designs from a scarf presented to Princess Grace, designed for Gucci in 1956 by illustrator Vittorio Accornero. Finally there are modern red carpet dresses, including this feather and Swarovski crystal creation that Frida Giannini designed for Salma Hayek, wife of Kering boss François-Henri Pinault, to wear at the Venice Film Festival in 2011.  On my way out, I saw another Frida initiative, bottles of Forever Today perfume conceived for Gucci by Italy’s best-known contemporary perfumier… 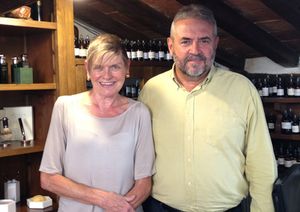 Lorenzo Villoresi.  His base is a mere 15 minutes’ walk from the Gucci Museum, over the Ponte Vecchio to the south bank of the Arno. Outside a four-floor palace, looking down over the river, that goes back to medieval times, I found this charmingly cuddly-bear of a philosopher who somehow, when researching religion in the Middle East, was introduced to the region’s unique aromas.  He brought back lots of smells, and started blending individual perfumes for friends. Later he did the same for friends-of-friends, one of whom worked for the Fendi family.  The Fendis were intrigued, and ordered a thousand aromatic candles for their homeware stores. Help. Lorenzo Villoresi and his wife set up a company and found suppliers.

Fendi led to contracts for Emporio Armani and Gucci, the writing and publication of 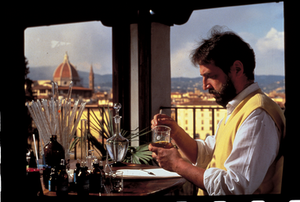 leading perfumery books and the award of the coveted Prix François Coty prize in 2006.  He got into hotel toiletries, supplying, for instance, Four Seasons Shanghai Pudong, where I first saw his distinctive octagonal-shaped rubber bottles – shampoo, conditioner, shower gel and body lotion with a scent that is unique for that hotel.  He is, in fact, mainly bespoke. Individuals of the calibre of Linda Evangelista, Billy Joel and Sting head here, to his studio, for a personal consultation.  What do you like, what do you not like? Your perfume today is probably different than it would have been a decade ago. He suggests a recipe and if you agree, it will go into your unique formula (you can always, later, buy more supplies). 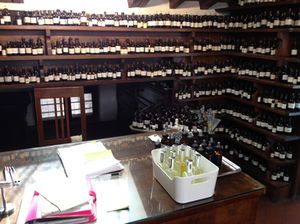 A thousand-plus bottles, in alphabetical order, line his office

He may use essence of iris root, which retails for 100,000 euros a litre. Chianti-farmed iris roots are, at three years old, uprooted and hand-peeled, then left for three years to dry before the tiniest extraction is possible…  this could be in your recipe, but never mind, his consultation price is the same whatever the eventual ingredients.  He does also sell his own, Lorenzo Villoresi, toiletries, off the shelf for men and women; perfumes include Piper Nigrum (1999), “reminiscent of the spice route and his memories of African markets”; Dilmun (2000), “the mythical Mesopotamian paradise, a vision of sun and citrus fruits, a memory of the evocative legends he heard during his studies”; Teint de Neige (2000), “the Belle Époque…the rosy hue of a powdered face. The unmistakable scent of perfumed powders, the fragrance of face powder, the perfume of talc, a soft, gentle, enveloping eau de toilette”; Yerbamate (2001), “an endless expanse of grass and wild flowers, reflecting his love of nature and wide open spaces, of the tea and maté ceremonies”, and his most recent, Alamut (2006), “a sumptuous oriental-style perfume characterised by warm sensual notes and highly precious flowers, on a rich base of rare exotic woods. Alamut evokes the legends of the Near East, enchanted fortresses overflowing with delights, the Thousand and One Nights, the Gulistan and the flowers and scents of secret gardens”. He also has a superlative range of men’s shaving products, some in a Carrara marble casing. 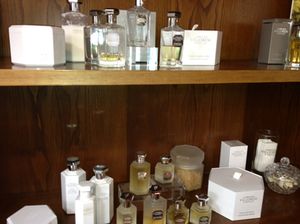 A small display of his products

Lorenzo Villoresi is currently turning the basement and bottom two floors of his family home into a study centre, with a perfume museum and library and courses for non-professionals who want to learn more – this should open by middle of 2014.  It will have a café too, promises Lorenzo Villoresi – will it serve perfumed afternoon teacakes?  I head back to my lovely temporary home in Florence’s most gorgeous luxury hotel, Four Seasons Firenze, and get ready to take a shower, using Lorenzo Villoresi products, of course.  As I wash away invisible dirt I think what a lovely place this would be for a wedding, and in fact Four Seasons Firenze is hosting a wedding fair on Sunday October 13th, 2013.