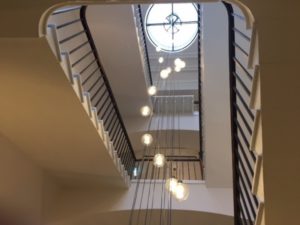 Looking up the stairs

This is Jane Austen year. The 200th anniversary of her death, at only 41, is July 18th, 2017. From September she will be the one face (apart from the Queen’s) on the Bank of England’s new £10 notes. The novelist spent the years 1801-1806 in Bath, and the gal is sure that in today’s world she would have introduced the luxury Gainsborough Bath Spa hotel into her novels. Look, above, at part of its unique thermal waters, exclusive to hotel guests and a few local members: look, left, at the elegance of the hotel’s staircase, 125 stairs in all from the lowest, wellness, area, up to the top.   The building was not even there in Jane Austen’s time, says the gal: it opened 1826 as the Royal United Hospital, and later became part of Bath Technical College. Today it is what the owner calls ‘Claridge’s of the West of England’, a 99-room hotel designed by Alexandra Champalimaud. 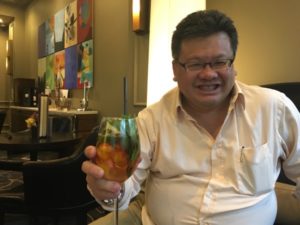 Dato’ Mark Yeoh and his family, working as YTL, were determined to have a Bath hotel as they own Wessex Water, based here. Luckily, I coincided with his flying in, for a board meeting, and we met over that very English of summer drinks, a Pimms. We talked about how Bath’s reputation for ‘taking the waters’, particularly prevalent in the 18th century, came about. Royalty, aristocrats and gentry habitually drank wine out of lead containers, which slowly poisoned them, and made them feel bad. So, from their London homes, they came to Bath, by meticulously timed stage coaches. In Bath, they floated like weightless astronauts in the thermal pools, which caused them to excrete more fluid than usual, thus clearing their systems. They then went home, started drinking wine again and the process repeated itself. 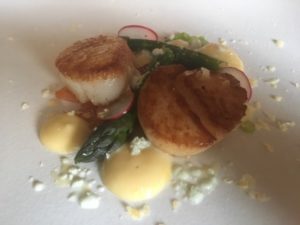 This hotel is special, and not only for its unique spa facility – spend hours in there in pools at different temperatures, and in the sauna and steam room. I was impressed by the knowledge and skill of a Moroccan male spa therapist, and by the thoughtfulness of a Hungarian female colleague, brought up in a culture of healing waters. It was thoughtful, too, to find in bedroom 210 (see the video below) a Roberts radio, a tiny real pillow holding the pillow menu, and a top-opening safe, easily seen in the closet. But I did not spend much time in 210, alas, because the hotel’s other areas are so enticing. Many hotel guests tonight were eating simply, in the lounge bar; we were dining in the main restaurant, a lovely room imaginatively divided by ceiling-high, glass-fronted wine walls. Dan Moon’s food is beautiful, and tasty, though while waiting it is tempting to eat all three of the finger-sized breads, seeded brown, rosemary sea-salt and smoked Cheddar, that come in a wood box. 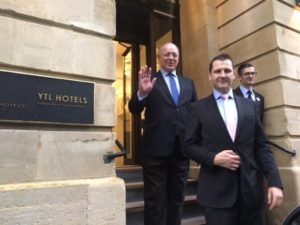 I started with scallops, with asparagus, radish, wasabi and duck egg mayonnaise, and a glass of Chilean Carmenere Reserva Lorosco, went on to lamb – not surprisingly, this is becoming a popular dining venue for Bath’s locals. It is equally evident that this luxury hotel is already a favourite destination for weekenders, and others, who come for the waters, Jane Austen memories, the city’s many museums and superb shopping, and for the hotel’s justly-lauded service. After only two years open, 22 percent of guests are repeats, says Gainsborough Bath Spa’s very-English MD, Andrew Jordan, who of course was on hand, with his equally-hospitable right-hand man, Glaswegian Brian Benson, to say goodbye as I was walked to the rail station, all of six minutes away, by a charming Egyptian manager.