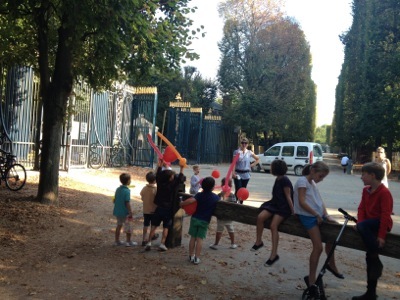 Sometimes, not always, the gal knows what to expect when arriving at yet another luxury hotel. Some 15 years after the last visit, it was time to head 15 miles out of Paris to what seems like the rolling French countryside, the area of Versailles. What a delight, on a sunny Wednesday afternoon when school children, who have a half day to allow their teachers to put their feet up and have a cup of tea or whatever, were playing in parts of the 1,700 acres of Versailles. This area is pedestrianised, but great for hiking, biking, running and strolling, and admiring the sheep grazing in fields that come right up to some of the Palais grounds. What would André Le Nôtre, who laid out the park, think? 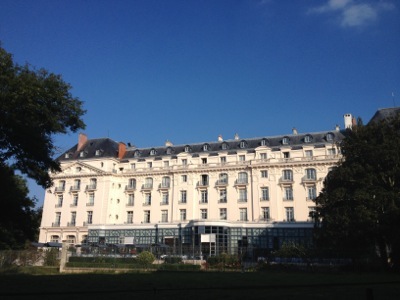 Trianon Palace Versailles, A Waldorf Astoria Hotel is part of the whole complex. It was Louis XIV, 1664-1710, who first built a chateau here. Much later, in 1910, Weill Martignan asked architect René Sergent, who also did Hotel Plaza-Athenée Paris, to design a hotel in a style to suit what the king had chosen. The result is a magnificent six-floor building – if you include the two towers, one each end – with 99 rooms.   The hotel works in tandem with a parallel building, the Pavilion, which has a hundred rooms. Everyone shares facilities but, cleverly, the pharma and other business groups stay in the Pavilion to satisfy eagle-eyed accountants and financial overseers. 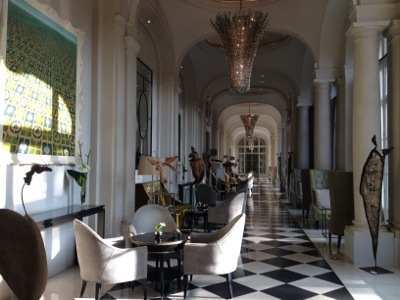 Trianon Palace Versailles has gracious ground floor reception rooms leading off a long gallery, opening to sitting areas along one side so you can see out to the absolutely gorgeous grounds (the hotel has eight acres of its own, adjacent to the entire Versailles park). And yes, as Girlahead followers know, a hotel that has proper staircases, for guests to use, is highly appreciated. I love climbing up and down rather than using elevators. As it happened 602, one of the two tower suites, was ideal for keeping fit as the elevators only go, anyway, to the fifth floor; from the lowest level of the integral spa up to my room was 187 steps. 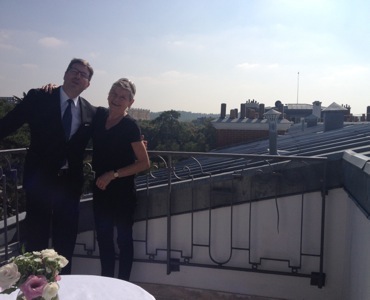 Gregoire Salamin on the rooftop terrace of room 602

Gregoire Salamin, who has been GM of this luxury hotel for the last three years, showed me how 602’s terrace, big enough for four to dine, and more than that for drinks, has stupendous 360-degree views over Versailles, the chateau and the parkland. He told me this was where the Treaty of Versailles was signed, in 1918 – a gold plaque in one of the gilded meeting rooms gives all the participants’ names, led by Georges Clemenceau. And then it was time to head for serious exercise.