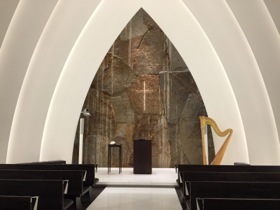 All respectable luxury hotels in Japan have wedding chapels, but few are as beautiful as this, at InterContinental Osaka. Designed by Yukio Hashimoto – who also did the interiors of The Peninsula Tokyo – the far wall has water continuously trickling down it. When necessary the cross, which is projected on, can be replaced by a company logo. The chapel was also the setting of the last of the first series of installation art held at the hotel, when a local female artist, Yutaka Moriguchi, showed her video here. It is a brilliant promotional job, says the gal, as by bringing in artists you bring in the community. The first series of installations kicked off with a wood tree made here, in a hotel space, by design students orchestrated by revered interior designer, Shigemasa Noi. 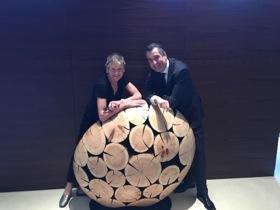 This was followed by painted paper hanging chandeliers (Shiho Ueda), then freeform calligraphy hanging (Kasetsu), then a photographic advent calendar (Go Murahigashi), which covered the whole wall of Adee Bar, and next Riusuke Fukahori painted his renowned goldfish on a screen. Some other art in this 200-room hotel, however, is permanent – it made me feel at home, immediately, to see Jaehyo Lee’s ball in the lobby; I thought immediately of his wood-trunk tables at Park Hyatt Zurich and a table in his home town, at W Seoul. The GM here in Osaka, Hans Heijligers, truly understands the importance of being part of the art community here. 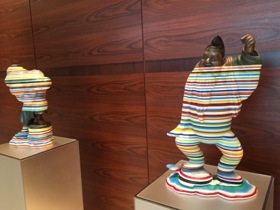 New to me, however, is the recognisable sculpture of Kyotara Hakamata, born in Shizuoka in 1963. Here his line up of unique acrylic and bronze figures is called Ebisu 2013. Hakamata-san studied in Philadelphia under the Japanese Government’s overseas study programme and later, in 2012, he won the Gotoh Memorial Cultural Award. Oh what a difference art makes to a hotel. Mind you, this hotel, which opened July 2013, deliberately set out to raise the level of the InterCon brand’s perception. It is, to me, up there with Atlanta, Chicago, Geneva, Hong Kong, London and Sydney when it comes to stylish spend on art and ambience. 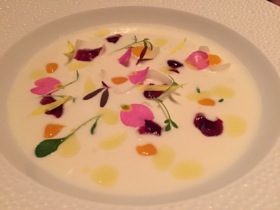 It already has a Michelin star for its Pierre restaurant, bulging with local gourmets that night. Try one of the hotel’s own-label wines, say Clarendelle 2005 by Ch Haut-Brion, named for Clarence Dillon, who bought Haut-Brion in 1935. I started with a carpaccio of shrimp and bottarga but I must say this soup, also on the table, is one of the prettiest dishes I have seen in a luxury hotel restaurant for a long time.