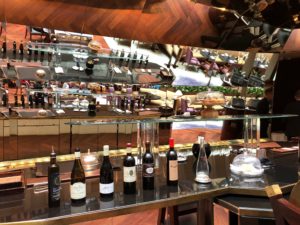 Park Hyatts never stand still. As the gal found recently at Park Hyatt Tokyo, there are always innovations, or at least evolutions, and often in the departments of food, wines and other drinks. Park Hyatt Paris-Vendôme is no exception. This is a luxury hotel which offers Michelin-starred through to summer terraces. The rear of the lobby lounge, which itself is a flower garden of white orchids, has as a central sculpture a glass-backed serving area, above, that becomes a buffet every breakfast (this is the only Palace hotel to serve a buffet at breakfast, apparently, and one wonders why others do not follow suit). 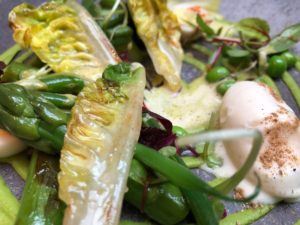 Chef Jean-François Rouquette offers daily specials at lunch in the lobby lounge, now called Les Orchidées, in honour of the flowers, or is it vice versa? Today, his menu, which had a choice of two starters, two mains, two desserts, was stressing green asparagus and wild salmon – one mainly-asparagus and one mainly-salmon starter, one mainly-chicken and one mainly-salmon main. I chose, to start, green asparagus, French beans, quail’s egg, sorrel zabaglione, and followed this with grilled organic salmon, red wine sauce and – yes, more – green asparagus (no room for dessert, not surprisingly). The area around was packed with business people, all the men wearing ties, all evidence of the fact that Parisiens do know their food. 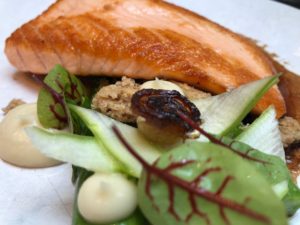 More and more of the hotel’s international business guests, by the way, subsequently return with their families, for vacations – one secret to such bonding, says Coralie Malazdra, who has been part of GM Claudio Ceccherelli’s team for just over a decade, is use of their names, which Americans, in particular, really appreciate. They love staying here for proximity to shopping, and for sites in general, and for the staff, and the ambience. They also find something new, with each visit. This coming month, for instance, Les Orchidées evolves to Sens. 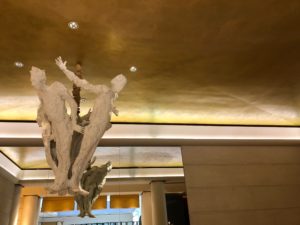 Sens, what will this be?  Well, expect a more rustic casual dining venue, and the adjacent bar renames itself Le Couture, with some cocktails served in stemwear ‘dressed’ as miniature mannequins. During Paris Fashion Weeks the hotel is taken over by seven designers who host their collection-shows here, and editors love staying here too (do they, too, smile when they pass some of sculptor Roseline Granet’s flying angel figurines on their way out?). This is indeed a luxury hotel for the lovers of fine, and fun, things in life. NOW SEE A SHORT VIDEO OF THE LOBBY LOUNGE’S VERSATILE SERVING AREA