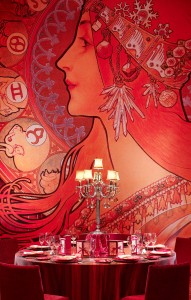 A scene at the Opulent Ball, to beat all others

Opulent is one of a long list of words that are not often used in today’s travel.  Luxury, as many say, is overdone but what is there to replace it?   Authentic and experiential suffice at times.  Well, opulent is the by-line of the Grand Hyatt Macau all right.

They held an Opulent Ball here September last year, to thank friends for their support of the 791-room hotel.   This year they will switch to an Old Shanghai theme, with personnel suitably clad.  They obviously like dressing up, here. 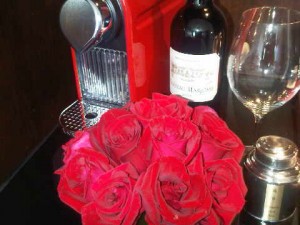 All this, and opulence too.. Look at what the gal found awaiting her in room 3177, a corner two- room suite.  Red is the colour for China, and since about 90 per cent of people staying here are from the Mainland they too must love red flowers, a red coffee maker and, of course, red wine, especially if it is French.

This bottle is Ch Marjosse, 2008. Look out of the suite at two siblings, the Hard Rock Hotel on your left and Crown Towers, on the right. The owners of the complex, Macau’s Lawrence Ho and Australia’s James Packer, commissioned the marvellous Miami firm of Arquitectonica to be architects. 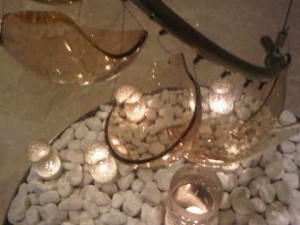 It is Arquitectonica that wants to turn the Miami Herald building into a futuristic Genting casino city, if they ever get planning permission… Inside the hotel here, Ho and Packer have spent, heavily.

In the three-floor lobby hang a pair of 20-foot chandeliers, one copper and one silver, by a Chinese designer called Danny Lee.  Isala Spa’s reception has a transparent glass artwork by the Czech artist Jitka Skuhraya of Lasvit, the company that has turned Jumeirah Etihad Towers into Abu Dhabi into another art paradise.  Love Isala Spa – try Yvonne’s deep massage to get over jetlag, or too much work. 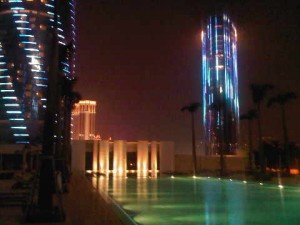 Looking down the so-long pool

Or try a few lengths in the pool.  Set yourself a goal, beforehand, and you will be in for a surprise.  Ten lengths could take quite a time. The pool is a staggering 125 feet long ….  and deep enough so that even Jeremy Lin could swim without grazing his precious basketball knees.

The lifeguard on duty when the pool opened was surprised to see me, or anyone.  Gamblers do not swim early, it seems.  He, the lifeguard, is from Ho Chi Minh City and his eyes lit up when he heard I had been there.  Now, at night, it is time to rush to dinner. 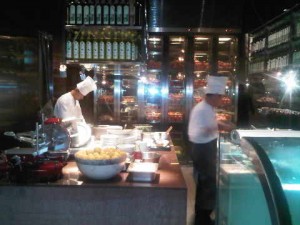 Mezza9 in Singapore has been a hit ever since it opened 13 years ago.  My Brazilian friend Claudio Salgado was opening manager and we talked about how it revolutionised eating.  You could choose any kind of food style, regardless where you sat.

Chefs cooked to order at different kitchens, one doing woks, one doing cold cuts and one desserts, and so on.  And somehow you and the rest of the table got exactly what you wanted at the required time.  This is now being duplicated, here at Mezza9macau, and the same thing happens. 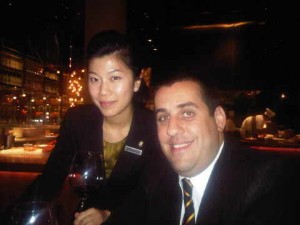 Even if all 292 seats in the restaurant were occupied, everybody would get exactly as they ordered.  The manager here is another Brazilian,  Carlos (Brazilian food guys  all seem to be Claudios or Carlosses….).

This one, Carlos Netto, comes from São Paulo, while Claudio Salgado, who has risen up the professional ranks to be hotel manager of Grand Hyatt Macau, is from Rio de Janeiro, the Ipanema Beach part.  Carlos’ main partner here at Mezze9macau is the sommelier, Maggie Mak, who became passionate about wine at hotel school in Macau. 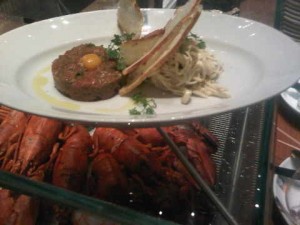 For us, a party of Brazilians, Brits, Japanese and Malaysians, she chose a Portuguese wine a DoDa 2008, made by Alvaro de Castro and Dirk Niepoort. Maggie carefully explained it is a blend, half-half of Douro and Dão wines (hence the name, DO + DA).

The grapes used are Touriga Franca, Touriga Nacional, Tinta Roriz and Tinta Amarela.  The wine was aged 20 months in French oak and bottled July 2010.  It went beautifully with Carlos’ beef tartare starter – but then, to be honest, a red wine drinker can drink red with anything. 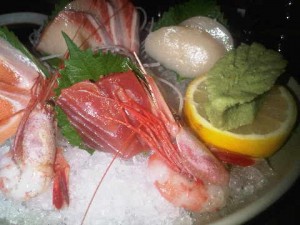 Some of us started with salmon carpaccio but I went further, with a dish of sashimi.  Shades of megu yet again, shades of the eight-person sashimi and sushi bar in Tokyo…  The menu here is divided into Dishes for two, and Deli, and Sushi, and Steam basket, and Wok, and Macanese, and Grill.

You can get beef from Cedar River Farms AZ, or Wisconsin Prime, if you want American – or Irish Hereford, or Australia’s Darling Downs wagyu and South Victoria Black Angus.   The most expensive dish in this section is a Wagyu tomahawk weighing 1,500 grams, with marble grade 5.

Chinese diners, by the way, often simply order the most expensive item they can see, and then eat it at lightning speed. 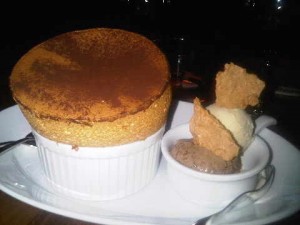 .. and a Bailey's soufflé

Desserts have their own section, and you can watch them being made.  The best-seller is a Bailey’s hot soufflé, with almond and chocolate icecream.  We had a tasting plate as well, with a French bourbon vanilla crème brûlée and a frozen lemon parfait.

Gorgeous – and opulent.  That is the way to go, in non-abstemious lifestyle.