Len Blavatnik loves luxury hotels – he finances Alan Faena’s hotels in South America and now Miami. A couple of years ago he booked the whole of Belmond Villa San Michele for his wife’s birthday, and flew in Andrea Bocelli to sing. He used to stay at Grand-Hôtel du Cap-Ferrat – and he bought it. He stayed four or five times here on New Providence Island, Bahamas, at One&Only Ocean Club, and in June 2014 he bought the 35-acre beach-set estate, for $105 million, allocating at least a further ten percent of that to upgrade it. Having checked out the existing GM, John Conway, he sensibly, says the gal, kept him. 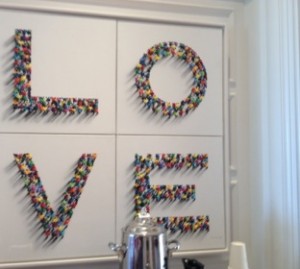 John Conway is shown in front of a dollar image composed of crumpled bits of metal foil. This is one of many artworks throughout the 105-room hotel’s main lodge public rooms that are by Jane Waterous, the hotel’s resident artist. Look at her LOVE, its four panels decorated with three-dimensional blobs of acrylic that look like little people. Why, I wonder, does the word ‘love’ inspire memorable artworks? I even have a three-inch stainless copy of Robert Indiana‘s famous LOVE in my bedroom back home: the original Indiana, with scarlet letters on a royal blue and fern green background, was created for New York Museum of Modern Art‘s 1965 Christmas card. 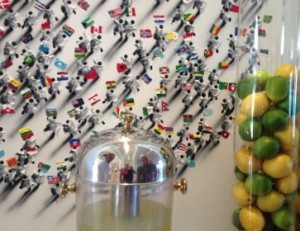 Another of Jane Waterous’ acrylic-blob works shows a globe of nationalities, with appropriate flags. The sheer imagination of this woman is mind-boggling. She has simple-smooches, outlines of lips, fuchsia pink or pillarbox scarlet and two feet across, acrylic on white backgrounds. And in the classic main lobby lounge, its cathedral ceiling rising to giant antebellum chandeliers, she has put four panels together to suggest an oriental woman, in wei or prayer. I look forward to meeting Jane Waterous when I come back to the Bahamas next time.

..and one person, only

I also look forward to seeing what Mr B(lavatnik) does to enhance his beautiful One&Only Ocean even further. With over 50 percent of those staying over Christmas and New Year – minimum stay seven nights – being regulars, it shows that this luxury hotel is obviously already getting so much right that many are happy with it just the way it is right now. But time evolves, and levels of luxury, as I said a couple of days ago, are rising the whole time…