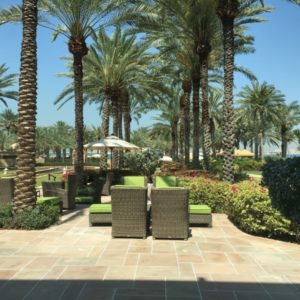 Looking down from the main lobby

Dubai IS hyper-adrenalin, in the main. It is a nonstop merry-go-round, but, as in the case of ‘stop the world, I want to get off’, you can escape, says the gal. One of those refreshers is One&Only Le Royal Mirage, which ever since its opening in 2002 has provided a discreet and elegant staging post for top travellers. This is the kind of luxury hotel where nothing is too much trouble. See the top photo. The gal asked GM Olivier Louis for a notepad. What arrived? A stylish black box containing a black tissue-wrapped white notebook with an alligator-look leather cover, the hotel’s silver logo not too big of course – and there was a matching white pen. 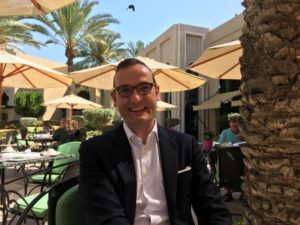 Go on, 22 stone steps down from the small lobby, to the ground level, and some of the 65 acres of stunning beach-set gardens. The great and the famous breakfast outside, year round, at tables beneath enormously tall palms: outside tables elsewhere are often set with chunky china to avoid chipping or breaking when dropped on a terrace, which will probably be stone, but here, at One&Only Le Royal Mirage, the china is green-edged Philippe Deshoulières, from Limoges. Butlers and waiters glide around rather than intruding, though they are there when you want them. You cannot hear neighbouring tables’ conversations but there are continual soft chirps of small songbirds. 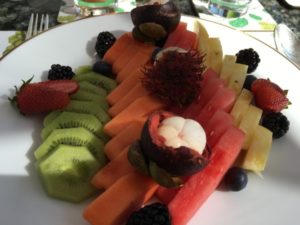 .. and a fruit plate

There is a delicate buffet, inside in the interior part of what is simply called the Dining Room, but Philippe Zuber, the President/CEO of the One&Only brand, orders a fruit plate. He, like Olivier Louis, is French. Why are the French so good at luxury, I ask, thinking of the two biggest names in the global luxury space, namely Bernard Arnault, founder of LVMH Moët Hennessy Louis Vuitton, latest turnover €30.6 billion, and François Pinault (FHP), founder of Kering, last annual turnover €10 billion? The answer, says Philippe Zuber, is two-fold. The French are extremely critical about themselves, and they are constantly pushing boundaries. 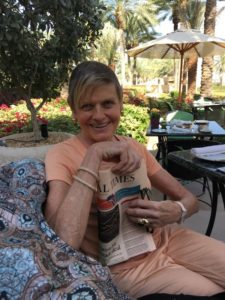 I think of other male French friends who sometimes use ‘But I am French’, with an enigmatic shrug, when  trying to explain something. I think of a French female friend, who can put a clear plastic bathrobe cover on over her normal clothes, to keep warm in Petra in snow that is extremely rare in Jordan (yes, this is true). She always, like all the French women I know, always looks just right (so how does dress to match the Financial Times fit the style scale?). Actually all those I see at this lovely luxury hotel are indeed elegant, albeit in a discreet style – see the video below, to give a better picture of One&Only Le Royal Mirage.