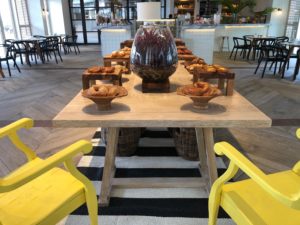 They have spent a lot of money at one of the world’s legendary resorts, One&Only Le St-Geran, named for a shipwreck off Mauritius.  The ‘they’ of course is the amazing resort’s owner, Kerzner, now headed by Dubai-based Mohammed Al Shaibani, who apparently is so detail-oriented that he wanted chair-backs in new rooms to have softer leather stitching, and the legs needed to move more easily.  The gal approves of such attention to detail, and the fact that His Excellency and everyone involved listened to what luxury customers were saying.  WiFi is now super-fast, all over the entire resort, outside as well as in.  And for those who are on other time zones and may wake up early, there is a stunning new off-lobby grab-n-go café. 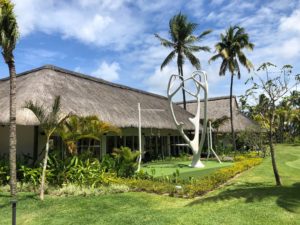 O&O sculpture at entrance to Club One

The spa, ESPA, now with 13 rooms, has been expanded, and is an oasis of calm (the noise of the gym, which used to be next door, is no more). The main golf course is gone, part of it to be 52 villas-for-sale, in years to come. Another area is now the well thought-out Club 1, with a white entwined O&O outside its entrance.  Club 1 has, in case giving up Gary Player leads regular golf addicts to withdrawal pains, a putting green and mini-golf.  It also has a stunning teen room, Tribe, with big Apple computers and a DJ corner that can turn that room into a disco: it has outdoor tennis and paddle courts, studios for Pilates and yoga, and a big Technogym – there is, in addition, one studio merely marked Sweat. 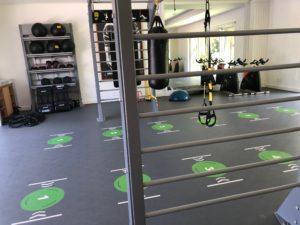 This is the TRX and spinning room, just right for the new breed of investment gurus who are flooding into Mauritius (according to a Financial Times article over 120,000 companies are listed offshore here and so far, in 2018, the island has seen $285.6 million of incoming greenfield investment compared with only $31 million for the whole of 2017). And visitors of all fields, and all ages, adore Le St-Geran’s new suites.  What were two adjacent rooms, same-sized, are now suites, with two full bathrooms: the sitting room has a sofa bed so it can sleep two, and add another bedroom the other side and you have a suite sleeping six (take a ground-floor suite, say #138, and you can walk straight out to grass, and the beach). 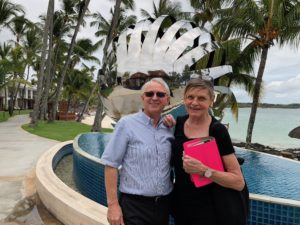 The new-look rooms, by Trevor Julius of DSGN, are as near perfect, from a customer viewpoint, as can be imagined – see a video below. But there is more. The former pool is now a quiet, adult-only facility.  Part of the total $60 million spend has gone to creating La Pointe, a peninsula spot that sees a casual restaurant-with-sushi surrounded on three sides by a wrap-round family pool, with cabanas – see a shot, above. Niçoise GM Charles De Foucault, who had done many openings in his previous days with Ritz-Carlton, does admit that the ten-month turn-round here was much harder, but they achieved it and the results, seen in average rate and occupancy levels, are spectacular. On re-opening day, December 1st, 2017, the first guest arrived by helicopter at 6.30 a.m. SEE ONE OF THE NEW SUITES, BELOW