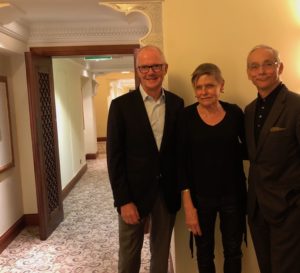 It was the night before departure and all through the house, in this case the luxury One&Only Royal Mirage, Dubai, complex, life went on as though nothing was happening.  This giant 65-acre resort used to be beachside looking out at the Gulf, and nothing else. Now thanks to the trillions spent in creating more land, The Palm and The World islands, sunsets have to share the picture with buildings. The gal was meeting up with Brit Michael Wale, recently arrived CEO of One&Only parent, Kerzner, and with Olivier Louis, the Frenchman who has masterminded this complex since it opened in 2002. 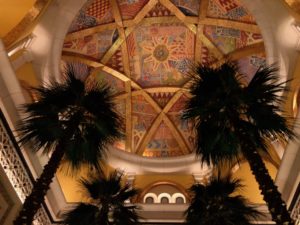 For the first time, my room was in the Palace, connected to both the Arabian Court and the Residence (and yes, it was mind-taxing and I never did find the gym that is used by all three adjacent properties, but that was because my stubbornness stopped me either using a map or asking the way).  Palace end suite 537 was so comfortable it would have been tempting to stay put, but Michael Wale had arranged an evening out. First we had cocktails in the sand in the beach bar – I discovered the very agreeable taste of a Schooner, namely Belvedere Vodka with Limoncello. 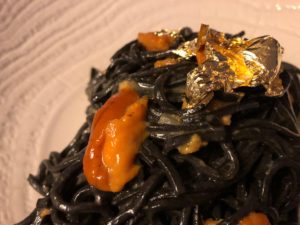 Then we took the resort’s boat shuttle, a superior yacht that must surely be a twin of the transfer boat that One&Only Reethi Rah, in the Maldives, uses to go back and forth to Male International Airport.  Our destination, ten minutes’ away, was 101, a floating seafood restaurant on the dock of One&Only The Palm, the youngest (vintage 2010) in the One&Only quartet of hotels here in Dubai.  This is where I discovered, by the way, that the right seafood is perfect pre-flight fodder: next time at 101 I will once again go for Yannick Alléno’s tuna carpaccio followed by fresh squid-ink pasta topped with gold leaf. 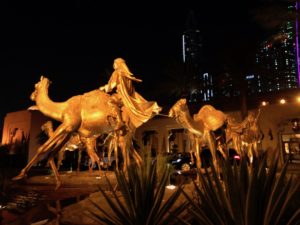 Michael Wale had just returned from gorilla watching at One&Only’s newest resort, in Rwanda (he admitted that when he started in the hotel business a few years ago he never dreamed he would one day have the honour of naming a baby-girl gorilla Paradiso, and he will be returning to see how she grows up).  He wants to grow the brand’s ‘nature’ properties, but he also wants to extend its luxury beach resorts, and go into city hotels and residences.  And then, a far cry from real-life endangered gorillas, he waved me off as a hotel car swept past the lifesize horse statues that grace the outside of One&Only’s The Palace, Dubai. THIS WAS OUR RESTAURANT SETTING