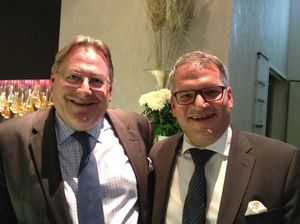 If you want three of the world’s best restaurants, think of Four Seasons (the restaurant, not the hotel, designed by Philip Johnson and Mies van der Rohe, 1959) in New York, The Wolseley in London (1919 Wolseley showroom, opened as a restaurant 2003 by Chris Corbin and Jeremy King) and Jack’s in Bern.  What do they all have in common?  They attract all ages and they are timeless. The gal, making this short trip back to Switzerland, wanted to catch up with two of the four people responsible for Jack’s, which is part of the Hotel Schweizerhof.  It was opened 1984, named for Jacques Gauer, long-time owner of the hotel, and it was really popularised by his son, Jean-Jacques Gauer, the hotel GM. Since the hotel was bought by Qatar in 2008, it has been completely re-done, while Jack’s has been slightly tweaked, by two other luminaries, Qatar’s hotel man in Switzerland, Bruno Schöpfer, and the hotel’s GM, Michael Thomann. 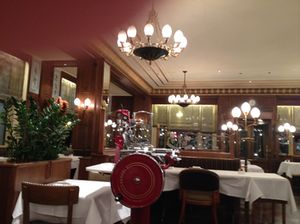 Jack’s, with its floor-standing, and much-used, slicer

Look at Jack’s, the epitomal brasserie fronting right on to Bern’s busy Bahnhofplatz, just across from the rail station. From 6.30am, locals pop in – at that hour, possibly only for a coffee.  From about 12 noon you cannot get a table.  Every space is taken. Many local regulars want their own special place, which they always have. Brass plaques at the top of really comfortable bankettes have regulars’ names. I sit in a seat marked for both Jimmy Martin and Ruth Metzler (do you think she sits on his lap?). The tables are exactly the right height – Bruno Schöpfer asserts that all tables should be 65-68cm off the ground for perfect customer ease. 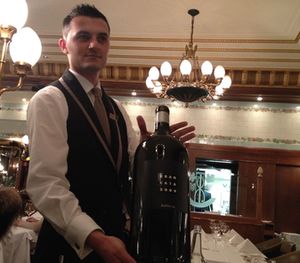 Tonight’s bottle, for red wine by the glass

I ask for a glass of red wine. What a surprise!  Since the 80-seat restaurant is busy every main meal hour right through closing, they know they can finish a six- or even a nine-litre bottle in one day (and it is always ‘good wine’, says Michael Thomann).  Tonight the barman presents an empty bottle of Brancaia 2009 Illatraia, and then a carafe holding what still remains.  He pours a measured amount into my glass, at the same time as a server brings a free platter of wafer-thin air-dried ham that I watched him personally hand-carve on the scarlet Berkel slicer that stands as one of Jack’s ‘sculptures’. Around us are young courting couples, elderly couples who eat here at least three times a week, and financiers come to do business in the Swiss capital. 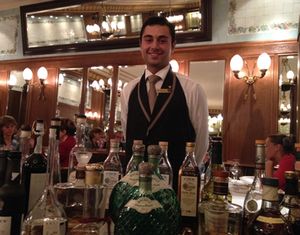 Michael Thomann beams with pride as he looks round this full restaurant. Within 18 months of its re-opening, he has made Hotel Schweizerhof best hotel in Bern, say consumers, via TripAdvisor, and its owners are happy (they look at occupancy and the average daily rate, highest in town).  I comment on how the hotel’s lobby lounge, next door, is also full from mid-morning through to night (the secret there is not only to have right-height tables but to have lots of small sitting areas, Bruno Schöpfer had said – and he added a cigar bar for good measure). 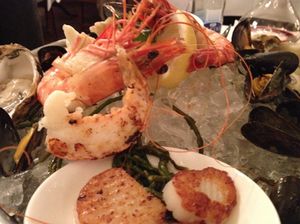 And I just love this type of food.  Jack’s gives customers what they like. Last time here I had one of the world’s best wienerschnitzels (this time I opted for salmon, poached exactly the way I want it).  Michael Thomann had tonight’s best-seller, a seafood platter.  Look around the other tables and at least half seemed to have the metal stands, like upside-down lampshade frames, that either hold ice-plates with seafood, or are ready to.  And when it is all over, another barman comes round with the drinks trolley, including a selection of grappas for every taste. I hear about barman Andy Walch, Swiss Cocktail Barman of 2013 for his Royal Tempation (plum, blackcurrant, Malibu and crème de mûre): he will be competing with it at the World Championship in Cape Town next year. 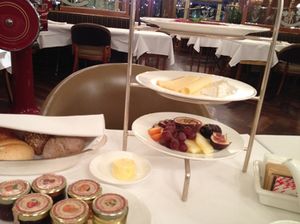 Breakfast is an elegant buffet-brought-to-you

All three of the favourite restaurants listed above do breakfast, and Jack’s wins high marks for the speed it can deliver.  Instead of a standard buffet, a selection of food is brought to you, which is undeniably wasteful but whether it is more wasteful than a usual buffet is debatable.  This method is certainly more hygienic and if the selection is what you the customer actually want, then I approve – but I have had this presentation elsewhere and there was not a single thing I wanted.  Here, a set continental breakfast, at CHR30, comes with your choice of juice, yoghurt, cereal and hot beverage. A bread basket comes with a three-tier stand holding meats at the top, cheeses, and fruits. Add CHF15 for the Schweizerhof Breakfast, and you have Birchermuesli and your egg choice.  And after all that consumption, I rush up the  74 carpeted stairs to the luxury hotel’s suite 301, and, Porsche Rimowa in hand, rush on to the train station and the next place.